Supriya Joshi checks out what the Sony Cyber-shot RX100 IV has to offer, and if it lives up to the legacy of its predecessors.

The fourth iteration in the line up of some very revolutionary cameras, the Sony RX100 IV is here, and we could not be more excited. We reviewers at the Better Photography team are constantly craving for the next new revolutionary device, and one series of cameras we admire is, indeed, belongs to the RX100 succession.

The RX100 was a game changer for the premium compact camera segment, when it had been launched in 2012. It was extremely pocketable, at the same time giving you the 1-inch sensor advantage. The next two cameras that followed built on the same design and kept adding performance enhancers—adding a hotshoe and BSI CMOS sensor in the RX100 II and adding an EVF to the RX100 III (the hotshoe is, unfortunately, gone).

So now is the turn of the RX100 IV to prove its mettle. Will it outshine its predecessors? Let’s find out.

Features
Right off the bat, what’s new with the RX100 IV is that it now features a 20.1MP 1-inch stacked CMOS sensor, the world’s first, according to Sony. The new sensor also promises to be better, faster and more efficient. We’ll see if that really is the case in the performance section of the review.

The other major upgrade to the RX100 IV is in the video department. The camera is now capable of shooting 4k (UHD) video with full sensor readout and bit rates up to 100Mbps. Plus, you can also make slow motion video up to 960fps. The only caveat of these features is that you will need to have a certain type of memory card to use them. The vast amount of data and the fast frame rates will require you to use a Class 10 SDXC or UHS-I compatible memory card to truly harness the capabilities of the camera. Anything lesser, and the camera itself will inform you that it will not be able to record anything in certain modes like HFR and 4k video recording. Other key features include an f/1.8-11 24–70mm lens, optical image stabilisation and 16fps continuous shooting. A Dual Recording function allows you to capture 17MP stills while recording up to 1080/30p video. The camera is incredibly fast. Shooting in the burst mode ensures that you wont miss the moment. Exposure: 1/2000sec at f/1.8 (ISO 250). Photograph/Supriya Joshi

Another upgrade to the camera has been of the EVF, which has been bumped from 1.44m dots in the RX100 III to 2.35m dots in the current version, and the scene you view through it as close to real life reproduction as it can get.

Finally, the camera is also equipped with WiFi and NFC transfers.

Handling
Cosmetically, the RX100 IV looks no different from the previous version… the only real way to tell them apart is the lettering on the camera body. It is just as pocketable and easy to carry.

The camera design is quite minimalist, with a smattering of buttons and mode dials for various specific purposes. The camera body itself is made from magnesium alloy, which feels quite sturdy in hand, but lacks a grip and can get quite slippery. A camera strap is included, however, and it would be wise to always wrap it around your wrist.

The tilting 3inch LCD screen of the camera is bumped up to 1.3m dots, and can be tilted to a full 180° upwards for self portraits and down by 45°. Touchscreen capabilities should have ideally been the next logical step for the company, but it is sadly missing. Also, a completely swiveling LCD would have bumped up the camera’s ergonomics a little bit more. That being said, the LCD screen is versatile enough to allow you to make shots from various angles without having to physically reposition yourself. 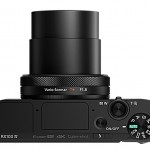 The Sony RX100 IV looks exactly like its predecessor, and is thus just as compact and pocketable as before. The magnesium alloy body has a sturdy feel, but is also quite slippery. The overall minimalist design of the camera is very appealing. 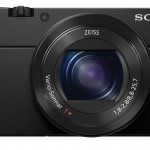 The top of the camera features an EVF and pop out flash with stereo mics surrounding it on both sides. There are dedicated buttons for both the EVF as well as flash. The control ring around the lens can be customised to control options like focus, step zoom, ISO and exposure. 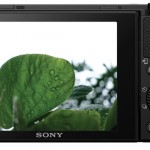 The rear features five buttons for various control options along with the control dial. They are packed in really tight, so if you have large hands, you may end up fumbling a little. The controller, the Fn button and the C button can be customised for various functions.

The EVF and the flash are recessed into the camera body and pop out by pressing their buttons respectively. Weirdly enough, if you push the EVF back into the camera body, the camera shuts off! This anomaly, if you will, was also found in the RX100 III, but you can change that in the menu. So, you need to be careful while using it.

A large dial around the lens of the camera helps you control variables like manual focus or aperture size. The manual function is especially useful when shooting video to quickly shift focus.

As far as customisability goes, the back of the camera features an Fn button as well as a C button. The left, right and center buttons of the mode dial are customisable as well. You can assign functions like Drive mode, ISO, AEL hold, Metering mode, White Balance and Grid line to any of them.

Using the camera’s inbuilt WiFi and NFC function, you can transfer images directly to your phone via the Play Memories app. Remote shooting is also possible, and this really helps in moments when you want to be inconspicuous.

Performance
The all-new sensor on the RX100 IV is the same size and resolution as its predecessors. However, the sensor type is Exmor RS, with a stacked CMOS sensor. According to Sony, this new sensor ensures faster data readout and better image and video quality. Despite the dimunitive size, the camera is a superb companion for your everyday use. You can use it to make a stunning visual diary. Photograph/Supriya Joshi

The image quality, to be honest, is not very different from what we saw in the RX100 III, which was pretty fantastic in its own right. What has improved is the speed and, of course, the video.

The high frame rate video feature is a delight to use. You can shoot 240, 480 or 960fps videos, with all footage being upscaled to 1080p. Within this high frame rate videos, you can shoot two different kinds— Quality Priority and Shoot Time Priority, where the former records two seconds of high quality video and the latter lowers the resolution and doubles the record time.

The ability to shoot video in 4K is just a massive step up from its predecessors. While you can only shoot 5 minute clips at a time, the video quality is absolutely beautiful. Another upgrade on the RX100 IV is the ability to use all focus modes while recording video, against the ‘wide’ mode available previously. The image stabilisation works really well while recording video, with minimal camera shake and smooth panning.

The camera uses the same lens as its predecessors, but is considerably brighter. The lens is consistently sharp, even at the telephoto end. The AF is fast and accurate in most lighting conditions.

Conclusion
The camera is amazing to use, but it left me rather confused about who the target audience for it would be. The form factor and speed of the camera can make it an excellent companion for street photographers… but the hefty price of Rs. 69,990 may deter many from considering it.

Videographers would obviously benefit from this camera, especially those who make vlogs. A lot of vloggers on YouTube these days have been upgrading to cameras with a front flipping LCD screen, so this could be a good choice for you if you’re looking to do the same. The RX100 IV is an incredibly fast camera, with fantastic AF abilities to boot. Rarely did I miss a photo because of it. Photograph/Supriya Joshi

However, if video is not your cup of tea, then maybe the RX100 IV is not the camera for you. It is an excellent device, no doubt, but in terms of image quality and performance, there are some minor improvements over the RX100 III (priced at Rs. 54,990), but not enough to really make it a worthy buy over it. On the other hand, you can also consider the Panasonic LX100, which offers 4k recording and is priced lesser than the RX100 IV. But if you have the funds for it, then go for the RX100 IV without thinking twice.