Ambarin Afsar really wants to like the Sony QX10 and QX100. While shooting, she has an amazing, yet frustrating time. Does the concept really work out?

Firstly, I’m really confused about what to call these nifty gadgets. Sony calls them lens-style cameras or simply, digital cameras, and my colleagues call them lens modules.

This is sort of symbolic of the current confusing positioning of the Sony QX10 and QX100. These gadgets act as unusual stepping stones between smartphones and DSLRs.

What’s Inside the Plastic
The QX10 has an 18.2MP 1/2.3-inch sensor, with a maximum aperture of f/3.3 and 10x optical zoom, much like a compact camera and substantially larger than the average smartphone’s sensor. I could wax eloquent about the colours that I captured with the lens modules. Shot with the QX100, this image looked like a burst of colour on the phone’s LCD screen.

On the other hand, the QX100 is a much more ambitious module. It is built on the lines of Sony’s RX100 II camera, and has an identical whopping 20.2MP 1-inch sensor. The QX100 offers an f/1.8 lens with 3.6x optical zoom. Both the modules connect to any Android phone using NFC and WiFi, along with a native PlayMemories app, and transform the phone into a giant viewfinder. Interestingly enough, you can also shoot ‘blind’ with the modules, however, obviously, composition goes for a toss. The modules use microSD cards and also offer inbuilt microphones for video recording and a tripod mount. 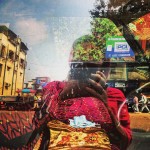 This Instagram edit of a self portrait shows the range of details captured by the QX10 in the overall reflection. 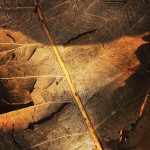 An extreme close-up of a leaf, edited on Instagram shows the QX10’s ability to render detail in highlight areas.

If you do not have access to a microSD card, you can also choose to transfer images to your phone’s internal memory, however, video recording requires card storage. Full resolution image transfers understandably take a few seconds

A Few Software Quirks…
I tried coupling the QX10 and QX100 with a Rs. 5000 budget Android, as well as the Sony Xperia Z and the connection worked without a hitch. When not clipped on to the smartphone, the WiFi connection ranged to an admirable 20 feet, and after that, the module disconnected on its own. But, the problem areas, and most of them related to the native app, became evident after that. Shot at the telephoto end of the QX100, this image shows very good sharpness and a decent amount of detail, considering how contrasty the light is.

Firstly, there is a tremendous amount of lag in the relaying of live feed. Basically, if you want to capture the enthusiasm of a kids’ party or even your cat gambolling around, forget about it. The kids would have dispersed and the cat would have made off with the canary. Also, the startup time of the modules is extremely slow, you need to touch the module to establish NFC and WiFi connectivity. A precious ten seconds or more are lost to this. If you are keen on street, nature, wildlife or action photography of any kind, then you need to wait till these modules seriously up the speed game. 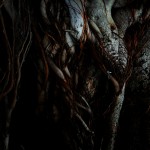 An Instagram edit of an image made using the QX10, this shows the amount of colour information recorded by the module. 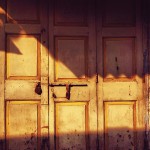 With both lens modules, Auto White Balance did a fairly good job. However, in this Instagram edit, I bumped up the warmth of the image by a few shades.

…and Suggestions to Iron Things Out
The app, in general, needs a relook. It does not allow you controls beyond the Auto and Program modes in the QX10, and the QX100 is only marginally better off with the option to choose the Aperture Priority mode. However, disturbingly enough, users cannot access ISO controls, Burst shooting or even long exposures. Considering the extremely quirky form factor of these modules, you’d want to try things like camera tosses and zoom bursts. The user is set on autopilot for most of the time, and low light shooting is also entirely dependent on the whims of the auto mode. Another thing I found sorely lacking was the ability to use the cellphone’s native flash. Both modules also do not have their own flash units. 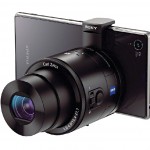 The modules come attached with a clamp that operates like an elastic band. You can leave the clamp on the phone. 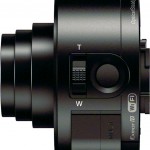 The USB port is near the zoom rocker and the shutter release, but the card slot is in the battery compartment. 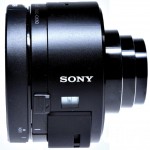 The QX10’s tripod mount is situated immediately beneath the lens and is helpful for figuring out orientation. 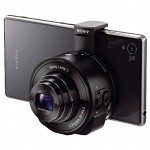 However, the QX100 makes the phone bulky, no matter where you place it. 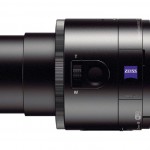 The QX100 has all ports and slots on the left, tucked neatly into a removable plastic door labelled Multi. 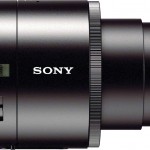 The little display window shows battery status, and whether you have inserted a memory card.

One thought that struck me was that since Sony has two of these modules, maybe it could program its app to allow control of both the modules at the same time. This would throw the arena open for experimentation and create novelty.

Delightful Image Quality, Yet Falls Short
Both the lens modules offer crisp images and punchy colours. The overall sharpness is really good and the modules perform well in backlit situations. However, the QX100 shows some purple fringing in extreme backlighting. The 18MP as well as the 20MP JPEGs are good for further cropping or resizing and plenty of information is recorded in the shadow/highlight area. This Snapseed edit shows just how sharp the QX10 can be when zoomed in to 10x. The zooming action is quite smooth, but the screen displays some lag.

However, I can’t judge the modules on their lowlight performance because despite offering fast apertures, the modules are compromised by the lack of manual controls. Also, what I find extremely strange is that Sony has not thought of including RAW shooting support, especially in the QX100, considering the fact that there are compact cameras that shoot RAW, offer you manual control and are priced way lesser. The modules are fairly inconspicuous. Even the bulky QX100 can be discreet, as evident in this railway vendor’s nonchalant pose. If anything, the modules evoke the curiosity of passersby.

Wait for Second Generation Upgrades
Priced at Rs. 12,900 and Rs. 24,990 respectively, the QX10 and the QX100 are only expensive toys for cameraphone users who want portability, better quality and instant sharing. While I really like the concept of the modules, it is sad that Sony has completely limited them from realising their true potential.