Sony’s mid-segment mirrorless offering, the NEX-5T is a powerhouse of features. K Madhavan Pillai finds out if it performs equally well.

Magnesium alloy construction, 10fps enabled with hybrid AF, APS-C 16.1MP, a tilting touchscreen LCD with touch focus point selection and touch shutter, sweep panorama, full HD video, a 16-50mm lens… all in a quick, responsive, light, tiny camera with a startup time of a few milliseconds! If I told you that this camera, with all of these features, is about half the price of a high-end DSLR, would you be tempted? I must admit that I was. Welcome to the NEX-5T… the successor to the NEX-5R and the very last Sony mirrorless E-mount camera to carry the NEX branding.

Features
The 5T is all but identical to its predecessor, the slightly less expensive NEX-5R, with the notable exception of the added advantage of Sony’s proprietary Near Field Communication (NFC) module built into the camera. It lets you wirelessly communicate with the camera using smartphones or tablets. For example, certain apps can be downloaded, enabling remote shooting and direct uploads of images.

Apps also add features like Lens Distortion Compensation, extra image processing options, timelapse photography and ‘Multi Frame’ NR. NFC is a very interesting feature because it lets Sony add functionality to products simply by releasing more apps that do specific things. In that respect, the 5T may not be the closest marriage we have seen between a camera and smartphone. But, for those serious about picturemaking, it is the most useful. Significantly, the camera has a hybrid AF system that uses both contrast and phase detect pixels reserved on the sensor for faster AF. This lets the camera enable a blazing fast predictive tracking AF at its 10fps Speed Priority shooting mode, and generally speeds up the camera in a big way.

Apart from a bevy of enjoyable shooting and scene modes, some of which will be familiar to Sony users (Sweep Panorama, Hand-held Twilight, Anti Motion Blur), the camera has some rather detailed controls for pictures effects, WB and colours. Flash is not built in. It is a part of the kit, though, and needs to be clipped on to the accessory port. Sony has equipped the NEX-5T with a LCD panel that
can tilt 180o upwards, all the way to the front, and
50o downwards, to enable shooting from a higher
vantage point. It does not flip outward, or swivel.

A power zoom (with manual zooming) 16–50mm (24–75mm equivalent) lens comes as part of the kit. The wide end is good enough for making self portraits at arms length with upto three individuals in the frame. It is extremely compact, making the camera almost pocketable.

Handling
The 5T is an addictive camera. I found myself snapshooting almost endlessly with the 5T. It fits well in the hand and the wide, tilting LCD panel helps with vantage points. There is no viewfinder. Because of this, I found myself shooting plenty of horizontal frames, but ignoring verticals, until I forced myself to do it.

Almost every possible shooting option can be found through the menu system. However, finding certain controls and functions within the menu is a bit quirky, with some options buried in unlikely menus. One gets used to this after a while.

Luckily, there are four programmable buttons and five dedicated to commonly used functions. Along with the input dials, necessary controls can be custom set onto the body of the camera. The touchscreen is quick to respond and also aids handling nicely, especially with quickly setting focus points and reviewing images. I found myself not needing the touchscreen all that often. 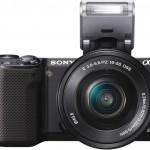 On the hand grip is an infrared receiver, for use with the wireless remote. The camera’s AF-assist illuminator can also be used as a self-timer lamp as well as redeye reduction lamp. The front of the camera is quite nondescript otherwise. 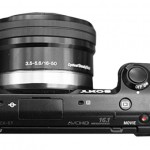 A chunky, nicely rigid switch surrounds the shutter release button. The single ring on the lens can be used for power zoom or MF. Screwing the flash into the acessory port is fiddly as there’s not much for your fingers. The main input dial is quite a pleasure to use. 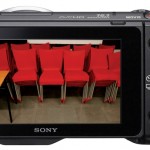 When the flash is attached, the LCD cannot move into its 180o position for self portraits. The 3-inch LCD is of extremely good quality though. I never quite enjoyed Sony’s menu systems. Thankfully, the touchscreen, dedicated buttons and customisation possibilities help.

Performance
The lens is quite sharp and it is not prone to flare or other serious chromatic aberrations. The RAW files display significant distortion and light fall-off, but the camera corrects it quite brilliantly. With Sony’s profile on Lightroom, the same corrections are easily possible with the RAWs as well.

With JPEGs, I thoroughly enjoyed the brilliant colours the 5T was giving me, and liked using almost all the various colour settings and picture effects, to the point where I was constantly having fun exploring various modes and settings that the camera has to offer. I was not satisfied with JPEGs at ISOs higher than 3200. Sony’s High ISO NR was too aggressive and smoothened details, even set to Low. It could not be turned off. Even in the Speed Priority mode, AF managed quite well even at the telephoto end of the lens, where I expected it to falter. But it needs good light for it to work quickly. In low light levels, AF slows down, but locks well enough.

Conclusion
The NEX-5T is an enjoyable, feature packed, performance-oriented camera. Add to this the bonus of having an expanding set of features with every app released by Sony for NFC! It is available for Rs. 42,990 for the kit. My only disappointment was to find that a number of the apps needed to be paid for… almost as if I am being asked to pay for features that could have existed in the camera from the beginning. Yet, considering that its performance is on par with DSLRs and can boast of features other APS-C DSLRs do not have, it is a rock solid price. Straight out of the box, colours are nice and punchy. My affinity for colours saw me use the Vivid setting quite frequently, and I thoroughly enjoyed what I got. Photograph/K Madhavan Pillai

If you don’t need NFC, the NEX-5R is an unbeatable proposition for Rs. 4000 less! Also, Sony’s lens lineup is not as extensive as it should be. If you need an expandable system, you should consider the Olympus PEN E-PL5. If you need a viewfinder, the NEX-6 is the best choice for Rs. 9000 more. At this price point, DSLRs like the Nikon D5200 begin to look attractive, but at the cost of portability and weight. As it stands, the NEX-5T is a worthy camera that offers excellent value for the NFC user. I found myself regularly underexposing by -0.3EV, for details in highlights. Shadow details from the RAW files were easily recovered in post processing. Photograph/K Madhavan Pillai

Who Should Buy It?
Tech-loving hobbyists who enjoy quick snapshooting, and can use NFC connectivity options.

Why?
The NEX-5T is a small, self-sufficient, feature-packed kit. It has many fun, addictive modes, and can lend itself to experimentation. It performs well in most situations.