Read through the specifications and you will realise that the mid to pro-level Sony Alpha 77 (or A77) is possibly the most unconventional DSLR to be produced. In fact, considering that the mirror does not move, it ceases to be a ‘reflex’, thus prompting Sony to call this type of camera SLTs.

The mirror is translucent, allowing most of the light to pass through to the imaging sensor. A small portion is reflected upwards towards the phase detect AF sensors. This eliminates the need for a mechanism to move the mirror and an optical viewfiner assembly, making the design and construction simpler, and theoretically more sturdy. The windows in my house at night can really test cameras. RAWs packed in detail. The JPEGs fell apart. Both had more noise than I would have liked. Exposure: 10sec at f/11 (ISO 800). Photograph/K Madhavan Pillai

Features
SLTs are fulltime live view cameras, necessitating an electronic viewfinder (EVF). With the A77, Sony has obviously decided to pull all the stops with an absolutely class-leading 2.4MP XGA OLED Tru-Finder EVF that is almost as large as a regular 35mm optical finder.

The A77 also allows extremely quick, fulltime phase detect focusing for videos, and enables AF during its blazing maximum framerate of 12fps at 24.3MP (neither of which the Canon or Nikon flagships can do).

Oddly enough, the only other camera that delivers an equivalent resolution is the entry-level Nikon D3200, tested in our last issue. While 24.3MP is an overkill for beginners, an advanced user would find it useful… if it can deliver quality.

What this camera can also do (that no other DSLR can) is full HD 60p AVC AVCHD video which gobbles up media at 28M28Mbps, while allowing complete exposure control in the PASM shooting modes. It also gives you the option of recording video in the computer friendly MPEG-4 format.

To allow the A77 process such voluminous data at high speeds, the sensor is coupled with a new BIONZ imaging engine. The downside is that the buffer is only good for 13 RAW + JPEG images.

The A77 features in-camera stabilisation (again unique to SLTs), built-in GPS, a three-way tilt swivel 921k LCD, AF micro adjustment, and a A19-point AF system with 11 cross-type sensors. The shutter is rated for 150,000 cycles and it can shoot at a maximum shutterspeed of 1/8000 sec.

Apart from a range of shooting and editing modes, the A77 sports in-camera HDR, multi-frame noise reduction, and panorama and 3D panorama modes. It can also detect and register faces. The sweep panorama mode creates images of 12416 ×1856 pixels (for horizontal) and 2160 ×5536 (for vertical). Considering how fast the processor works, this is rather low. Yet, the SLTs are the only cameras (amongst DSLRs) able to do this.

The A77 has a solid, weather-sealed magnesium alloy body, with the top made of tough plastic. The external connectors, which include stereo audio input, HDMI ouput, USB and flash sync, are all well protected by rubber covers.

Handling
When a camera is built for speed, a lot depends on the feel of the camera. The A77 takes a while to get used to, but once you have customised the buttons, it handles well. The quiet chatter of the shutter is especially refreshing after handling cameras with clattering mirrors.

The menu design, though, needs an overhaul. There is also a slight but irritating lag on the LCD display while changing settings. After a while, I was changing ISO settings faster than the camera displayed it! The lag is not present while shooting images, except in the 12fps mode, where the camera plays back previous images. All the same, with a bit of getting used to, 12 fps is a huge advantage for some types of photographers.

The limitation in the 12fps mode is that the aperture is locked fully open for the AF sensors to get enough light for Continuous AF. At apertures smaller than f/5.6, the AF system cannot function effectively enough for the speed. For aperture control during 12fps shooting, you need to switch to MF or AF-Auto. Alternatively, you can opt for the Standard Continuous High mode of 8fps, which is still respectably fast.

The OLED EVF is exceptionally good. An OVF could have bettered it only in extremely low light situations, where the EVF throws up noise. It also allows you to see the frame in live view, unlike other DSLRs where the OVF blacks out as the mirror goes up. 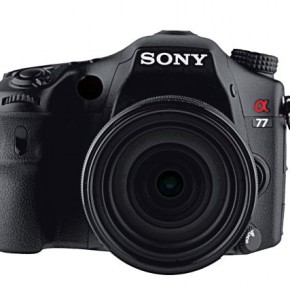 The contoured, rounded A77 feels good in the hand. Despite not having an optical VF assembly, the hump makes the SLT look a lot like a DSLR. It houses the flash and the microphone. The front is dominated by the rather large AF assist lamp. 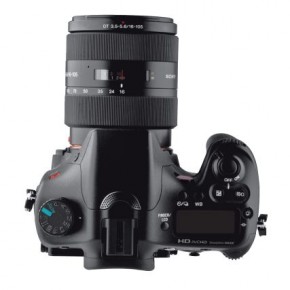 The dial on the top panel conveniently rotates between various commonly used shooting modes. A big gripe with Sony always has been about the non-standard hotshoe inherited from old Minolta cameras… just to sell the two models of Sony flashguns available in India. 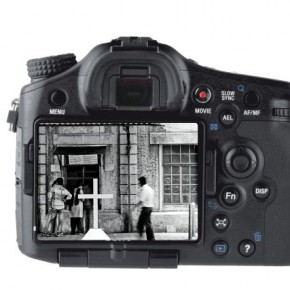 Initially, the button placements seem rather complex. In fact, they are radially aligned for the thumb and are easy to use after a while�. The A77 is the most customisable Sony camera in terms of its operations and most functions require a single-handed operation.

Performance
AF performance is speedy in good light. Despite the excellent sensor stabilisation, I found too many instances of blurry images with Continuous AF while tracking with the kit lens. At shorter distances, the AF assist was superbly effective in almost complete darkness, even on surfaces with virtually no contrast.

I quite liked the light, versatile Sony DT 16-105mm f/3.5-5.6 lens (24-157.5mm equivalent) being offered in India as a part of the kit. However, it is slightly slow to focus, lacks critical sharpness at the mid and telephoto end for a 24.3MP sensor, and thows up noticeable chromatic aberrations at both ends of the zoom range.

At low ISOs, the sheer level of detail, dynamic range and colours in images were quite stunning. The high ISO performance was a little disappointing. Noise reduction in the A77 does not correct the profusion of ‘hot’ pixels that emerge at shutterspeeds of 10 seconds or longer.

While the RAW files were superb, the JPEGs unfortunately were poor, with both noise reduction and compression artefacts affecting the quality of the image. This large languid lizard posed just for the A77. I was quite happy with both the colours and the details that the sensor was able to punch out. All those pixels also meant that I had to be very careful while shooting. Errors can be magnified too. Photograph/K Madhavan Pillai

Conclusion
With the A77, Sony has come close to perfecting the design and engineering of SLT technology, which clearly has its advantages over the competition. However, in terms of image quality at high ISOs and JPEG processing, the A77 seems to be two years behind.

That said, if framerates, AF during video, its innovative shooting modes and its EVF are important to you, the Sony Alpha 77 is well worth its MRP of Rs. 69,990 for the body. Not only is it the least expensive amongst similar mid-level options (the Nikon D7000 and the Canon EOS 7D), it beats far more expensive cameras on many fronts.

This brings me to another important point. Sony India has always lagged behind the rest of the world when it came to introducing new products. The A77 is now available almost a year after its launch in August 2011. To be considered a serious contender, Sony urgently needs to take a leaf out of the Nikon and Canon success story in India. With both B&W JPEGs and RAWs, I was thrilled with the level of recoverable latent detail and the camera’s ability to render finer tones in tough situations. I found myself confidently pushing contrast levels for B&W JPEGs straight out of the camera.