Ambarin Afsar takes the Sony Cyber-shot DSC-H55 out for a spin and discovers that this tiny camera is a bundle of superzoom capabilities, usefulstill and video features and ease of use.

The Sony Cybershot DSC-H55,launched in February this year, is the latest addition to Sony’s popular H-series of superzoom cameras. The H55 is packed with a number of automatic modes and is targeted at an audience looking for a budget superzoom camera with HD video capabilities. On paper, the camera offers something to everyone—from the basic user who wants to shoot snapshots to the serious enthusiast who needs a considerable amount of manual control.

Features
The Sony Cybershot DSC-H55 is a 14.1MP camera with a 10x zoom Sony G lens that gives an effective focal length of 25–250mm (35mm equivalent). The extremely widefocal length of 25mm provided by the camera exceeds the wide angle capabilities of most superzoom compact cameras. However, instead of using a backlit CMOS sensor (which is theoretically better forshooting in low light), the camera sports aCCD sensor. For users looking for more automation, the camera offers 11 Scene modes and three other auto modes called the Easy Mode, Intelligent Auto (iAuto) and Program Auto.The inclusion of the Easy mode seems superfluous, considering the fact that the camera already has an efficient iAuto mode. One of the most useful features of this camera is a Manual mode that allows users to adjust shutterspeed, aperture and ISO values. However, users can only choose between a choice of two aperture values while using this mode.

Handling
The DSC-H55 feels sturdy and fits snugly in your hands. It is sleek and slips unobtrusively enough into the pocket. Around the back, the camera has fourway control buttons for adjusting the flash,smile detection, activating the self-timer as well as changing values while shooting in the Manual mode. However, these buttons are rather cramped, so users might find themselves pressing the wrong button accidentally. If you have large hands, you might just need to rely on your fingernails to navigate the controller! Also, we missed the option of having a dedicated video shooting button—the H55 has a less convenient VideoShooting mode on the top dial. Navigation is simple, and the menus and sub-menus are well-labelled and are fairly easy to navigate. One can also adjust the brightness of the LCD screen while shooting in bright conditions.

Performance
On inspecting the images shot, we were pleased to see that the H55 delivers images with accurate, vibrant colours. The images are sharp, with only slight softening occurring in the corners of the frame. The lens’s control over chromatic aberration is admirable, given its 10x zoom range. But,purple and red fringing becomes slightly more apparent in the corners while shooting at the extreme telephoto end of the zoom. The noise performance of the camera is competent up to ISO 800 and begins degrading after that. However, you will be heartened to know that pictures taken at ISO 1600 setting are also useable in emergency situations. Interestingly, the camera has two bracketing features that make it worth your while. Exposure bracketing takes three photos, one at the exposure selected by you and two more at +0.3EV and -0.7EV. Similarly,you can also bracket White Balance. Unfortunately, the battery of the DSC-H55 lasts barely a few hours and issignificantly affected by prolonged use of zoom or by using the Sweep Panoramamode. This popular mode found in a lot of Sony cameras, allows the user to shoot a panorama within seconds. However,the camera lacks the Intelligent Sweep Panorama mode that compensates for any moving elements. Also, one major problem we found only while using this mode was the large number of compression artefacts, loss of quality and detail—we have not noticed this problem while using the same mode in other Sony compact cameras.

Conclusion
While the image quality is not the best in its class, the H55 is an extremely competent camera. It also features manual control, HD video and 10x optical zoom—all this at an extremely reasonable price. Regardless of whether you want to hone your photographic skills and explore various shooting situations or simply point and shoot, this camera manages it all! 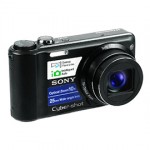 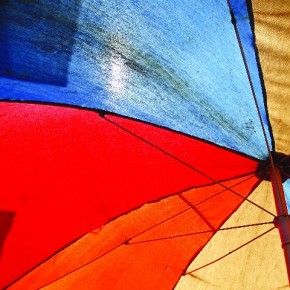 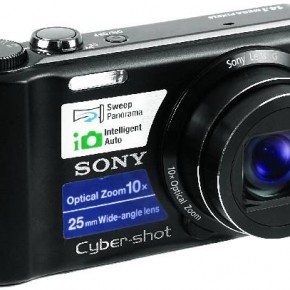