Sigma fp: The Environment, Performance, and The Promise

Santosh Thundiyil puts the Sigma fp to the test within his highly specialised, oft uncompromising domain of mainstream cinema. 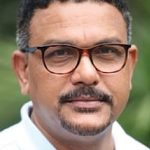 Santosh Thundiyil
An alumnus of FTII,
Pune, Santosh is
an award-winning
cinematographer
with a large number
of mainstream films
to his credit (Kuch
Kuch Hota Hai, Krrish,
Rowdy Rathore,
Rustom, Neerali…
to name a few).
Having used all kinds
of gear for his work,
he believes in control
being as critically
important as vision
and creativity.

Before I express an opinion, I believe it is important to talk about the prevailing environment today, and then view the Sigma fp in this context. Cinema and cinematography is at the crossroads, and being challenged by all the various possibilities offered by the future. The challenge is that of taking a direction where the roads are not clear. As technical creators and artists, with budgets to consider, we are all on a brilliant, explorative expedition.

Does the end justify the path? Is the medium becoming more of self expression, of mass entertainment? Is the process now easier? Is it less technical? From the massive, super-heavy, immobile cinema cameras relegated to remain within studios in the past, to more fluid and manageable cameras of the last few decades, to lightweight and mobile cameras, and now, finally, to the tiny, pocket-sized miniature devices. And from old, large movie theatres with projection rooms to cellphone screens. Some may lament about what is lost, but I don’t see any right or wrong, good or bad. It is a question of evolution and what you need along with you on your journey. What I consider right could be wrong for another. But we are certainly lucky to have choices. The journey is on!

There are two things I love about this camera. One… It looks and feels like a small piece of military-grade hardware. The placement of dials, buttons and switches make it easy to navigate. I am very impressed by the switch that flips the camera from still to cinema mode, and that it changes all its menus and functions accordingly.

Two… The scalability and modular nature caught my imagination. In Indian mythology, there are these tiny animals or meek humans, who can transform into massive and enormous forms. I could not help but think of the Sigma like that. Here is a beautifully designed, compact pocket cinema camera that can transform with its adaptive capabilities into a workhorse. The possibilities of extensions and accessories and attachments are extreme, and can be done according to requirement.

From a production point-of-view, this makes it a good choice for different kinds of users with different purposes, especially for those who change their mind often. Even in a professional environment, this happens.

A tiltable screen, which would have been of great use for any kind of user, is lacking. Of course, you can always attach a screen, as it happens in cinema production. But the convenience of having the worlds smallest cine camera with its own tilting screen would have been of great help for cinematographers to experiment and search for suitable angles.

I have examined the fp more from a cinematographer’s perspective, because it is launched as a pocket cinema camera. My initial impressions—full frame sensor, 12-bit Cine RAW, UHD4k, FullHD at 120 fps—It all sounds very impressive.

What I really loved about the fp was this… The camera has different tone and colour options, accessible directly from the camera body with buttons, and then easily customisable to a fine level. Yet, what impressed me more was that in just the Standard colour mode, the colour reproduction is excellent. Even when you know that these colours can be manipulated later in post, the native colours and textures are very true to life. As a cinematographer, this made me feel immediately connected to the Sigma fp.

I tested the fp with my Sekonic light meter to see whether the claims made by Sigma regarding the sensitivity and range of the sensor is up to the mark. I have always found that the claim of dynamic range by all camera makers are like the fuel efficiency claimed by vehicle manufactures, with the caveat… under test conditions only. Thus, the dynamic range is 12.5 stops.

The low light capabilities of the Sigma fp showed a very good level of control, without too much noise or grain showing up.

To my surprise, I also found that the exposure levels set by eye using the reference of the LCD screen matched with the reading given by my Sekonic. In my experience, this is seen with the Arri Alexa, and not many other cameras.

A full-time dedicated electronic shutter is a convenience. Basically, with cinema, it means fewer options to contend with, as opposed to cameras that have hybrid shutters. The rolling shutter effect was also not apparent, but then I would be using a camera with a global shutter for fast-paced action.

I tested the fp with three kinds of lenses—Sigma Art and Contemporary series (using the native L-mount), and then cinema lenses with Sigma’s PL adapter. Personally, I prefer cinema lenses for the control it offers, but native L-mount lenses have the benefits of both size and cost, and there are plenty of options. Also, Sigma’s Canon EF mount adapter gives you the option of using your canon lenses on the fp.

On the other hand, the Sigma fp is capable of recording UHD in 8-bit (FHD at 12-bit, 119.88fps in 8-bit with an expected firmware upgrade), in CinemaDNG, in-camera, which is not possible with other cameras, making it extremely useful.

Unfortunately, a big disadvantage is that you cannot play CinemaDNG in-camera. In the field, this can prove cumbersome. Unless you are carrying along a laptop with DaVinci Resolve loaded, or unless you use other external devices, you cannot see the video immediately. Luckily, Sigma’s next firmware update, due to be out soon, promises to add this feature.

As a cinematographer, certain standard features are important but missing in the fp. There is a color mode called ‘Cine’ but it is not LOG. Like the ‘Cine’ colour mode, there are various modes that act like LUT (Look Up Tables), but LUTs are absent. But then again, if you are shooting in CinemaDNG, these are unnecessary, because you can do whatever you
need to in post. But they become necessary when you are shooting in other formats, and hopefully will be made available with a firmware upgrade.

The USB 3.1 allows recording directly to your laptop, which is also an advantage. The battery lasts for about 40 minutes. But there is the option of using an adapter for external batteries, and external power source as well.

Audio level settings are available, and there is a microphone socket. There is no provision for XLR inputs or headphones. But, again, for serious production, audio is recorded externally.

The fp has focus peaking, frame markers and frame lines, and time codes. You can switch to shutter angle instead of shutterspeed, and it supports t-stops if you are using the fp with a Sigma cine lens. The fact that this is supported gives you the full feel of a cine camera.

The AF is sensitive, and there are not too many options to control its behaviour, which is actually good implementation with only contrast-detect available. While recording, using Touch AF from the LCD touchscreen, to move focus from one point to the other, does a very good job in shifting slowly and smoothly. For the most part, I would expect MF to be used.

The Director’s Viewfinder emulates the frame of almost every model of Red, Arri or Sony cameras (HD, 1:1.33, 1:1.88, 1:2.35, etc). With adapters, a director can even use the same lenses as the main camera. This is an innovative value addition. A firmware update plans to allow recording through the Director’s Viewfinder as well.

I cannot help but feel excited by the Sigma fp, its RAW recording, and its amazing scalability in so many different ways. It could make a huge difference to an imaginative, small budget, serious filmmaker, or to a budding cinematographer, who can now plan to expand and grow a system that he or she can own and practice with, without constraints.

I must mention the impressive colour science of the fp, and the range of usable ISO. The whole look and feel of the image and the camera itself is impressive for its price range. I can imagine its use in a serious production as a ‘B’ camera. But I am looking forward to do a more exhaustive field shoot and a detailed endurance test.

This article originally appeared in the March 2020 issue of Better Photography.