The S6 Edge has incorporated a feature that can launch the camera by doubling clicking the home button. Samsung claims that it launches in under 0.7sec. I can tell you that it is very fast and I have been completely spoilt by it.

The Galaxy S5 was awarded our Android Smartphone of the Year. Aditya Nair finds out what its successor, the Samsung S6 Edge, has in store for cellphone photographers.

Until last year, I wasn’t really a fan of Samsung phones. That is, till the launch of the Galaxy S5. As a cameraphone, the experience was nothing short of spectacular. An incredibly good 16MP sensor, blazing fast AF and weather resistant to boot. The last of which I am a huge fan of, both because I enjoy shooting in the rains and I have, what I describe as, an acceptable level of clumsiness. The only negative was the plastic design, which the company has finally changed with the S6 and S6 Edge. The effects of the realtime HDR are quite subtle and I had no problem leaving it on most of the time. Additionally, it doesn’t it affect the AF speed or cause any shutter lag. Photograph/Aditya Nair

Beautiful Design, but Functional?
The metal-and-glass build and curved screen make the S6 Edge a very good looking phone. Simultaneously, the new 1440 x 2560px Super AMOLED screen is one of the most colour accurate screens I have used. The S6 Edge uses Corning Gorilla Glass 4 which is supposed to be the toughest available glass. However, given the extra screen space, I was absolutely terrified of dropping the phone, Gorilla Glass or not. Using sliders on apps like Instagram isn’t as easy with this screen. Sometimes, the screen was unable to recognise that I was sliding my finger across. It can also become difficult to make fine crops when a part of the image that you are cropping enters the curved edge of the screen.

To make it slimmer, it is also a unibody phone, which means memory is inbuilt and you can’t swap the battery. However, the Samsung is quite quick to charge and can be charged wirelessly as well.

A Phenomenal Shooter
The S6 is a superbly specced phone with a number of great features. It boasts of arguably the best cellphone sensor (16MP) and lens (f/1.9) combination in a smartphone (as rated by DxOMark, which we have to agree with), and optical image stabilisation. With realtime HDR, you can see the boost in dynamic range before you shoots. AF has been improved with the inclusion of fast AF tracking as well. On the video front the camera can shoot 4k video at 30fps, Full HD at 60fps and HD video at 120fps. OIS, HDR and AF tracking for video, however, are restricted to 1080p30 video and below. Wedding LEDs can cause havoc with most sensors. Despite this, the S6 Edge managed to do a fairly good job with the colours. Photograph/Aditya Nair

What’s Missing?
Two major flaws for mobile photography enthusiasts are the lack of a dual LED flash and RAW capability. The S6 Edge sticks to a single LED flash, which results in colour tinges, especially when shooting in artificial light, and for the most part, makes using the flash useless for photography. Despite running Android 5.1, which by allows RAW capability, the S6 doesn’t allow you to shoot RAW yet (whether a future update will allow it remains to be seen). In addition to being able to exploit the phone’s superb sensor to its full potential, allowing RAW would mean that you aren’t beholden to the JPEG algorithm that Samsung runs, which results in over saturated images and aggressive softening. You are also limited to ISO 800 which is unfortunate. Noise performance at ISO 800 is very good and another stop or two ISO would have still yielded usable results while further improving low light capabilities.

Is it for You?
With the S6 Edge in hand, I travelled through the summer heat of Mumbai and Jaipur, misty weather of Pelling, for a photo walk organised by Samsung, and the monsoons of South India, with practically no trouble at all. While we rave about the Xiaomis of the world for offering phenomenal specs at cheap prices, this phone offers a level of finesse that makes it a worthy purchase. 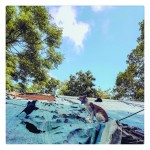 From the moment the crow dared to approach the cat, I was expecting a face-off. I wasn’t disappointed. In an offensive manoeuvre that would make Sun Tzu proud, the cat yawned scaring the crow away. All of which got captured frame by frame with the 30fps burst mode. Photograph/Aditya Nair While Selective Focus modes have been around for a while now, the S6 Edge manages to create the most realistic look of shallow depth of field. Photograph/Aditya Nair