The newest in Ricoh’s lineup of rugged cameras is the Ricoh WG-4 GPS. Does it truly deserve to be called a successor? Natasha Desai finds out.

Rugged cameras are fun to use. They can withstand the cold, slip from your hands, fall underwater without you being scared of your money going to waste. The Ricoh WG-4 is the latest in the Ricoh Pentax lineup of rugged cameras. The predecessor of the WG-4 is the Pentax WG-3. Apart from the change of name, what does the successor have to offer?

Features
The WG-4 comes in two versions, one with GPS and one without. This test has been conducted with the one with the GPS. The WG-4 is a 16MP shockproof, coldproof and crushproof camera. Also, it is waterproof up to a depth of 45 feet, can withstand a 6.6 feet drop, survive cold up to -10°C and take 100kg of force. The camera features a 4x internally stacked optical zoom lens and its maximum aperture is f/2 at the wide end. All of which are the same as in the WG-3. One addition to the WG-4 is the Shutter Priority mode. This mode now gives you more control than the WG-3 did. The more significant addition, however, is the range of camera mounts that come with the camera. We tested the suction mounts on a car for this review. Also available are handlebar clamps. All these accessory additions seem to be a direct competition to pure action cameras like the GoPro.

There are a few other interesting modes such as High Speed video capture at full HD and an HDR mode. The camera also has a time-interval capture mode which was ideal when using the car mount. It lets you capture up to a 1000 images at regular intervals. Also present is the Macro light with six LED lights, the same as its predecessor, as well as a Macro Movie mode.

The 3-inch LCD has a 460k dot resolution with anti-reflective coating. Apart from few features there is no major update from the WG-3 as such, even the price remains the same. The specifications are almost identical. Sadly, the wireless charger that came with the WG-3 was discontinued with the WG-4.

Handling
The camera does not have a proper right hand grip and was difficult to hold onto with one hand. A lot of times, I found that a perfectly good image was ruined because my fingers were visible, due to its bulky grip. The buttons leave no room for your thumb and are tad hard to press. I would have preferred the shutter release button to be placed where the power button is instead.

Testing the camera was a lot of fun. The camera was dropped several times from a height of 6 feet, used with continuously running water and even kept in a freezer for a while. The camera withstood all the tests without a dent. However, the LCD proved to be not as durable, which was a disappointment. Viewing it in bright light was troublesome.

Performance
The WG-4 produces correctly exposed images with good colours. When the camera is exposed to water, the focus can be a little soft because of the lens fogging up. The drops do slide off the lens quite easily though. The lens is prone to fingerprints and I had to keep wiping it if I happened to touch it by mistake.

The image quality is decent at ISO 800, but only if you are not looking to make large prints. The camera takes its own time to save data onto the memory card, even if you use a class 10 card.

The battery life too leaves much to be desired. According to CIPA standards, camera takes 240 shots per charge, which is the exact same as the WG-3 and nothing to really boast of. After about two to three hours of continuous shooting, the battery died. When shooting continuous video, the battery lasts only about one to two hours. Turning the GPS on only worsens the situation with the battery dying out much faster. The car mount that I used was exceptionally good, with the mount latching on firmly to the car’s surface.

Conclusion
At the end of the day, the WG-4 is a fun camera to use. For a family, vacation memories will be easy to preserve and no matter what activity, the camera will be safe.

The Olympus TG-3 has the same zoom range and comes with WiFi and an Aperture Priority mode, at a much affordable price tag. Even so, the excellent build quality, fun shooting modes and camera mounts make the Ricoh WG-4 well worth its Rs. 23,995 price tag. 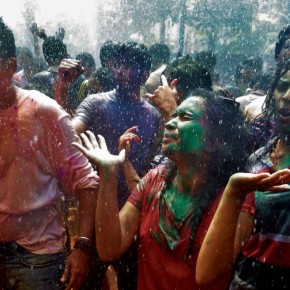 The Shutter Priority mode was able to capture the entire scene with the water drops in pretty good detail. Exposure: 1/2000sec at f/2 (ISO 250). Photograph/Akshay Samarth 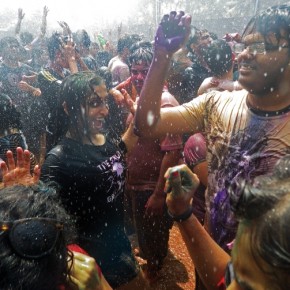 Who should buy it?
Families with children can use the camera when on adventure holidays or for any outing.

Why?
It is a super tough waterproof camera and is one of the best in the lot. Also, there is no fear of damaging the camera if children use it or because of an adventure activity.