Quote of the Week by Roger Ballen 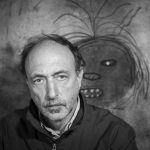 “When somebody looks at something as wire-ly as, say, a Miró painting, this issue is never ‘what is this about?’ It’s just seen as an abstract line. In photography, since the basis of photography is ‘capturing reality,’ people always want to know what the meaning of the wires is. In painting, you don’t ask that question.” —Roger Ballen (1950)

Roger Ballen is an American photographer whose dark, eerie images of the South African social landscape have captured international attention. Often focusing on the downtrodden and underprivileged residents of rural Afrikaner villages, his work features abrupt juxtapositions between people and their environment in stark, black-and-white compositions. His practice is often described as painterly, and he has cited Joan Miró as an influence. Ballen studied psychology at the University of California Berkeley until, prompted by his mother’s early death, he set off on extensive world travel in 1973. After receiving a PhD from the Colorado School of Mines, Ballen moved to Johannesburg in 1982, where he has lived and worked ever since. He is the recipient of such awards as the Citigroup Prize in 2002, and his work can be found among the collections of the Stedelijk Museum in Amsterdam and the Galería la Aurora in Murcia, among others.