The Panasonic LUMIX DMC-GF3 is small, powerful and quite a good proposition on paper. Raj Lalwani sees what stops it from making it big.

Imagine using a pink camera. No, seriously… imagine that you have decided to explore a new place—a neighbourhood that has some interesting subjects, a few heartstopping moments and a collection of great photographic opportunities. Just before you set out to shoot, your colleague tells you that you will be reviewing the camera that has just come into the office. You are pleased at the prospect of using an interchangeable-lens camera like the Panasonic GF3, until you remove it from the box. And then, you realise that it is pink.
Call me a traditionalist or plain old boring, but I have always believed that cameras should be black. Okay, grey sometimes, white maybe, but I have always been rather amused at compact cameras that are coloured red, blue, yellow or green. In the past one year, the trend has escalated further. Now, some companies also releasing DSLRs and other interchangeable lens cameras in various colours! Take, for example, the Panasonic LUMIX DMC-GF3, the company’s latest mirrorless camera. Besides the claim of being one of the smallest mirrorless cameras in the market, it also comes in various colours—black, white, brown, red and, you guessed it, pink.

Features
The feature set of the 12.1MP GF3 is extremely minimalist. It is not an upgrade, but a simplified version of the GF2 (which, in turn, was a simplified version of the GF1). This has led to the omission of a lot of features. For instance, while shooting Full HD video, the camera records only mono sound. It is the first Micro Four Thirds camera that cannot be used with any sort of viewfinder—electronic or optical, inbuilt or detachable. Moreover, it does not even have a
hot shoe!
The processor has been improved, which means that the sensor can now read data much faster, thus allowing a faster frame rate of 3.8fps and improving AF performance. I particularly enjoyed the new Pinpoint AF mode, which gives more precise control over the choice of AF point than most other cameras.
Other new features targeted at compact camera users are a new Intelligent Auto Plus mode and Creative Control processing filters that are similar to the Art Filters found in Olympus cameras. However, most of the Creative Control filters are quite boring, apart from an Expressive mode that increases the contrast and saturation.

Handling
I was a little apprehensive about using the GF3. Usually, cameras that are so small compromise a lot in terms of ergonomic ease and handling. Admirably, the GF3 incorporates a rather efficient user interface that made it easy to change camera settings quite fast.
The Quick Menu lets you choose up to 10 functions that you would want easy access to, much like the customisable homescreens that are seen in modern-day smartphones. The touchscreen functionality, though, is nowhere close to smartphones.
The Touch AF does help in stealth shooting. I used the GF3 with the pancake 14mm f/2.5 lens, which is a part of its dual lens kit. The camera-lens combination is so tiny that I actually managed to cover the entire camera with my hands, with only the lens peeking out. The touchscreen helped to lock focus and trigger the shutter. Most people around me did not even realise that I was using a camera!
The build quality of the camera is quite good, but the flashgun is really flimsy. Moreover, it is placed right above the lens, and causes the ‘red eye’ phenomenon in a lot of photos. Worse still, when I tried using the 14–42mm kit lens at a friend’s birthday party, the flash left an ugly shadow in all the wide-angle photos. Finally, there is no flash exposure compensation in the camera!

Performance
The first time I used this camera was when I was sitting by the window in an airplane. We were just about to land in Hyderabad. It was my first visit and the city looked quite beautiful from above. The silent performance of the camera helped me capture a few scenic views, but I soon realised that to get good-looking photos within the camera, I needed to adjust the Picture Styles. Even then, I found that the image still needed to be fine tuned on the computer to get pleasing results.
It must be said that the company has improved its JPEG processing engine by a great degree, as compared to the GF1, which produced poor quality JPEG files. Unlike the GF1, there is no oversharpening problem and while noise reduction is still quite severe, one has the option to switch it off whenever needed. Due to this, I did not find it necessary  to shoot in RAW too often.
When I did shoot in RAW, the camera took its own time. After three continuous frames of shooting RAW + JPEG, the camera would pause for a bit, then shoot one more frame and then wait to write the images on to the card. This is not as fast as other cameras in the same price bracket.
At higher ISO settings though, the camera does not inspire the kind of confidence that some other mirrorless cameras do. At ISO 3200, the colour noise is quite aggressive. ISO 6400 shows a colour shift and is quite unusable. The AWB function does not perform well in rooms that have tubelights and tungsten lamps, leaving a rather unsightly colour cast. The metering tends to underexpose images by a third of a stop.

Conclusion
I tried really hard to like the GF3. After all, it is one of the only mirrorless cameras that can actually fit into a large pocket! It has certain notable improvements over the GF1 and GF2, namely, faster processing, a quicker frame rate and a much more refined JPEG engine. However, does it do enough to outrank the new PEN cameras, which are the GF3’s direct competition?
In certain aspects, the GF3 does things right. The image quality is quite good and the autofocus performance extremely reliable. Using the camera was quite a fun-filled experience, though I did get a few questioning eyebrows when my friends saw that I was using a pink camera. It cuts down on a lot of features and functionality, but that is basically to keep the size and price down. Abroad, the camera costs USD 599.99 (approx. Rs. 27,000) with the 14–42mm lens, which sounds like a decent proposition.
But that was when I received a shocker. In India, the pricing of this camera is estimated to be around Rs. 44,000 (with the 14–42mm lens)! For that price, one can easily buy a mid-level DSLR like the Nikon D5100 or Canon EOS 600D. Also, the competition’s top-of-the-line PEN E-P3 costs around the same price! Considering that this is a camera that lacks several features, it certainly does not do enough to warrant such an astronomical price.
The Panasonic GF3 is not a bad camera. In fact, it would have been a good buy with a pancake lens, had it not been for the company’s illogical pricing decision. It is a pity, really. 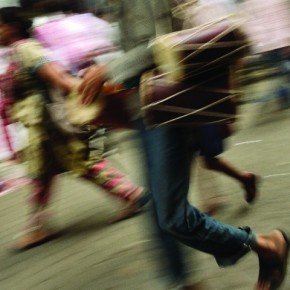 The autofocus performance of the Panasonic LUMIX DMC-GF3 is quite fast and reliable. The camera rarely hunts for focus, and was successful in tracking the motvement in this spur-of-the-moment photograph. Photograph/Raj Lalwani 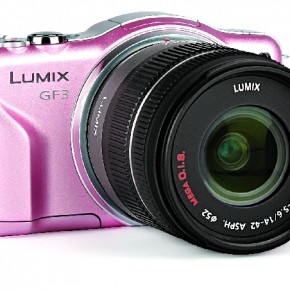 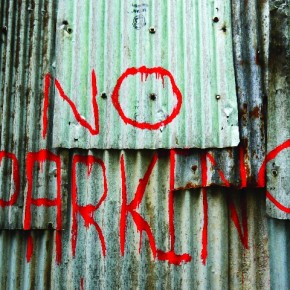 expressive Creative Control Filter It is disappointing to see that most of the Creative Control fi lters look insipid and unexciting. As compared to the competition, there is no fi lter dedicated to a B&W look! The Expressive fi lter produces an impactful, overprocessed look. Photograph/Raj Lalwani