Pentax K-500: For the Traditionalist

Want to get your money’s worth out of your camera without a care for all the frills? Ambarin Afsar tells you how the Pentax K-500 can do just that.

Currently, two manufacturers dominate the entry-level DSLR market—Nikon and Canon. But Pentax’s last few releases have been giving them a good run for their money. Also, the rise of mirrorless interchangeable lens cameras have been giving the entry-level DSLR category quite a tough time. As Pentax tries to change the game with the release of the K-500, we find out where it succeeds by a wide margin, and where it misses out to its competition.

Features
The K-500 is one of a new pair of twin DSLRs from Pentax, the other of which is the higher end K50. It offers the same 16.3MP CMOS sensor and AF system as its more expensive sibling. Not just this, it also offers an actual glass pentaprism viewfinder with a 100% field of view—a feature that is a first of its kind in this category, and at this price level.

The other features of the K-500 include a whopping ISO range of 100–51,200, Full HD 1080 30p video, 6fps burst shooting, a 11-point AF system and a range of inbuilt filter effects. The camera also boasts of a maximum shutterspeed of 1/6000sec and a 3-inch LCD with 920k dots. While at its price point, it may be a little too much to ask for a tilt-and-swivel LCD, but it is on my wishlist for Pentax’s next upgrade.

The lens shows some really bad flaring against the light in this situation. However, in most other situations, it is quite sharp with few noticeable aberrations. Exposure: 1/160sec at f/7.1 (ISO 100). Photograph/Ambarin Afsar

The camera also features sensor-shift type shake reduction, Eye-fi support and 19 scene modes. Judging by the list of features, it goes to show that although the K-500 might be the first rung of Pentax’s DSLR range, the company cannot be accused of skimping on important, useful features.

In fact, if you so much as glance at the autofocus modes, you will notice a plethora of options. Manual, Single AF and AF-C are the usual staple modes along with a fully automatic mode that overrides the physical switch for switching between those three modes. There are face tracking and motion tracking modes, and then there is also focus peaking in Live View. There is an option to zoom into the focus point to further finetune focus. If you have a compatible lens, then there is another mode that waits for your subject to stroll into the focus point before the shutter is released.

Handling
On the other hand, as soon as you shoot through the optical viewfinder, you realise that there is zero indication about which one of the 11 AF points are being used. You are left to rely on your own memory, and the naked eye, or pure intuition, in order to determine if the desired areas of the frame are in focus. This is a major drawback, and something that is not lacking in the K-50. Why, then, should Pentax have removed it from the K-500, is a complete mystery.

The K-500’s design and button layout are excellent with dual dial controls for setting shutterspeed and aperture values independently. There are buttons dedicated to exposure compensation, and AF/AE locks—all of which are highly unusual on a camera in this price bracket. Despite the wide variety of controls, the layout does not feel cramped. In fact, a deeply recessed handgrip makes the K-500 very comfortable to hold in one hand.

The K-500 also has a few unusual shooting modes that you will not see on any other camera, apart from old Pentax models. These are the Sensitivity-Priority (SV) and the Shutter & Aperture-Priority modes (TAV). 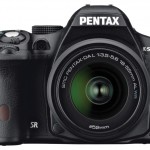 The camera looks quite rugged and feels nicely solid even though it isn’t weathersealed. Additionally, the front of the camera features the RAW/FX button, which instantly toggles between image formats. 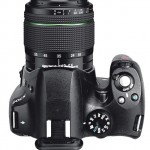 The top portion is loaded with dials, much like a midlevel DSLR such as the Nikon D90, which I have been accustomed to using. The top also houses the green button that can toggle between modes.

The 3-inch fixed LCD screen is the only thing that makes us wish for a tilt-and-swivel LCD or even touchscreen features. These would have made the camera more user-friendly to the absolute beginner.

Also included is a rather innocuous looking button with a small green dot that is unique to Pentax DSLRs. It has two uses—firstly, when shooting in the Manual mode, a single push of the green button allows you to instantly set the correct exposure for the subject, as calculated by the camera (useful if you need a starting point for your own exposure). Secondly, the K-500 offers a Hyper Program function which instantly switches to either the Shutter-Priority or Aperture- Priority mode from the Program mode, simply by turning either of the control dials on the grip. Pressing the Green button then returns you to the Program mode. Having said that, the reason why I called this camera a traditionalist’s camera is because despite all the controls and customisability, this camera does takes some time to master. And it will only open its secrets to someone who is dedicated to understand his photographic equipment, and someone who is not afraid of exploration.

Performance
The image quality is admirable for a budget DSLR such as this. There is no shortage of detail in the 16MP images and I got sharp images throughout without any focus errors. However, since the lens does not feature stabilisation, it has to rely on the body for shake reduction, and this makes the entire process a very noisy affair. The colours are nice and neutral, and if you want them to be punchy, you can simply boost saturation a bit. Skin tones are preserved nicely, and there was just one occasion when the lens flared badly. White Balance and metering are accurate and while the camera tends to underexpose slightly on certain occasions, it copes well on the whole.

In-camera RAW and JPEG processing are amazing, and you have a variety of controls at hand to tinker with practically any setting.

The little green button ensures that you do not miscalculate exposures at any point, even if you are taken unawares by the situation. Photograph/Ambarin Afsar

Conclusion
Priced at Rs. 29,995 with an 18–55mm kit lens and at Rs. 38,995 for a twin lens kit that includes the 50–200mm, this camera is easily the best entry-level deal available in the market. If you can forgo things like the lack of autofocus during video and no mic input, or no AF point indication in the viewfinder, then it is an excellent camera that will help you push your photographic boundaries.

Ultimately, the Pentax K-500 is an entry level model punching way above its weight. It is very well made, is a great performer and produces superb results. Add to that Pentax’s hereditary compatibility with legacy lenses, and you have a clear winner on your hands. The question is, do you want frills? Or can you condition yourself to shoot the spartan way—simply and without additives.

I opened up the RAW version of this image in Photoshop and just a few tweaks later I had emphasised the patch of sunlight falling on the bucket. Photograph/Ambarin Afsar

Build Quality
Sturdy, but not weathersealed
17/20

Who Should Buy It?
Beginners or hobbyists who are willing to dedicate time to exploring the camera fully.

Why?
This camera will help you grow, and it will help you learn, but only if you don’t allow yourself to be intimidated by the host of controls it provides. 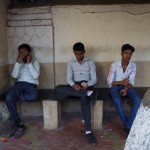