The Panasonic GH3 sets the standard for what a hybrid camera that shoots both stills and videos should be. Shridhar Kunte sees if it is worth its price.

Panasonic’s flagship mirrorless cameras have always been great hybrids. Both the GH1 and GH2 were universally accepted as competent still cameras with excellent video functionality. The GH3 is now here, and with this new camera, the company has taken giant strides to give a pro-like feel to their flagship.

That was the first thing I noticed when I removed the camera from its box. With a larger-than-usual body, this is a camera that can match even a high-end DSLR in terms of its build.

Features
Before we elaborate more on its pro aspirations, let’s quickly see what kind of new features this update sees. If you were hoping for an upgrade in terms of megapixels, you will be disappointed. Just like the GH2, the LUMIX GH3 also has a 16MP sensor. However, the company says that though the resolution is the same, the sensor has been modified to provide a wider dynamic range and a 1EV gain at the high end of the ISO sensitivity scale.

The default aspect ratio is 4:3, and the camera crops pixels to get 3:2 and 16:9. While this is similar to the working of most other cameras, the GH2 had something called a multi-aspect sensor, one that gives full 16MP images in all aspect ratios. The GH3, unfortunately, loses this.

But from here on, it is mostly positive. The camera boasts of a new Venus Engine VII FHD, which not only speeds up startup and shot-to-shot time, but also enables extremely high bit rates while shooting video.

The camera has an impressive burst speed of 20fps in the Super High speed mode, making it the fastest Micro Four Thirds camera in the market for JPEG shooting. That’s right, this high frame rate is not available while shooting RAW, which only allows 6fps.

The camera gains dedicated modes for HDR, Interval Shooting and Multiple Exposures. The camera is equipped with WiFi, and has a dedicated app on iOS and Android. TheGUI of this app is very simple to use and concise.

With the help of this, you can not only transfer your images wirelessly, but also control the camera remotely. You can make the smartphone into an off-camera viewfinder. What was great to see was that you can even control the lens if the camera is fitted with a power zoom.

Professionals will be happy to see that the GH3 has a PC Sync socket. It also has several other jacks, including a 3.5mm mic input, a headphone jack and compatibility with an optional battery grip.

It is the video features in which the camera takes a big leap. Its predecessor, the GH2, had a hack that was not official, but became really popular, as it allowed the camera to record video at much higher bit rates than the competition. The GH3 has an option of recording video at 72Mbps straight out of the box.

This is a big deal, considering that several broadcast corporations worldwide, including the BBC, consider a camera good enough for broadcast use only if the data rate is higher than 50MBps. The GH3 becomes the only camera of its kind to record such high bit-rate video, and that is bound to make it a favourite of professional cinematographers.

Like the GH2, the camera has an Extra Tele Converter mode, which shoots video at a 2.6x crop, but without downsampling any pixels. This basically implies far superior quality. Uncompressed video through HDMI, slow motion capabilities and professional camcorder features such as Time Code round up the GH3’s exhaustive video expertise.

The GH3 has one of the best micro Four thirds sensors to date, capturing excellent quality even in low light. Exposure: 1/20sec at f/2.8 (ISO 3200). Photograph/Shridhar Kunte

Handling
We tested this camera with the Panasonic’s new high-end 12–35mm f/2.8 lens. TheGH3 is undoubtedly the heaviest camera in the mirrorless camera segment. In fact, the body design is very close to the entry-level APS-C size DSLR. The overall body weight is 470g which is close to Nikon D5200.

The use of magnesium alloy frame and weather sealing gives a clear signal that this is a pro tool. In a day and age where every mirrorless manufacturer is trying to make their camera smaller, I think Panasonic has done a good thing by not conforming. The GH3 is much easier to handle for those with average to large-sized hands. For those who are looking for smaller cameras, there are several options like the GF5, G5 and the OM-D. 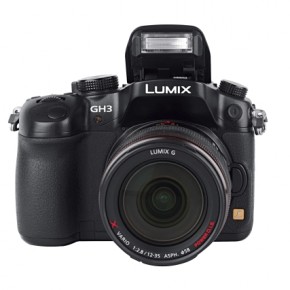 The handgrip of the camera is considerably larger than that of its predecessor, the GH2. A majority portion of the body is covered with textured rubber. A PC Sync socket can be seen at the front.

The camera looks just like any entry-level DSLR. On the top, there are four buttons, one of which can be customised. There are two microphones placed around the hot shoe. 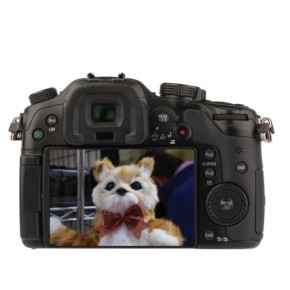 All over the body you will find as many as five customisable buttons. Due to this and the extremely effective touchscreen and Quick Menu, one rarely needs to go into the menus.

The screen is not flushed with the body, which results in your thumb touching the corner of the screen each time you press the video-record button, but this is not a major problem.

The touchscreen implementation is quite good. If you tap the screen in the Playback mode, the camera jumps to a 100% view. The viewfinder and tilt-swivel screen have been upgraded to OLED. The Electronic Viewfinder is better than other MFT cameras, but not as good as Sony’s EVFs.

Performance
The focusing on GH3 is real quick and accurate. This holds good even when the light levels falls. For JPEG shooters, the images straight out of the camera show good colour balance and excellent contrast. Sharpness levels are low, but that is not too bad a thing. It simply means that one can sharpen in post, without artefacts appearing.

The quality of RAW photographs is even better. Dynamic range at base ISO is excellent. Images captured under tungsten lighting showed a warm cast. I was very impressed with the video quality of GH3. The high bit rates and the ETC mode, ensure that the quality of the footage is really good, even while shooting in really low light. The AF works very well during video, and the footage is tack sharp, with brilliant colours.

In fact, we would say that the GH3 has better video capabilities than any hybrid camera in the market… the only reason why a full frame DSLR may be more enticing for some, is if they want far shallower depth-of-field (though the GH3 with an f/1.8 lens does provide a lot of bokeh).

Conclusion
For still photographers, the GH3 is very good—it is fast, handles better than any Micro Four Thirds camera, and produces excellent images. But it is too expensive. The body costs Rs. 99,990… if video is not your prime concern, you will get far better cameras at much lower price tags. Cinematographers ought to seriously consider this though. There are very few options available in the market that will even come close to the video performance of the GH3. With the extensive amount of control and the fantastic data rates, it is a filmmaker’s delight. Colours are pleasing and reasonably accurate. The amount of detail captured by the GH3 sensor with the 12–35mm lens is excellent. Photograph/Shridhar Kunte

Ergonomics
As many as 5 customisable buttons
16/20

Who Should Buy It?
Filmmakers who do not want to compromise anything in terms of video functionality.

Why?
While being a competent camera for stills, the GH3 is the best video interchangeable-lens camera, in terms of features, data rates and on-field performance.