It is an interchangeable-lens camera, but is as almost as small as a basic compact. Neha Mutreja puts the Panasonic LUMIX DMC-GF5 to test.

When I started testing the Panasonic GF5, several questions were going on in my mind. What is the relevance of a mirrorless camera versus a DSLR? Is compact size most important or would one rather prefer a lot of external control? Is it ideal for a compact camera user looking for an upgrade or a DSLR owner who wants a second body? The GF5 is an update of the rather uninspiring GF3. Let us see how it fares in this crowded market. Features
Yet another addition to the G line of Panasonic cameras, the GF5’s body looks similar to its predecessor. Thankfully, the company is finally bundling this camera with the power zoom lens in India, as well. The 14–42mm OIS power zoom lens is far smaller than the manual zoom lens that was sold with the GF3, and it really makes sense to use this particular combination.

On the inside, the GF5 incorporates a 12.1MP Micro Four Thirds sensor. On paper, this might similar to the GF3, but the company says that they have updated it with improved circuitry that allows the photo sites to gain more light. This is complemented by an improved JPEG engine and a noise reduction system that retains better detail by treating shadows and highlights differently.

This is a camera that has been targetted at casual users, for whom the presets make a lot of sense. There are 20 Scene modes and an iAuto mode, which is ideal for those who do not want to bother with settings too much. Besides this, the number of Creative Control filters has been increased from five in GF3 to fourteen in the GF5! Some of the new filters include Soft Focus, Dynamic Monochrome, Cross Process and so on. One can also use these filters while shooting video.

Video has been updated to a certain degree too. The GF3 could shoot video only in the AVCHD format, which gives very good quality, but is not as convenient. The GF5 allows you to shoot both AVCHD as well as MPEG-4 formats, an option that most basic users would welcome. The camera also has a stereo microphone, unlike the GF3 that only had mono sound recording. The Full HD video quality is good, but only 1080i (and not 1080p).

The camera does not have a built-in viewfinder unlike competing cameras, does not even have an accessory port that would allow you to attach an external viewfinder. It also lacks a hot shoe, something that is present in almost every interchangeable-lens camera in the market. Would it matter to the camera’s target audience? Maybe not, but you would rather have the option than have none at all.

Handling
In today’s day and age where almost every camera has an exhaustive feature set and performs decently, the one important criterion that makes them different from each other is the handling experience. While testing the GF5, I was especially wanting to see how easy it is to use, for different kinds of photographers.

The GF5 features a simplistic design, with an effort to keep minimum buttons on the body. However, in order to keep it compact, the company has compromised a little. There is no mode dial. You need to change modes by accessing the menu system. Though this is easy to use, there is a lag while switching between modes, which was quite irritating. This was most problematic when I wished to switch modes during shoots.

The camera features a 3-inch touchscreen LCD screen, where some additional functions can be found, for instance, a Fn2 soft button, in addition to the physical Fn button that is already there. I enjoyed the functionality quite a bit. The LCD is so responsive, that when I wished to focus on a certain area, I simply had to touch the screen and it would select the area instantly. The increased resolution of the LCD (now 920k dots) means that the screen is as good as the best in its class.

Despite its small size, the camera feels quite sturdy. It has a texturised pad on the front right side, which acts as the handgrip and is supported by the rubberised thumbrest on the rear. 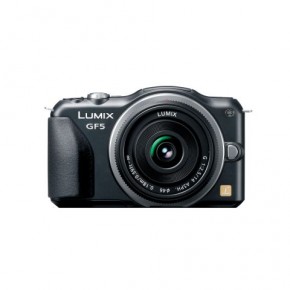 Due to the size of this camera, there are barely any controls placed on the front panel. The left corner has the textured pad that provides easy grip even though it is so small. For better stability and grip, shoot holding the camera with both your hands. 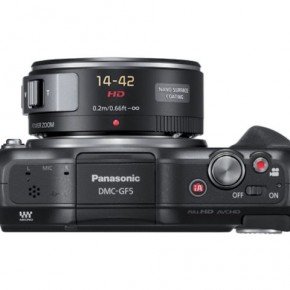 The top panel houses the On/Off switch, with dedicated buttons for iA and movie recording. Where one would find the hot shoe, the company has placed only a pop-up flash, which can be disappointing for serious enthusiasts. 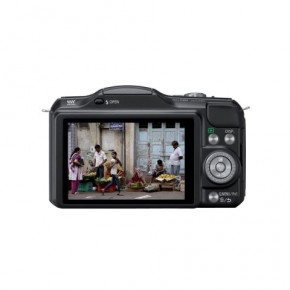 As usual, the camera has most of its buttons on the back panel. But this does not mean that it is filled with controls, as some of the functions are also embedded in the touchscreen menu. There are no dials for quick access to settings or modes.

Performance
The camera is so tiny that everyone assumes that you are a casual user, and do not mind even if you continue shooting. I had a lot of fun with this tiny camera. It easily found a place in my bag and travelled along to different places.

The camera’s AF system is quick, but I did not find a phenomenal difference between this one and some other mirrorless cameras we have recently tested.

Though some people might miss the presence of the manual zoom lens, I thoroughly enjoyed the compactness and the ease of use given by the powered zoom lens. Two levers on the lens help you zoom in and out and also fine tune focus.

The  sensor does a good job in controlling noise. Images are better than those produced by the GF3. At ISO 3200, you will notice a little bit of colour shift, but these images are also useable. In addition to this, I noticed that the quality of the out-of-the-box JPEG images has certainly improved, which is great noise for the camera’s target audience.

The camera’s metering system works well in most situations. The dynamic range is quite good, but if you wish to postprocess your images to a large degree, the latent detail within the JPEG files is not so much. It is not so easy to make photographs of kids at play, but the camera’s quick AF helped me make this picture by simply pressing the touchscreen. Photograph/Neha Mutreja

Conclusion
The GF5 has most of the features that one would wish to have in a camera. Along with that, it has an improved sensor and processor, along with a more compact lens that enhances the overall shooting experience.

The only catch is its price. At Rs. 40,990 for the kit, the camera is much more expensive than its closest competitor, the PEN E-PM1. But then, the advantage of the power zoom lens along with the superior noise performance do justify the additional cost.

Another question you may want to ask yourself is what you really expect from the camera. Is this going to be a camera that you expect to control to a large degree? If you are someone who wishes to have quick access to settings via conventional dials and switches, the GF5 is the wrong camera. The slightly more expensive GX1 or cheaper PEN E-P3 are far more worthwhile options.

But if you enjoy the compact camera experience that you are accustomed to, and wish to move up the ladder in terms of sheer image quality, the GF5 is an interesting proposition. It is a little overpriced, sure, but until an equally small and versatile competitor is available in the Indian market, it remains an interesting camera, for a basic audience. The colours rendered by the camera are true to life. The sharpness in the centre of the frame is too good, but it deteriorates around the corners. Photograph/Neha Mutreja