Ambarin Afsar discovers that Panasonic’s latest superzoom offering, the LUMIX DMC-FZ200 beats its competitors by a wide margin. Find out why.

Superzoom cameras have been trying to pack in plenty of zoom for years now, but the Panasonic LUMIX DMC-FZ200 seems to have a different agenda altogether. While it features a 25–600mm zoom range, which is pretty usual for superzoom cameras, it also packs an aperture of f/2.8 across the zoom range. When I found this out, I did a double take. Yes, Panasonic’s latest baby offers an aperture of f/2.8 even at 600mm. Is this what the superzoom category has been missing along?

Features
The superzoom market has seen plenty of experimentation recently. The Fujifilm XS-1 packs in a large 2/3-inch sensor, while Nikon’s COOLPIX P510 offers 1000mm zoom. But, both of them have a relatively low aperture at full zoom.

Panasonic has played its cards in a completely unique way. While the FZ200 uses a standard compact camera sized 1/2.3-inch sensor, it also features an aperture of f/2.8 that stays constant across the zoom range. It is a bold move by Panasonic, and one that could completely change the game.

I cannot think of anything that this camera misses in terms of features. An update of the 12.1MP FZ150, it ups the ante in every possible way. While it maintains the same zoom range, the introduction of a fast aperture itself gives it a wide edge over its predecessor.

The FZ200 retains its predecessor’s RAW shooting capabilities and a 3-inch 460K dot tilt and swivel LCD screen. However, it features a brilliant 1.31 million dot electronic viewfinder that is great to use and is far higher in resolution than that of the FZ150. THe FZ200 offers optical image stabilisation and also retains the FZ150’s 12fps continuous shooting without AF and 5.5fps burst shooting with AF.

Now, coming to the shooting modes which are practically exhaustive, Panasonic has thought of every single thing that can possibly be stuffed into this section. Besides the regular P, S, A, M modes, the camera features an Intelligent Auto mode, two Custom modes, a dedicated movie recording mode, 14 creative filters and 18 scene modes.

What is great is that you can choose your settings in any of the P, S, A, M modes as well as save custom sets in the two Custom modes. Then, you simply need to rotate the dial to access a particular saved setting.

You can shoot in the RAW format in all the modes, except the Intelligent Auto mode, where the camera allows you to only shoot 12.1MP JPEGs and lesser. You can also compensate for exposure across all scene and creative modes, including in the iAuto mode. Additionally, the camera has a hotshoe, shoots 1080p video, features autofocus during video and allows you to shoot super slowmotion video too. The anti-reflective tilt and swivel LCD is very useful, especially while shooting on the street. Exposure: 1/30sec at f/2.8 (ISO 400). Photograph/Ambarin Afsar

Handling
While there is an increase in the size of the FZ200 as compared to the FZ150, it isn’t a marked increase despite the fact that the camera has a constant wide aperture across the zoom.

The FZ200 is very well laid out with a chunky grip and plenty of controls. Like I mentioned earlier, the camera is big on customisation and features as much as three Fn buttons and a quick menu button that also doubles up as the Delete button. Each of the three buttons can be assigned photo styles, aspect ratio, image quality, metering modes, AF styles, grid lines, video recording area, flash, remaining images counter, flash exposure compensation, auto bracketing and the side lever.

Interestingly, the camera’s 24x zoom can be managed using a dedicated zoomrocker located on the top of the camera, as well as a lever, which is situated on the lens barrel itself. This lever is smooth to operate and proves to be very useful for handholding the camera when shooting video or for operating the shutter release button with your right, and zoom with your left. However, if you accidently brush against the lever, you will find the camera zooming into 600mm and no amount of twisting the zoom rocker on the top of the camera, will bring you back to a wide focal length, till you take your hands off the side lever.

Right next to the lever are the AF types. You can choose whether you want to shoot using AF, AF Macro or MF. However, the type of focus is not displayed in the rear screen and so, you need to turn the camera around to double check.

While MF works by limiting focus to the range of 1ft to infinity, AF Macro allows you to get as close as 1cm at the wide end and as close as about roughly 3 feet at the telephoto end. If you are shooting macros, be prepared for the AF to hunt a lot and for focusing to be slower. However, even at 6x optical zoom, it is not possible to focus on a subject within 3 feet of the lens. But this is not unusual for a superzoom. While the macro capabilities of this camera may thrill aficionados, you need to remember that this is not going to be a replacement for a mid-length macro DSLR lens.

Moving on, below the AF mode switch, you can find a dedicated Focus button that allows you to change the focus point when you are in the 1-Area mode.

The camera allows you to view histograms as well as gridlines and its menu system is exhaustive. Not only are the menus easy to navigate, I did not face difficulties like important options being hidden two or three menus down.

My only gripe with the ergonomics of this camera is that it lacks an eye sensor to auto activate the EVF. One needs to constantly press the button dedicated to this function to toggle between the EVF and the LCD. 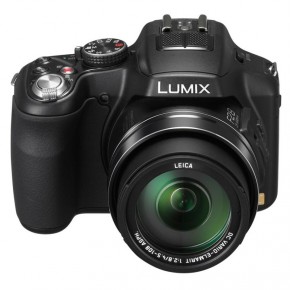 The front of the camera has very little on it, save for an AF Assist Lamp. It has a decently sized hand grip that allows the camera to sit snugly in your hands. Above the lens is a pop up flash with a dedicated switch along side it and a hot shoe for mounting the flashgun. 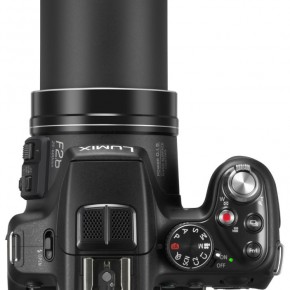 The top of the camera has a firm mode dial, a dedicated video recording button, a burst mode button and one function button. There is a rather large internal mic on top of the camera, which is a big improvement from the rather muffled noises recorded by most cameras. 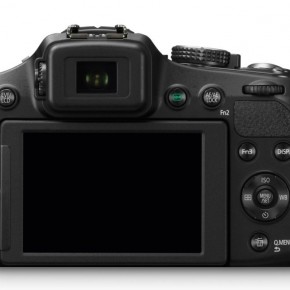 The back of the camera is quite busy with plenty of buttons. It has two function buttons, a thumbwheel that can be pressed as well as rotated and a Q.Menu button that contains a smattering of useful settings like metering, flash modes, WB, aspect ratio and so on.

Performance
The FZ200 performs in a stellar fashion for the most part. The autofocus is actually lightning quick, true to the ‘light speed autofocus’ claims of the manufacturer. While focusing slows down a little towards the extreme telephoto end, this is more or less dependent on the subject. However, continuous autofocus is a bit of a disappointment because it can miss focusing on even slow moving subjects.

The Leica lens used by the camera is optically stabilised and more often than not, I found myself thanking the effective IS. It made handheld shots possible at slower than reciprocal shutterspeeds, especially towards longer focal lengths.

The other thing that really impressed me was the battery life of the camera. Panasonic claims 540 shots and judging by how the camera kept going on and on, I would have to agree with them.

This beauty also shoots RAW, and what I was most eager to find out was, how well the camera performs in this regard. The image quality of the RAW files is great straight out of the camera. There is plenty of shadow and highlight detail, great dynamic range and plenty of image information to play with. While the JPEGs are subjected to some noise reduction and sharpening, they match up to expectations. The lens is very sharp even when wide open and does a great job of picking out fine detail.

While ISO performance drops beyond ISO 1600, you need to remember that the lens gives you an aperture of f/2.8, which means that you or the camera’s auto ISO have greater scope to use lower ISO settings. Such a wide aperture means two whole stops more of light than f/5.6! While it does not change image quality at high ISOs, it certainly means that you will not have use those settings in most cases. The AF latches on to a subject pretty quickly. Add to this the superb sharpness and crisp image quality rendered by the lens even at f/2.8, and you are a convert. Photograph/Ambarin Afsar

Conclusion
At a price of Rs. 34,990, this camera is practically unbeatable. Considering the f/2.8 ace up its sleeve, the FZ200 is bound to beat any other superzoom competitor out there, including larger sensor versions. It is not going to outperform a large sensor interchangeable lens camera, but those may not have a lens to match. And that, really is where the FZ200’s catch lies. While the LCD could have been better and while continuous focus is a little sluggish, the FZ200’s performance is well worth your money. 600mm at f/2.8 paired with optical image stabilisation? Go right ahead and buy it. While the lens is supposed to have nano surface coating to minimise aberrations, there is a considerable amount of flare. This was shot with the lens wide open. Photograph/Ambarin Afsar

Who Should Buy It?
Absolutely anyone who wants to shoot extensively in low light across the focal range.

Why?
For this price, it is practically impossible to get f/2.8 at 600mm in any system, be it mirrorless, APS-C or full frame. Besides, you won’t need to use high ISOs that often. 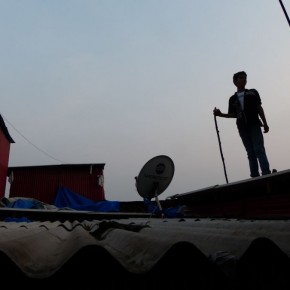 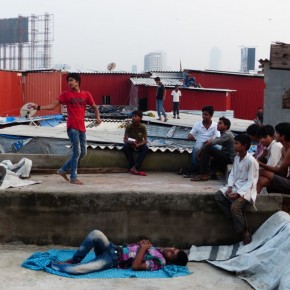 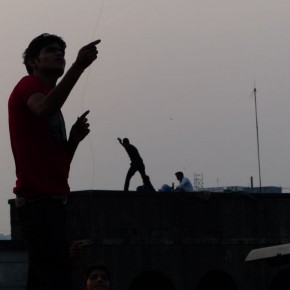 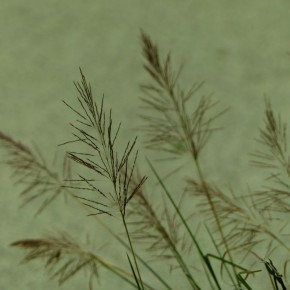 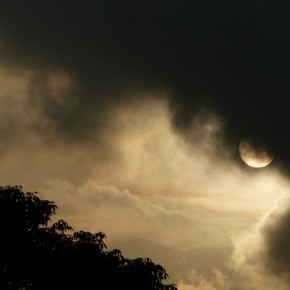 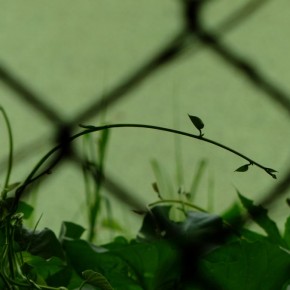 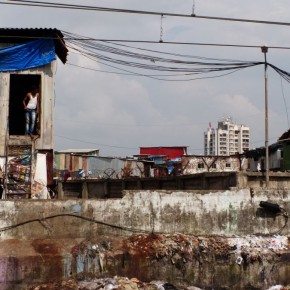 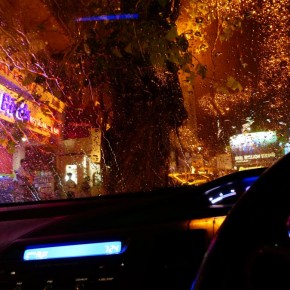