There is a lot to like about the diminutive Olympus OM-D E-M10 at first glance. K Madhavan Pillai discovers a little giant sleeping under the hood.

Third in the line-up of the OM-D series after the E-M1 and E-M5, the E-M10 is a smaller mid-segment mirrorless camera. While it inherits many (but not all) of the excellent features from its more advanced siblings, it certainly holds its own by adding to them.

Features
It uses the same 16MP sensor as the E-M5, and the latest TruePic VII image processor and built-in Wi-Fi connectivity from the E-M1. It features the wonderfully effective twin control dials, a built-in flash, focus peaking, and a blazing continuous shooting speed of 8fps with the focus locked on the first frame, or 3.5 fps while continually focusing on the subject.

In fact, the E-M10 is quite alike the E-M5 in features, except for the weatherproofing, the proven 5-axis sensor based image stabilisation (relying instead on a 3-axis IS), and a maximum shutterspeed of 1/4000sec instead of the 1/8000sec found in the E-M5. On the lower side, shutterspeeds with the E-M10 can extend upto 60 sec. A feature that I have found quite useful is the Time mode. Unique to the three OM-Ds, it allows the user to select from 1 to 30 min of exposure and release the shutter with a delay.

The 1.04MP dot tilting touchscreen OLED display is visibly improved. A built-in eye sensor optionally switches between the 1.44MP dot EVF and the OLED screen. The EVF has a relatively large magnification, presenting the user with a larger view than those seen with the OVFs of most entry and mid-level DSLRs. The contrast-detect AF system uses 81 selectable AF points, and enables focus down to -2EV.

There are, of course, the immensely enjoyable 11 Art Filters, Highlight and Shadow Control curves, the ‘Colour Creator’ feature from the E-M1, in-camera HDR, the rather unique Live Composite mode that assembles a number of long exposure images into one composite image, while showing progress in real time.

In fact, there are so many fun and serious creative options, both for shooting and for in-camera processing, that it takes a while to try them all. Handling
What makes the E-M10 truly fun to use is that you can customise the camera and use the buttons, touchscreen, and dials to access and control quite a large number of these creative options. Initially, I found the buttons and dials a bit too close to each other. The complex, layered menu and controls may seem daunting to a new user. Yet, I am glad that Olympus did not try to ‘over-simplify’ their system.

Low Light Focusing and Tracking- The stage lighting for this dance performance was rather dim. The AF of the E-M10 is fast and accurate, even in low light, as long as there is some contrast in the frame. Photographs/ K Madhavan Pillai 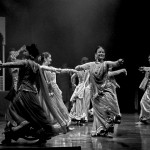 Real World Noise and Detailing in Low Light- At ISO 3200, images show some grain. Most of the details are retained till this point. Underexposing your shots while using a high ISO is not a good idea. Photographs/ K Madhavan Pillai

I cannot overstate how useful the twin mode dials are. Depending on which exposure mode I was using, I was always in control of shutterspeed, aperture, compensation, and ISO, through these dials. The ‘Live Super Control Panel’ on the touchscreen provides access to 21 functions. Changing settings is as simple as pressing the OK button, touching the function you want to change on the touchscreen, and then spinning the front dial. 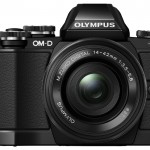 Despite being small, the E-M10 feels good in the hands, owing to the contoured grips and the reassuringly solid magnesium alloy build. The new 14-42mm f/3.5-5.6 EZ kit lens is the world’s most compact pancake zoom lens. 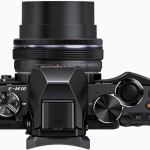 The ability to change settings using the twin control dials, without pressing any buttons, is invaluable in a mirrorless camera. One of the buttons can be customised to temporarily change control dial functions to ISO and WB.

The tilting LCD touchscreen is an improvement over the E-M5 in both visibility in sunlight, and in resolution. Yet, I rarely found myself using it while shooting, after I customised the controls to my liking, preferring the EVF.

Performance
The E-M10 is certainly speedy. AF with E-M10 is exemplary. It locks instantly and rarely misses, even in lower levels of light. The buffer is reasonably good and allows about 11 RAW and JPEGs to be stored before the E-M10 will need to write to the card, which it does quickly. Metering too is spot on, as is the white balance.

While the JPEG processing is excellent, the RAWs have plenty of latent detail which can be recovered. The TruePic VII engine really shows its advantages with the JPEGs. For example, it corrects for chromatic aberrations like fringing.

The E-M10 does quite well with high ISO noise, but lags behind in comparison to the larger APS-C sensors. The best results are seen from ISO 100 to 1600.

I was also not too happy about the flash, especially in the auto mode. The results were overly harsh. I found myself constantly trying to control it for good results, and was never completely satisfied with what I got.

The M.Zuiko Digital ED 14–42mm f/3.5-5.6 EZ powerzoom lens that comes with the E-M1 as a kit, is amazingly compact, and looks good with the E-M10. The powerzoom is a bit too slow for still photography but good for video, for which the lens is compatible. While distortions are visible at the tele and wide ends, they are controlled. This is not the sharpest standard zoom kit lens I have tested, though. It produces its best results between f/5.6 and f/8.

Conclusion
In the US, the Olympus OM-D E-M10 kit costs about USD 800. Even if it is priced equitably in India, it still faces some stiff competition from other mirrorless cameras (Sony, Panasonic), as well as APS-C DSLRs. The reasons to buy the E-M10 come from its sheer range of creative options (especially for JPEG users), handling prowess, and for those who want to build a Micro Four Thirds lens system. In that case, the OM-D E-M10 is certainly an excellent camera to buy. But, if these are not your primary motives, you should consider your options.