Nikon D5: In a League of Its Own The Nikon D5 is a very different low light beast from its predecessors, discovers K Madhavan Pillai, as he puts the new flagship to the test.

When I got an invitation to photograph an automobile rally deep in the Thar, it struck me as the perfect test for Nikon’s new flagship, the D5. It needed to withstand a blazing 44° C in the sun, and get the perfect frames. As I felt the desert dust grind between my teeth, the D5 would need all the weather sealing it could get to keep shooting. But going by the torture we have put previous Nikon flagships through, I was reasonably sure it wouldn’t let me down. The main command dial of my secondary D750, on the other hand, already had some grit in it.

A look at the features that make the D5 different… a new 20.8MP sensor with the Expeed 5 processing engine allow native ISO values from 100 to 1,02,400, expandable to an unbelievable ISO 3,280,000, with Nikon claiming unprecedented noise control between ISO 3200 and 12,800. The entire range is usable for video.

The AF system has a massive 153 points with a greater horizontal spread (but still not up to the edges). Of these, 99 are cross-type, and 55 are selectable. While this may seem odd, having more selectable focus points reduces operational speed for the user, and 55 is plenty to go around. Another advantage is that 15 of the central points work at f/8. The point at the dead centre can now enable AF down to -4EV (practically in moonlight), while the others go to -3EV.

A new metering sensor has 180k pixels to improve color accuracy. Data from the color metering module works in tandem with the AF system to identify and track subjects too, while making metering more intelligent and responsive. The camera can shoot up to a tremendous 12fps with AF, and 14fps with mirror lockup and AF locked. The D5 finally has 4k video, albeit with a 1.5x crop on the sensor, and a restrictive maximum duration of 3 minutes, probably to avoid inconsistencies because of sensor heat.

The crop means that there’s no downsampling and quality is maintained, but wide angle shooting will necessitate using ultrawides. Nikon’s G type lineup is also not video optimised. The built-in time-lapse function records in 4k too. Uncompressed video is still available on the HDMI port, along with all the other video features of the D4S. Yet, with the other 4k offerings in the market, I don’t see the D5 being an attractive enough proposition for dedicated filmmakers.

The 3.2-inch LCD now sports 2.36 million dots and is also a touchscreen, with touch features enabled only for playback. Interestingly, the D5 is available in either dual XQD card or dual CF card options. A 200-shot buffer for 14-bit uncompressed RAW plus highest quality JPEG is very impressive, but requires the use of the highest speed XQD cards available.

If you want to use all the fantastic speed optimisations, XQD is the way to go. While it does not look like it at fi rst glance, there are many other new or improved features that makes the D5 a signifi cantly different camera for an advanced user. Once the D5 acquires the subject, it does an excellent job of maintaining focus at 12fps, with hardly any frames dropped, despite the cluttered background. I tested this with various subjects moving parallel and away from the lens, including birds in flight. exposure: 1/8000sec at f/5.6 (ISO Auto-ISO 900). Photograph/K Madhavan Pillai I never thought I would be using aperture and shutterspeed settings that I normally reserve for daylight, at night. this is a JPEG straight out of the camera, with high ISO noise reduction set to Low. exposure: 1/50sec at f/8 (ISO 51,200). Photograph/K Madhavan Pillai Retrievable details, especially from highlights, are excellent up to this iSo level. as expected, deep shadows start throwing up noise if they are opened up too much. exposure: 1/60sec at f/8 (ISO 25,600). Photograph/K Madhavan Pillai

Good handling always contributes to performance, and often, subtle changes make the biggest difference. Just as with previous flagships, I liked the weight distribution, shape, build and how comfortable it is for my hands to hold and shoot with the D5, in different ways. Of particular note is a new set of customisations for controls, and additional programmable function buttons, that makes a huge difference in handling the D5. I’m not getting into detailed explanations and history here, but to cite a couple of examples… you can now instantly move to a different AF modes and back, for even a single shot, by programming this into the joystick center push.

Same with metering and drive modes. In the fi eld, I found this to be a massive advantage, to the point where I was using it almost constantly. The high ISO performance of the D5 is so good that I ended up using Auto ISO quite freely, by setting a maximum limit. Which brings me to a control layout change I did not particularly enjoy, or understand. The shooting mode button is now at the left, and a dedicated ISO button in its stead. The movie record button right below it, which could earlier be customised to behave as an ISO button while shooting stills, can now be used to bring up shooting mode, leading to some fumbling before muscle memory takes over.

Using the ISO button to shift from Auto ISO to manual, and then to move to the desired ISO, also takes some finger gymnastics, even if it is a single handed operation. That said, the D5 is more operationally efficient than the D4S, and significantly so, with some very relevant controls now accessible without having to take your hand from below the lens. Another important handling improvement is the reduced viewfinder blackout. Despite the faster frame rate of 12fps, this makes a whole world of a difference, because you can now very clearly see the action in between frames. The touchscreen is responsive, but meant to be used only in playback. Unfortunately, it is not customisable.

The front of the D5 is almost identical to the D4S in every way, except for the useful inclusion of an additional function button to between the handgrip and the lens. In the hand, the D5 feels at home almost instantly, and it does not take much to get used to the weight and heft.

A rather odd change, from the D4S, is to position the shooting mode button to the left, and have a dedicated ISO button in its stead. There is no inbuilt fl ash in order to maintain structural integrity, but it would have been extremely useful, given the high ISO performance. 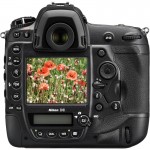 The control layout is quite effi cient and accessible. The 2.36MP touchscreen shows accurate results, but its brightness needs to be reduced a notch from its default setting. It has swipe and pinch functions, and double tap to zoom in and out by 100%. It is not customisable.

Here it is in short… the D5 is absolutely brilliant, with a touch of salt (or a grain of desert sand, in my case). Here’s what everyone wants to hear… ISO performance has never been as good. In fact, our tests revealed almost no visible noise till ISO 3200, and perfectly usable results till ISO 10,000, with no real need for postprocessing. In fact, with some careful noise reduction, images can be used in full size till ISO 51,200, and then you’ll need to reduce the print size to get results all the way up to HI2 (ISO 4,09,600). After this point, the deterioration is rapid, with the much vaunted HI5 (ISO 32,76,800) being practically unusable, making me question its availability, except for breaking a record.

Now here’s the grain of sand. If you want clean results, don’t go mucking around with the exposure, especially up to ISO 800. If the image you have in mind requires underexposure, the D5 will deliver admirably. But if you underexpose and later try to retrieve detail, even by a stop and a half, there is considerable noise, especially at ISO 800 and below. While the dynamic range is excellent, the latitude to push or pull for more detail is not. Oddly enough, at higher ISOs, up to 10,000, this ceases to be an issue. At low ISO, the D5 is much less forgiving than the D4S. On the shooting front, AF tracking, especially the 3D Tracking, is simply fantastic.

Never before have I had this level of freedom, or confidence. Dropped frames were rare. Once you acquire the subject, the D5 sticks with it, even at 12fps. Tracking is also customisable on two fronts… for erratic or steady movement, and for quick or delayed refocusing on a new subject, if the original subject happens to leave the frame or get obstructed from view. In terms of buffer and writing data, the D5 is terrific! With Sony’s 128GB Class G XQD card, it is able to continuously fire off 86 14-bit lossless RAW + JPEG at its best quality, at 12fps, before slowing down. It then takes 3sec to fully empty its buffer into the card. At 6fps, the D5 shows no sign slowing down at all, until the limit of 200 consecutive frames is reached. Nikon is shipping the D5 with this card, and its reader.

The Nikon D5 is primarily a camera meant for still photography more than video, for extreme action and speed, and for use in low light, especially with sports and wildlife. At its MRP of Rs. 4,45,950, the Nikon D5 is yet another worthy flagship from Nikon. Should D4S users upgrade? This depends on whether you really need the AF tracking and other performance enhancements the D5 comes with. In terms of handling and the way it responds to photographic situations, it is a camera with a very different personality from the D4S, in mostly good ways. It comes highly recommended by us.