With frequent updations and largely iterative ambitions, the Nikon D3300 is capable, but a tad uninspiring. Raj Lalwani discusses.

The Nikon D3200 was a landmark camera for the company, having achieved levels of image quality that were never before seen at an entrylevel price point. But that was almost two years ago, and as every month passes and mirrorless technology improves further, the new D3300 gets a tough task to stay relevant.

Features
Maybe the biggest hurdle for the D3300 is that it has very little on paper that seems to be different. The frame rate has increased from 4fps to 5fps, the ISO sensitivity range has been widened, there is 1080p60 shooting and finally, there is an Easy Panorama mode. And while all these changes sound nice, they are not features that will convince someone to buy the D3300 over the still-available (and now cheaper) D3200.

There are still a bunch of missing features that we either see in DSLRs or mirrorless cameras around this price point. No tilting touchscreen, in-body IS, weathing sealing, WiFi or GPS. Also, the flash cannot be used in the Commander mode and the viewfinder is a basic pentamirror (unlike the similarly priced Pentax that has a pentaprism one).

Handling
Despite the small size of the camera, the grip is quite good. But while it even ‘feels’ like a large mirrorless camera, the fact that Live View AF remains slow, is disappointing. A compact camera user who is buying his first interchangeablelens camera would still be better served by a mirrorless camera, at least when it comes to the comfort of framing images via the LCD screen. 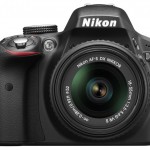 The D3300 is much smaller than the D3200, but it still remains bigger than most mirrorless cameras. If DSLRs need to keep innovating, they may have to reduce the size of the camera even more. 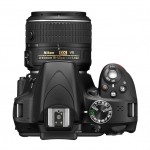 Even from top, the camera is virtually identical to the D3200. You can press the Flash and Exposure Compensation buttons simultaneously and turn the dial to adjust flash power directly. 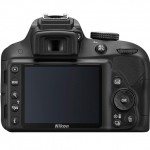 The D3300 handles much like the D3200. So while this is largely a good thing, the handling problems are also shared. There is no dedicated button for ISO and WB, and the lack of a touchscreen is missed.

Performance
In terms of image quality, the D3300 does not throw any major surprises. Up to ISO 800, image detail and resolution is potentially fantastic. I use the word potentially because it is largely dependent on the lens being used, the choice of aperture and one’s shooting technique. 24MP DX sensors are far less forgiving than the 16MP ones and you need to be very critical about your photography, if you really want to get the best out of the camera. Dynamic range is exceptional, especially while shooting in RAW.

This image, shot at ISO 3200 and with Tungsten White Balance shows a good amount of detail in both shadows and highlights and largely luminance noise. Photograph/Raj Lalwani

The new kit lens, while being much smaller, poses its own quirks, mainly because it is not as sharp as the older 18–55mm kit lens. Also, the barrel distortion at the wide end is much more than usual. Thankfully, the D3300 can correct linear distortion in-camera, and it does a rather good job of this.

The other problem with the kit lens is that because it does not do full justice to the sensor capabilities, the decision to remove the AA filter does not show any real world gains.If you choose to buy this camera, strongly consider a prime lens like the AF-S 35mm f/1.8 DX.

The new Expeed 4 processer does make it faster. With the D3200, browsing through the photos during playback would actually cause a slight lag, which was minute but perceptible. The D3300 has no such lag.

Battery life is fantastic, and is easily the most important reason why anyone would still choose a DSLR over entrylevel mirrorless cameras.

While the sensor is excellent and the lack of AA filter can lead to potentially sharper images, the kit lens does not do the camera justice. It is inferior to the older kit lens. Photograph/Raj Lalwani

Conclusion
The D3300 is a mild iteration of a very accomplished entry-level DSLR. So while it is a very good camera on its own, its biggest competitor is the D3200 itself, which is available for Rs. 5000 less.

More importantly, the D5200 body is now priced at Rs. 37,450, that is a mere Rs. 5000 more than the D3300. At that slightly higher price, you get a far better camera with significantly better autofocus and a tilt-swivel LCD screen!

It is ironic, but despite producing a very good camera, Nikon has missed the bull’s eye. The fact that the older generations are now available at better prices makes the Nikon D3300 something that you should avoid until the prices fall.

Build Quality
Made of sturdy polycarbonate
16/20

Who Should Buy It?
Those who want to buy a budget DSLR without an AA filter and have the lenses to take advantage of that.

Why?
If you do not need that slight detail improvement with the AA-filter removed, ignore this and get the D5200.