Raj Lalwani tests the 24.2MP Nikon D3200 to see whether it makes sense to stock so many megapixels in an inexpensive entry-level body.

When I first read about the fact that Nikon has decided to refresh the cheapest DSLR in their lineup with a 24.2MP sensor, I wanted to laugh. There were so many conflicting thoughts that went on in my mind that the only lasting feeling was a sense of extreme amusement. Barely two years ago, the only 35mm DSLR that offered this much of resolution, was three times the size and almost fifteen times its price. Is that how quickly technology races past? Is that how cruel the digital world is, to someone who may have prided themselves on owning a 20+MP camera earlier?

Features
Megapixels have always attracted the common, untrained audience. The irony, of course, is that the D3200’s target group—families who have bought their first DSLR, students and first-time users—does not even ‘need’ the 24.2MP output. They rarely, if ever, make large prints. Also, the need for faster, higher capacity memory cards, hard drive space and better optics goes up.

But then, I realised that it is best to accept that this is the way technology runs past everyone. Six years ago, 6MP was the norm and now, the 20MP (and even 30MP) barrier is currently being broken. One can only wonder at what the future holds.

So besides that packed 24.2MP sensor, what else does the D3200 have? The highlight, I think is its WiFi compatibility that allows you to share photos and also trigger the camera remotely. Other companies (apart from Samsung, whose latest NX cameras have WiFi support) have quite clearly missed a trick.

It shoots at 4fps, a speed that is quite fast, especially considering the massive amount of data that 24.2MP entails. The video upgrade is solid. It can shoot Full HD video at multiple frame rates and there is also a separate microphone socket! Unlike the D3100, the camera has an infrared receiver.

Unfortunately though, one must admit that Nikon has always crippled this series of cameras. The lack of AF motor means that cannot use autofocus with non-AF-S lenses. Just like its predecessor, the D3200 does not have auto bracketing, and only has simplified options in Active D-Lighting.

In fact, if you compare the D3200 to the now crowded market of mirrorless cameras available at the same price point, it suddenly seems less inspiring. The amount of customisability is barely anything and the camera does not have any image processing filters, like Art Filters.

Nikon and Canon DSLRs have consciously stayed away from including filters that are applied (and previewed) at time of capture. This is disappointing, especially considering the point-and-shoot crowd that this camera is bound to attract.

And WiFi is Here… Finally! The implementation is not perfect, but it is at least there. The D3200 is the world’s first DSLR to have WiFi support, through the WU-1a (an inexpensive accessory). Sharing is the future. The reason why cell phones are so popular is the fact that a single click sends the picture to the rest of the world. It is about time that a DSLR had the same functionality. A wishlist for the future includes smoother upload workflows and multiple OS support.

Handling
In terms of handling, the D3200 resembles its predecessors a great deal. So there is no dedicated ISO or WB button, but a Fn button near the lens can be customised to access any of the two functions, besides others. After a poor, low resolution screen in both the D3000 and D3100, one can only welcome the 9,20,000 dot LCD. The default screen brightness is a little too much, and I suggest you to keep it to -1, if you want to judge your exposures on the screen.

I am disappointed that the company has not felt the need to update the ergonomic experience. Mirrorless cameras at this price point let you modify almost every aspect, from the arrangement of the menu system to what the buttons and dials do.

There are some tiny details that could have been a lot better. The camera does not have the innovative Live View/Record switch that the D3100 did. Instead, there are two separate buttons, one to start Live View and the other to start video recording. If you press the Record button without being in Live View, the button does not work! It can’t even be customised to access any other function, which is quite unfortunate.

The info button on top is rather pointless. All it does is switch the display on and off. I wish the company had allowed the user to take things in their hands and assign various controls to these buttons, as a large part of the design is redundant. 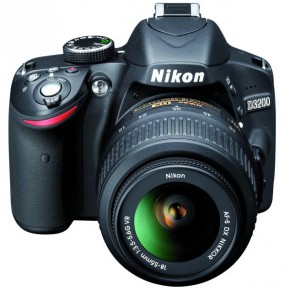 The grip of the camera is quite firm, despite the small size of the body. The camera’s styling is almost identical to the D3100. One difference is that the camera has an infrared receiver, which was missing in the predecessor. 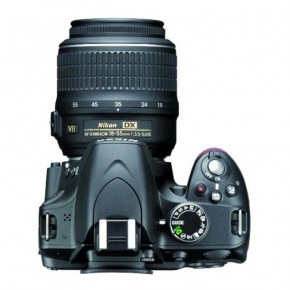 The camera does not have the Live View/Record switch that the D3100 had. Instead, the Record button now stands alone, just around the shutter-release button. I found the placement of this button quite convenient as it would not introduce shake at the beginning of a video. 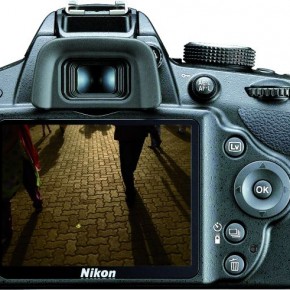 The i button is the soul behind the rest of the functioning. Pressing it gets you into a quick menu that gives you instant access to almost every setting you may need to change on a shot-to-shot basis. The LCD is quite sharp, at 920k dots.

Performance
The AF performance of the camera is decent. In terms of high ISO image performance, the D3200 is not that great. In fact, the 24.2MP output is definitely inferior to that of the D5100.

I have mixed feelings about this. The D5100 (at almost the same price) has better features and ergonomics, and also performs better at high ISO settings. However, another way of looking at it is that the D3200’s high resolution files, when downsized, end up producing the same amount of noise and detail.

Oh, the resolution! I have rarely been a fan of high-megapixel cameras, but one look at the high resolution RAW and JPEG files, and I was hooked. The sheer amount of detail visible, is incredible.

Does someone really need so many megapixels? Well, the fact that the option is there itself, is good. The amount of cropping possibilities that are now possible, can either make you lazy as a photographer, or simply help you salvage a lot of great photo opportunities. How you use it, is up to you.

The dynamic range and latent detail in both RAW and JPEG files is stunning for a camera of its class. The JPEG engine is superbly refined, with absolutely no oversharpening artefacts visible, a problem that has plagued other cameras that have a similar high resolution sensor. The high resolution advantage comes through in the fact that this is a tiny crop from a much larger frame that was captured on the go. Photograph/Raj Lalwani

Conclusion
If fun effects seem attractive to you, then you should look at the mirrorless world. If you want a better low light machine, the D5100 is a better option. But for those who value low ISO performance and do not intend to shoot above ISO 3200 (forgive the ‘3200’ pun!), the Nikon D3200 is the best entry-level DSLR available today. Metering tends to underexpose the image slightly, but that is good as the highlights are always protected. The amount of latent shadow detail in the JPEGs is stunning. Photograph/Raj Lalwani