The Nikon 1 series has seen some standout mirrorless cameras. Does the new Nikon 1 V3 continue its predecessors’ legacy? Supriya Joshi finds out.

How do you follow up an act that has already set a pretty high standard? Either you one up the former, or produce something which is at par with it. That’s the challenge set upon the Nikon 1 V3, the predecessor of the Nikon 1 V2, which was never brought out in India. Feature-packed and compact, the V3 promised to be fun.

Features
Like the V2, the V3 also features a 1-inch CX sensor, but with no low-pass filter. In layman’s terms, this means that the camera should be able to produce more detail and sharpness. The sensor has also been bumped up from 14.2MP in the V2 to 18.4MP. A new Expeed 4A processor allows the camera to shoot 20fps RAW images in full-time continuous AF with subject tracking. Not only that, like the V1, you can also shoot RAW images at a speedy 60fps, with the focus locked on the first frame. The AF speed is blazing fast. You won’t miss a crucial moment because of it. Exposure: 1/320sec at f/5 (ISO 800). Photograph/Supriya Joshi

An important feature that the V3 loses out on is the electronic viewfinder that came to be a standard in the Nikon 1 V series. And it’s quite a significant loss, indeed. In their effort to make a more compact and pocketable camera, Nikon has deprived users of a very important feature. It’s not all hopeless, however. You can shell out an additional sum and buy a separate viewfinder, which sits on the accessory port.

The video features of the V3 include 1080/60p Full HD. There is also the option to capture slow motion videos at 1200fps. The V3 comes with the 10–30mm f/3.5- 5.6 kit lens. However, because of the 2.7x crop factor, it gives a roughly 27–80mm field of view, in 35mm parlance. The other features of the camera include in-built WiFi for image transfer and shooting, several automatic modes and a 3-inch 1037k dots touchscreen LCD screen, which tilts up about 170 degrees and down about 87 degrees.

Handling
The dimensions of the V3 more or less resemble that of a regular compact camera. However, the body is made from magnesium alloy, so you are certainly not dealing with a lightweight.

The new additions to the V3 are the twin command dials, one of which sits next to the lens in front of the camera. This system especially comes in handy while using the Manual mode, as each dial controls the aperture and shutterspeed settings respectively. The mode dial on the back of the camera also acts as an Fn button, if pressed. The handgrip is quite well-built and ergonomic. 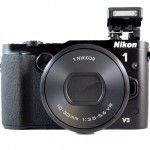 From the front, the V3 looks extremely similar to a compact camera. The magnesium alloy body feels sturdy, yet the camera is quite pocketable. The texturised grip is very helpful as well. 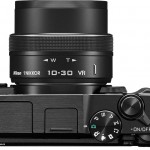 Don’t be fooled by the section of the camera body which looks like a hot shoe. It will only accept proprietary accesories like the optional viewfinder. Speedlights and remote triggers can’t be used. 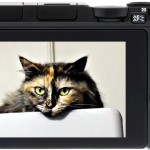 The back features the four way directional pad and scroll wheel to control various settings. There are two Fn buttons which are customisable, and an F button, which brings up a quick menu for key settings.

Another deviancy found in the V3 is that Nikon has switched the storage system from SD cards to microSD cards. This left me confused. For a camera offering such high frame rates, at least a UHS 1 card is required. Strangely, the card provided with the camera was a Class 6 one, which simply was not good enough. I shot several moments at 60fps, and it took forever to finish reading. I could still continue to make images while the card buffered, but if I switched off the camera during this time, it would only switch on after it finished buffering. The tilting screen came in handy while framing low or high angle shots, but I wished it tilted the whole 180 degrees, just to complete the whole selfie experience.

Performance
One of the shooting situations I put the V3 through was to shoot a very important day, my friend’s wedding. Of course, I had the Nikon D610 as my primary camera, but I decided to use the V3 as my backup camera, and I ended up using it quite a bit.

First of all, the V3 is a fast camera, indeed. The AF speed was very quick and the accuracy was almost always on point. There was barely any hunting, even in low light situations. While the camera gives blazing fast 20fps and 60fps burst rates, strangely, you can only record 40 frames in RAW as well as the JPG mode. Ideally, the camera should allow for more frames to be captured in the JPG mode. The battery life was also quite good. The camera lasted the entire duration of continuous shooting during the wedding day, with more than enough to spare. The JPGs off the camera produced good colour and skin tones. During RAW processing, a lot of highlights and shadow recovery was possible. Photograph/Supriya Joshi

Coupled with the FT1 adapter, you can use practically any F mount lens with the V3 for added versatility. The fast AF speed and the 2.7x longer zoom range would, on paper, make the perfect kit for a wildlife photographer. We tested out this theory as well and mounted the Nikkor 70– 300mm f/4.5-5.6 on the V3. Sadly, the theory only looks good on paper. Not providing an in-built EVF is a setback to those who would seriously consider using the V3 exclusively for wildlife photography. It was extremely impractical on field and near impossible to use without a tripod. Even with the EVF and tripod, you would have to be extremely skilled or patient to make this system work for you. Even if you were to invest in the additional EVF, we also found that using the FT1 adapter only allowed you to use center point focusing, further adding to the shooting problems. The tilting LCD screen meant that I did not have to reposition myself. I simply lowered the camera and pointed the screen up to make my frame. Photograph/Supriya Joshi

On the other hand, the image quality provided by the camera is quite good. Straight from the camera, the colours in the JPGs are vibrant. There was a lot of scope of highlight and shadow recovery in the RAW files as well.

The images are quite usable up to ISO 1600, after which the quality steadily drops. If you’re not intending to print them, you can push the ISO to 3200 in low light situations.

Conclusion
The bottomline is, the V3 is a good camera, with the best AF and frame rate of its class. For photographers stepping up from cellphone and compact camera photography, the V3 is a good choice. Professional photographers for whom speed is paramount should also consider this camera as their secondary body. Videographers will also enjoy using the V3 for its good video quality as well as for making unique slow-mo videos. There’s something for everyone! I shot this image via my phone using the Wireless Mobile Utility app. The camera itself looks unassuming, and shooting via the app allowed for more discretion. Photograph/Supriya Joshi