The Nikon 1 AW1 was the latest to join the Nikon 1 lineup. Natasha Desai finds out how well the rugged interchangeable lens camera holds up.

When the Nikon 1 AW1 was announced, it sent ripples of excitement through the industry. The world’s fi rst rugged interchangeable lens camera was set to arrive! For many, the announcement was reminiscent of the NIKONOS range of underwater cameras of the 1960s, which could go down 35metres more than the AW1. So, just how good is the rugged Nikon 1 AW1?

Features
When I first saw the camera, it didn’t look ‘rugged’. It is certainly not pocketable with the 11–27.5mm lens on. But, the AW1 is waterproof upto 15m, shockproof from 2m and freezeproof upto -10°C, the same as the Olympus TG-3. It is based on the Nikon 1 system, which means it has a 14.2MP Nikon CX sensor. In terms of 35mm, you get a range of about 30–74mm with the 11–27.5mm lens attached. It does not extend when you change the focal length, and neither when focusing. There is also an all weather 10mm f/2.8 lens available for this camera.

It is a bit of a push to attach these lenses because of the O-ring around the lens mount. This O-ring is what keeps the water from getting inside. It is possible to use the other Nikon 1 series of lenses with the camera, but this will mean that it will no longer be waterproof and the O-ring will be left exposed. Nikon has added a protective covering for the O-ring that is housed in the body cap of the camera. The pop-up flash is sealed internally and the HDMI ports, battery and memory card compartments are sealed as well. The camera also comes with an altimeter, a depth gauge, an electronic compass and can record GPS data as well. During RAW processing, there was a fair amount of highlights recovery possible. Exposure: 1/1600sec at f/6.3 (ISO 160)
Photograph/Natasha Desai

This camera has an Action Control button, allowing you choose between modes like Motion Snapshot, Best Moment Capture, Auto, Creative and Advanced Movie, just by tilting the camera. With this button, you can adjust the mode when shooting, and toggle the LCD’s display when in the menu. While this is a handy feature to have underwater or when using with gloved hands, you still have to use the buttons to go further in.

For example, the Advanced Movie menu offers a bunch of modes. While I can access it just by pressing the Action Control button and tilting, I have to then use the four way control pad to get to the modes. When viewing images straight out of the box, the colours are vibrant. The LCD too, accurately presents the colours, without any surprises when viewed on screen.
Photograph/Natasha Desai

One interesting mode is the Motion Snapshot, which captures a one second clip of HD video along with a still image. It then puts the two together with a music track while playing the video in slow motion. Here, I wish there were more options for the tracks as the current ones feature piano music that doesn’t really go with sports or underwater scenes.

On the other hand, there is the Best Moment Capture. It shows you a sequence of frames from the scene in front of you, when you half-press the shutter-release button. From this sequence, you can either select one frame by pressing the shutterrelease in Slow View or have the camera automatically save five frames. This comes in handy when shooting action scenes or pets.

Along with the battery and memory card, the AW1 weighs 356g, and becomes heavier once the kit lens is attached. It feels pretty solid when you pick it up which was surprising as I mentioned earlier, it did not look rugged. The camera survived several drops, as well as countless bumps on various surfaces.

The camera looks and feels much like a regular compact. I did miss an EVF when above water at times, but then that would have meant yet one more element to the rugged camera. 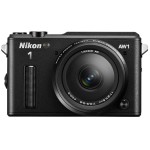 From the front, the AW1 looks much like a compact camera. It also has a textured grip just like some others in the Nikon 1 series. However, with the lens attached, the camera becomes unpocketable. 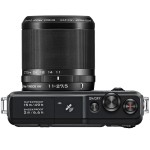 There is no dedicated mode dial on the top. On the other hand, the shutter release and video control buttons are large and easy to grip when underwater. The pop-up flash compartment is unobtrusive. 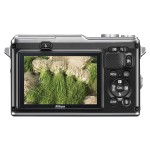 The back features the Action Control button and a four-way directional pad to control various settings. Pressing the display button when shooting will bring up the electronic compass on the screen.

What ticked me off was the way the direct controls have been set. To adjust aperture and the shutterspeed values, you have to press the playback zoom buttons situated above the thumb rest. To toggle between shutterspeed and aperture you have to use the four-way controller which is below the thumb rest. ISO sensitivity was another tiresome affair, requiring one to go all the way inside the Menu to adjust it.

Underwater, the camera performed well. I liked the grip and the zoom ring is big enough to easily change the focal length. Also, managing the controls underwater was easy enough.

After about two and a half hours of continuous shooting, the battery ran out, leaving me quite disappointed, and I managed to make about 140 frames during this time. Another area where it did not do so well was at night. Its low light performance is quite average. However, the pop-up flash does offer both TTL and Manual and can be raised by a button at the rear. The AW1 has a burst mode with 5, 15, 30 and 60fps which is good to capture action. At 30 and 60fps, the focus locks on the first frame.
Photograph/Natasha Desai

As far as image quality goes, the camera does pretty well. You have to remember that the camera is more about ruggedness and durability than image quality. In addition to this, its autofocus is speedy, working well with action scenes that required tracking subjects, without much hunting. The camera has a continuous speed of 60, 30, 15 and 5fps. After 15fps, that is, at 30 and 60fps, you can capture a maximum of 20 frames.

After using the camera for a while, I was left feeling a little conflicted. I liked the camera, it was fun to use, but there is room for improvement, especially where the controls are concerned. It could make for a nice vacation camera and professionals could consider it as a backup all weather option to their kits, but that is if they are willing to overlook a few things.

However, at Rs. 39,950 I would wait. I think this camera has potential and with a few tweaks, its successor could really blow us all away!