Raj Lalwani tests the feature-packed Olympus PEN E-PL3 to see if youshould choose it over other, more advanced options.

Just a few days back, I bought myself an Olympus PEN E-P1. It is an old camera, no doubt, but since it was available at a great bargain price, I thought I could live with the limitations. After all, the new generation of PEN cameras may be better in terms of technology, but are also more expensive.
Moreover, I have always believed that the E-P1/E-P2/E-P3 have far better functionality than the E-PL series. So, it was interesting for me to test the new Olympus PEN E-PL3 and compare the experience of using its new design to other mirrorless cameras in the market.

Features
At first glance, it is a little difficult to believe that this is a PEN camera. In terms of its sheer look and design, it actually borrows a lot from other manufacturers in the market. When it comes to features though, it is very similar to its big brother, the PEN E-P3. Actually, when the company announced the new generation of PEN cameras, they essentially launched the same camera in three different bodies.
All the new-generation PEN cameras are built around an updated 12.3MP sensor that is supposed to give slightly better quality at high ISOs, as compared to previous PENs. They also have the company’s brand new AF system, which at time of launch, was supposed to be the world’s fastest AF system. While the distinction is more of a marketing claim, there is no doubt that the new focusing system is very good.
A Dual-core TruePic IV processor means that this is quite a fast camera. The startup time is very less, shot-to-shot lag minimal and even the application of Art Filters is absolutely instantaneous, as compared to the old PEN cameras that would often freeze for a few seconds. Interestingly, though it is slightly cheaper, the PEN E-PL3 actually has a faster frame rate than the flagship E-P3. The E-P3 can only shoot 3fps, while the E-PL3 has an extremely fast shooting speed of 5.5fps. This frame rate is far superior to other cameras in this price range.

Handling
Usually, when one begins to write about how a camera handles, all one needs to do is recall what the camera felt like, on field in difficult situations. Since I was carrying my own E-P1 with me as well, I could put one camera design against the other to see if the E-PL3 compromises on the ergonomics in any way.
It is a mixed bag. The flagship camera still makes it easier to access various settings, but unlike previous E-PL cameras, the E-PL3 is actually quite nice to use on field. The buttons are rather small and there is only one exposure control wheel, but every single button and dial is customisable in so many ways that you rarely miss the controls of the higher-end cameras.
There are some other major differences in terms of the camera’s usability as well. In terms of its overall look, it actually resembles a Sony NEX camera more than looking like a PEN camera sibling. This is primarily because of the protruding lens mount, LCD design and the clip-on flash that is included with the kit, each of which have the NEX identity.
The LCD of the E-PL3 is not fixed, but unfortunately, it only tilts and does not swivel. This kind of a tilting LCD has limited usage. It is not as flexible as the tilt-swivel design and also does not protect the LCD during storage. Besides, it has a 16:9 aspect ratio. This may be useful while recording video, but when you are using the default 4:3 aspect ratio to shoot stills, it can be quite irritating to see black bars beside your composition.
Additionally, the resolution of the LCD, at 4,60,000 dots seems a little ancient, considering that a lot of new compact cameras have double the resolution.
The build quality of the camera is decent, but not as inspiring as that of the E-P3. The white, polished surface is so smooth that I did not try using the camera without wearing the camera strap.

Performance
Since the E-PL3 has the same insides as the E-P3, the performance is almost identical. Image quality is very good at lower ISO settings, with the superb JPEG engine producing accurate colours, good dynamic range and a look that is vibrant, but not overdone.
At high ISOs, you need to shoot a little carefully. Noise increases really quickly in the shadow areas, but if you expose the photographs properly, then the images look quite good, even at ISO 6400. There is a definite improvement as compared to the previous PEN cameras, but the settings beyond ISO 6400 are practically unusable, which is unfortunate.
Still, it must be said that the Olympus PEN cameras produce better looking photographs straight out of the camera than their immediate competitors. Considering that the PEN system also has in-body stabilisation, it is an added advantage that tips the scales favourably towards them.
The autofocus system is really fast for most subjects, but it still has its share of problems. In low contrast situations, the camera struggles, even if the light levels are good. If it has missed focus, it does take some time to recover and get the subject back in focus. It is still pretty much one of the best focusing systems we have seen in a mirrorless camera, but in a really testing situation, it is no DSLR.
Olympus seems to have tweaked the manner in which the Grainy Film Art Filter works. There are two options—one being the original high contrast one, while the other ones give more detail, almost like Tri-X and T–MAX. However, even the high contrast version seems to look a little different. The amount of grey in the image is slightly more, thus reducing the overall contrast a bit. Some may welcome this, others may not even notice it, but I was personally a little disappointed because I prefer the original, stark, high key look that the Grainy Film Art Filter offered with the earlier PEN cameras.

Conclusions
The PEN E-PL3 has its share of problems, but even at a price of Rs. 34,999, it does manage to pack in a lot of features, decent ergonomics and very good image quality. The pricing seems a bit high, especially because the company has chosen to price the higher-end E-P3 only slightly more.
Whether you buy this or the E-P3, depends on whether you need a tilting LCD or not. But then, there remains little doubt that both these PEN cameras are a part of the best mirrorless system at this price point.

Warranty & Support
Two-year warranty (out of which one is international), six Indian service centres
3/5 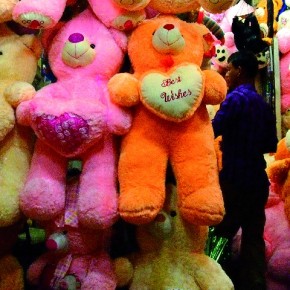 The quality of the 14–42mm lens is superior to most other kit lenses. Images are extremely sharp and the colours are vibrant, straight out of the camera. Photograph/Raj Lalwani 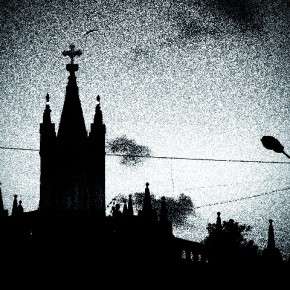 The look of every Art Filter can be fine tuned in a number of ways. For example, here, a vignette was added to the Grainy Film filter. Photograph/Raj Lalwani 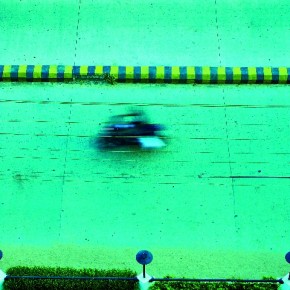 The tilting LCD of the olympus PEn E-PL3 made it easy to shoot this top angle shot, while the camera was held out of the window. Exposure: f/11 at 1/30sec (ISO 200) Photograph/Raj Lalwani