Samsung PL210: A Lesson in Patience All photographers know the value of the perfect image, and how long it takes to capture that one superb shot. While this is a great practice, what should one do if the camera itself is unresponsive? Enter the Samsung PL210, a camera that will certainly teach you a lesson in how to control disappointment levels while shooting.

Features
Announced by Samsung a little before the Consumer Electronics Show at the beginning of this year, the PL210 is a 14.2MP compact camera that packs in 10x optical zoom. While the zoom range certainly sounds attractive, it turns out that the camera lacks in the autofocus department. I used the zoom to its maximum capacity, and I found that it took a lot of time to focus on the subject. When it would actually manage to lock focus, the AF performance was not accurate, and I realised that my intended subject was actually unsharp!
The PL210 has a Dual Image Stabilisation mode, which is not very helpful. Despite increasing the ISO setting, the actual stabilisation proves inadequate and the final images end up being grainy and blurred. This is quite disappointing, considering that the feature does not come of any use while shooting in low light without flash.
The video capabilities of this camera, on the other hand, are very good. The PL210 shoots 720p HD video at 30fps with fulltime AF and the ability to use optical zoom during video capture. The sound recorded is also clear enough, even when played back on the camera itself.
What I enjoyed most with the Samsung PL210 were the Smart Filters—10 unique effects that you can use. I found myself reaching for the Fish-eye 2 mode quite often, which also added a quirky black border around my photographs. Filters like Sketch Effects, Half Tone Dot, Vintage-style and Miniature Lens Effect are not only fun to use, but also ideal for the Facebook friendly audience.

Handling
The design of the camera is rather minimalistic. However, since the Menu and Mode buttons are placed one on top of the other, using them can be a little confusing. It is rather easy to press the Mode button instead of the Menu button, while adjusting settings like ISO and this makes the entire user experience rather trying.
The grip of the camera is good enough. I used the camera in running trains, holding it as if my life depended on it, and it did not slip, even once. Playback speed is good, but navigating between Mode and Menu is not possible unless you press the shutter button. Very annoying, indeed!

Performance
The focusing speed of the PL210 is extremely disappointing. As mentioned before, it takes a good number of tries to get a shot that is in focus. While we do not expect compact cameras to work wonders in low light, the camera consistently missed focus in good light too.
The shutter lag is terrible, whatever mode you may be shooting in. The camera takes a long time to capture the moment, and rather surprisingly, the amount of time I had to wait after the picture was made, was even worse. The flash takes a good six seconds to recharge for the next shot. It does not even allow you to view the photo you have shot till the flash is recharged. Considering that the main target audience of this camera would probably use the Auto mode and shoot pictures indoors with flash, this aberration is a serious one indeed.
The metering of the camera is accurate, but in contrasty light, the highlights get blown out quite easily. The lens also displays quite a bit of lens flare. While shooting in bright sunlight, I also found that the white highlights were blown up. At lower ISO settings, the pictures show a few compression artifacts. At ISO 200 and above, the camera starts exercising aggressive noise reduction, which robs the images of fine detail. Beyond ISO 800, the noise levels are a lot higher than competing compact cameras.

Conclusion
At the end of it all, the camera seems a bit amateurish and not really recommended for those who wish to use it for serious photography. There is only so much one can do with fun filters, and after the initial novelty factor, you will realise the camera is inadequate for a hobbyist.
Moreover, it is not good enough even for regular shooting at home because of its poor AF and slow flash operation. Considering that there are many other cameras available at the same price point with similar features and far better performance, we would advise you to give the Samsung PL210 a miss. 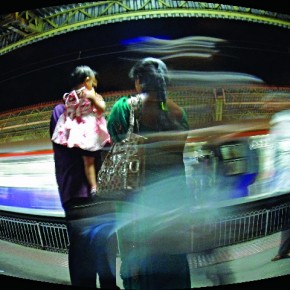 The Dual Image Stabilisation of the PL210 is not very effective, but the Smart Filters are fun to use. Exposure: 1/4sec at f/3.3 (ISO 400) Photograph/Supriya Joshi