The Fujifilm FinePix HS50 EXR may look like a cosmetic upgrade but packs in a lot more. Ketan Kundargi puts it to the test.

The Fujifilm FinePix HS50 EXR is the company’s latest offering in an already populated superzoom segment of advanced compact cameras. I feared that the upgrade would simply come with higher zoom and a few simple improvements like a lot of other cameras in this segment. And although it is difficult to differentiate between the two at the first glance, the company has built on the excellent features of HS30 EXR to offer a camera with equally good performance.

Features
The moment you see the EXR label on the camera, you know that the camera packs Fujifilm’s proprietary EXR technology. It allows the sensor to adjust such that it can be optimised for High Resolution, Wide Dynamic Range or High Sensitivity and Low Noise shooting conditions. In fact, the Fujifilm FinePix HS50EXR takes it a step ahead and has an improved 16MP 1/2 inch EXR CMOS II sensor and a more powerful EXR Processor II.

The camera comes with an image stabilised Fujinon lens that boasts a lens of almost 42x. It covers a 35mm equivalent focal range of 24–1000mm. Almost every other standard bridge camera, especially those with a zoom range of over 40x, is only capable of reaching a maximum wide aperture of f/3.5 at the widest point of the lens. The FinePix HS50 breaks this norm and starts at an impressive f/2.8 at the widest end of the lens. Add to that the mechanical rotation rings on the lens barrel for operation that is akin to a DSLR lens. This makes zooming and manual focusing a breeze.

Effective optical IS, combined with great handling lets you use much lower shutterspeeds than usual. Exposure: 1/4sec at f/4 at 200mm (ISO 125). Photograph/Ketan Kundargi

The biggest improvement over the previous HS30EXR model is the inclusion of Phase-Detection pixels just like a DSLR. The Intelligent Hybrid Autofocus system then chooses between the highspeed Phase Detection AF and the more accurate Contrast Detect AF for the most appropriate autofocus for each situation. Fujifilm claims that focusing time can be as little as 0.05sec making it the world’s fastest autofocus in a compact camera. In addition, shot-to-shot time is as less as 0.5sec while in Continous Shooting mode, the camera is capable of shooting a burst of 11fps at full resolution. All these factors make the Fujifilm FinePix HS50 EXR fast, very fast.

The 3-inch 920k dot LCD monitor on the back of the camera can not only be tilted, but also swivelled now. And if you want to use it like a DSLR, you can simply switch to the impressive 920k-dot electronic viewfinder.

Handling
The look and feel of the HS50 EXR can easily make one mistake it for an entrylevel DSLR. The rubber-covered body, as opposed to the more plastic finish on other cameras makes it a sturdy camera with a better grip. The lens itself has a ridged rubber ring for zoom along with a second smaller ring for manual focus. However, the small size of the focus ring and location behind the zoom ring rather than front of it makes focusing inconvenient.

A traditional mode dial on the top of the camera body can be used to switch between the wide variety of manual and automatic scene modes the camera has. A second dial is used to adjust aperture or shutter speed, depending on the shooting mode you are in. On the back, the camera has a traditional four-way pad that lets you toggle between different options in the Menu. You can also use them as a shortcut to the Macro mode, Flash mode and a Self Timer mode. The fourth directional key is a customisable function button that you can set to access your most used setting.

Interestingly, the camera borrows the excellent AF Mode switch from high-end cameras. With a single flick, you can switch between single AF, continous AF and manual focus. Hidden here is the AF-point button used to switch between the different focusing points the camera has. This makes it difficult to make the change quickly needing you to use both your hands to change a focus point. An easier option is to set the centre point and then recompose to your liking.

While shooting, you can choose between the electronic viewfinder or the display screen to see what you are shooting. The camera has a builtin sensor that activates the EVF the moment you bring it close to your eye. Alternatively, you can manually switch between the two displays with a button. 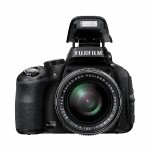 The large rubberised grip on the front makes holding and operating the camera with a single hand very convenient. This leaves your second hand free for handling the lens when using manual focus or to zoom while shooting. 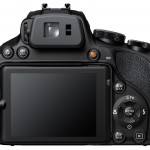 To rest the thumb on the back there is a rubberised thumbrest. It is good to see that though there is a sensor to switch to the EVF, Fujifilm has provided a button to manually toggle between the two. This can be very helpful when shooting from the hip with the tiltable LCD. 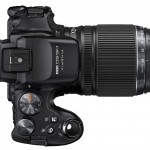 On the top, there is a rather large onboard flash along with a hot shoe for using external flash. Additionaly, Fujifilm has provided two helpful shortcut buttons for Exposure Compensation and Shooting mode next to the standard dials and shutter release button.

Performance
The Fujifilm FinePix HS50 EXR might indeed be the fastest compact camera in the market right now. There is almost zero shutter lag, instant start up and the camera is ready to take the next picture the moment you have shot one. While the company claims that the 11fps burst mode is limited to six frames at a time, one can effectively shoot almost seven-eight frames in RAW+JPEG before it has to stop. If you are shooting in JPEG only, then the camera can go on shooting without a break.

Autofocus is blazing fast at the wide end as promised but slows down considerably at the telephoto end. However, it continues to be impressively accurate throughout the entire focal length range.The optical image stabilisation in the camera helps you make the most out of it by delivering sharp, shake free images even at 1000mm. You can compensate by almost three to four stops below the standard shutterspeed of 1/1000sec with OIS switched on.

Both the predecessors of this camera, the HS30 and the HS20 offered some very interesting features but continued to fail when it came to image quality. Fujifilm seems to have picked up on this as the HS50 offers a considerably better quality though it is still does not come close to being the best. Colour reproduction is excellent, distortion controlled and purple-fringing almost non-existent.

Lightining Fast Autofocus: Phase-detect sensors along with a f/2.8 lens help the lens to focus instantly and accurately even when shooting from a moving vehicle. Photograph/Ketan Kundargi

When viewed directly out of the camera, the files are just a little soft and require a little added sharpness in postprocessing. However, if you are shooting in RAW, you can recover the details easily while developing it. The camera’s Photometry, as Fujifilm calls its metering system is usually spot on. But when faced with large areas of highlights, the camera is tricked into slightly underexposing.

Switch to video and the shortcomings of the camera start showing up. Quality is disappointing with a significant loss in details. And while the autofocus is impressively silent, it can get very difficult to focus or zoom manually.

Conclusion
While the Fujifilm FinePix HS50 EXR might look like just a simple cosmetic upgrade from the outside, it is a completely different story. The EXR II technology makes sure that the camera delivers a performance that compliments the excellent features that the camera has. It is undoubtedly one of the best superzoom bridge cameras currently available in the market.

Why go for the Fujifilm when you can get the Canon SX50 HS with a longer focal range for a few lesser thousands? For the truly ergonomic design, fast and accurate focusing and a high quality EVF. The Canon may deliver slightly better images, but the speed and handling that the Fujifilm offers, makes it an equally strong contender.

Who should buy it?
A serious hobbyist who wants the feel of a DSLR with a wide zoom range.

Why?
It is packed with several features that make for a great photography experience with decent image quality.