Flickr users have seen big changes over the last year with a site revamp and a corresponding app update. Flickr is now treading into the cellphone camera app and photo editing territory, in what seems to be an effort to rival the intensely popular biggies like Instagram and Snapseed. With the new update, Flickr is trying to establish that it is not just a photo uploading website, but a place where you can create images too.

The Basics
The update made the free to download app much slicker with smoother transitions when viewing images. Like the website, you can view your contacts and groups, popular photos and images shot near your location. A search bar here would have been better, because currently one has to go to the options tab and then search. The profile view is organised quite neatly. You can view your sets, groups, favourites, photos of you and contacts. You can also change how you view your photos with a grid and list view toggle.

Capturing with Flickr
When shooting with the Flickr app, a two finger tap shows you the focus and exposure points. You can then move them around to your desired focus and exposure areas. Once decided, a tap on the point locks it. The camera app responsiveness is not as much as the native camera of the iPhone. Another new feature is the live filters. As you shoot, you can see what you frame would look like with a filter on it.

The downside is that when the filter’s scroll bar comes up on the screen, it covers quite a bit of the frame. I would have much preferred a smaller preview of the filters. Swiping from right to left in the camera app, you get different grids like the rule of thirds, the golden mean and so on.

The Editor
The photo editing feature is quite good and the range of filters are fun to use. Within each filter you can apply Tilt and Shift, Vignettes and Light Bursts. To apply the Light Bursts, you have to twist both your fingers on the screen. This requires you to keep removing your fingers to see are you picture. Also, you cannot apply multiple effects, the way a Snapseed would do.

Apart from the usual suspects of brightness, contrast and so on, Flickr offers Levels control, Colour Balance in RGB and a decent Sharpen tool. All quite effective for a cellphone camera app.

This can easily be bypassed by changing the privacy to ‘Only Me’ if you want to save the photos without uploading to your Flickr stream. But then, this is extremely tedious and may be a point that you need to consider if you are not a regular on the Flickr platform.

Using the focus and exposure points for this picture was easy but applying the filter in the editor was a much better option than using the live filter view. Photograph/Natasha Desai

That said, with this new update, Flickr has upped its game. Barring a few annoyances, it is fresh. By not trying to be Instagram it offers a more serious mobile platform for photographers and photo enthusiasts. Combining filters with effects and control over your editing, Flickr seems to be in contention as a serious player. 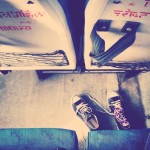 Louisiana: For outdoor portriats that are shot in sunlight, the crossprocessed look this filter offers is perfect. Otherwise it is just an average filter. Photograph/Natasha Desai 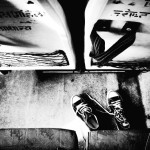 Noir: This exciting filter can add the drama of Fritz Lang or Hitchcock’s hollywood films to a picture you have shot with a yesteryears theme. Photograph/Natasha Desai 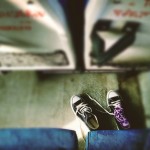 Dublin: The Tilt and Shift feature does not give you control over how much blur you can apply. You can only choose the area of focus.

What we Like
Animated interface, the focus and exposure control, the cool filters, levels

What we Dislike
Large filter view in camera, cannot apply Tilt and Shift, Vignette and Light Bursts together, cannot save edited photos without uploading to Flickr.

Why Buy It?
You can create and edit images on a more serious platform for your cellphone photography.

Speed & Responsiveness
Works better as an editing app than a camera app.
7/10