The Nikon D4 takes low light performance to such a level, that it is literally the eye of the dark. Raj Lalwani takes it through a series of midnight strolls.

Sometimes, we excel at something so much that we wonder how we can surpass it. I am sure Nikon must have faced a similar issue with the D4, considering that its predecessor, the D3S, has been the king of low-light photography for two years now. This is why testing the D4 over the past one month has been such an interesting exercise. After all, how does one improve upon a camera that barely had any faults?

Features
The D4 can shoot 16.2MP stills at 10fps with fulltime AF and AE. If you keep the focus locked, this speed can go up to 11fps. While the increase in resolution and frame rate is not drastic, the feature set otherwise, is quite different.

The D4 has a very neat 24fps shooting mode, where one can grab 2.5MP stills while shooting in Live View! This is perfectly usable for web uploads, which is something that will work well with this camera’s target audience. Most importantly, this feature allows completely silent shooting, with not even the slight sound that the Quiet mode produces!

The buffer capability of the camera has been taken to a whole new level. You can shoot up to 52 RAW files (14 bit, uncompressed) or over 130 JPEG frames until the camera pauses to write the images onto the CF card. If you are using an XQD card (a new storage slot that has caused its own share of debate) and shooting 12 bit compressed RAW, the camera’s buffer capability goes up to a crazy 100 frames! This is far higher than anything available in the market, including the direct Canon counterpart, the 1D X.

Unlike the 1D X, the camera does not need a maximum aperture of f/5.6 to use autofocus. So if you are a sports photographer who wishes to use a teleconverter on a slow lens, you need not worry—the AF sensors work even at f/8.

The D4 integrates a completely new AF sensor module, which makes a dramatic difference. Was the D3S slow or unreliable in terms of acquiring or tracking focus? Certainly not, but the D4 is a big leap forward. The first time I used the camera, I immediately realised how much more responsive the focusing is, in terms of initial focus acquisition. This is, quite clearly, a camera in a hurry.

The D4, along with the D800, are the only cameras in the world that can focus in light that is as low as EV -2 (as compared to the D3S and 1D X that can only manage EV -1). How low is EV -2? Let’s just say, it includes the darkest nooks and corners of the house that you might struggle to see with your naked eye, or a scene that is barely illuminated by moonlight.

This also solves a major gripe I had with the D3S. The AF would not lock on to the subject in extremely low light, though the sensor could ‘see’ everything. With the D4, I faced none of these problems. The Auto ISO functionality is superb, as the camera can now detect the focal length being used and automatically choose the minimum shutterspeed as its reciprocal.

An Ethernet jack and wireless compatibility with the WT-5 transmitter are ideal for news photographers on a deadline. In terms of video, while Canon has traditionally been better, the extent to which Nikon has gone to plug the gap, is mindboggling. The D4 is the world’s first DSLR to have a headphone jack for audio monitoring, a feature that has now been matched by the D800, 5D Mark III and 1D C.

When announced, it was also the only DSLR that can transfer uncompressed Full HD video through its HDMI port. Today, only the D800 and far more expensive 1D C can do the same. There is also a unique Timelapse mode. While I inadvertently underexposed this shot, the camera managed to retrieve great detail from the shadows. Exposure: 1/1600sec at f/11 (ISO 3200). Photograph/Raj Lalwani

Handling
Nikon’s pro DSLRs have always been ergonomically brilliant. Expectedly, the D4’s handling is quite refined, but some quirks took me by surprise. Unlike previous cameras, the buttons that will be accessed while using the vertical grip are in the same position as the buttons that are meant for the regular grip. This basically improves the shooting experience by a great deal, as you do not need to keep searching for a particular button, even if you change the shooting orientation.

The new joystick for AF-point selection is similar to the one found in Canon 1D cameras. I personally found it pointless. Considering that the Multi Selector has the same function, why would you have a second controller that does the same thing?
In fact, the very addition of this joystick shows the D4 is actually a departure from the way the company usually thinks. Nikon’s design has always been based on the philosophy that the photographer must get direct access to the functions he really needs, and not necessarily all the functions that he may want. This simple, practical approach has worked for all their high-end models. The D4, though, feels crowded with more buttons than what is required, due to which the buttons are also smaller. The placement of the Zoom In/Zoom Out buttons has been interchanged.

The new placement actually makes a lot more sense, but if you plan to use both the D3S and D4 at the same time, you will need to be very careful about double checking which camera you are operating.Previous Nikon FX DSLRs have had two switches—one that lets you choose between AF-S, AF-C and MF and another that allows you to toggle between Single Point, Multi Point and Dynamic Area.

Instead of this, the D4 incorporates the D7000-style AF button near the lens barrel. One needs to click the button and then move either of the two dials to choose the required setting. So while all AF options are now centralised at the same location, it is not so easy to change settings quickly.

The advantage with dedicated switches is that you can turn to the required setting purely by touch, while your attention remains on the subject and the moment that is taking place in front of you. Now, one needs to observe the markings within the viewfinder to find out which option is being selected. This is a huge step back and almost feels like the functioning of a consumer DSLR. 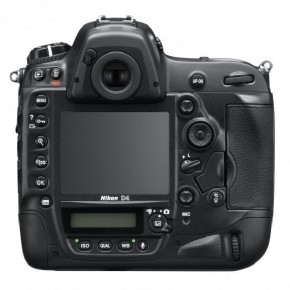 The addition of a joystick for AF-point selection comes at the expense of a dedicated AE-L/AF-L button. Pressing the centre button of the joystick does activate AE-L/AF-L, but the functioning is not as intuitive. The Stills/Video switch seems like a waste of space.

The top plate is similar to the D3S. The design of the Drive mode selector is now more refined though. Every time you switch from one Drive mode to another, you feel a definite click, which is why this setting can now easily be changed in the dark as well. 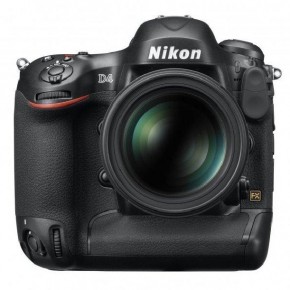 The D4 has a deep, sturdy handgrip and a useful and thoughtfully implemented vertical grip. The DOF Preview button (Pv) and Function (Fn) buttons can be customised. The button-and-switch mechanism near the lens houses all the AF settings.

Performance
With its low light and speed credentials, I wanted to take the D4 through a gruelling round of tests. Dim, murky alleys, cricket matches, portraits of a friend, streetlit architecture, chaotic crowds and handheld moonlit landscapes were just some of the subjects I explored.

The camera has a new metering system with a 91,000-pixel RGB sensor, as compared to its predecessor that had a 1005-pixel sensor. While the D3S was prone to underexposure when a pointed light souce entered the frame, the D4 corrects that behaviour. Instead though, the D4 has a tendency to overexpose scenes that have a lot of deep shadows.

The D3 and D700, and after that, the D3S had taken cameras to an entirely new territory. Never before had cameras produced such brilliant results at high ISOs, while maintaining plenty of latent detail in both shadows and highlights. In terms of noise performance, the D4 matches the D3S, despite its slight resolution increase.

At lower ISO settings, the dynamic range has actually been improved. Considering that the D3S was already exceptional, the advancement is even more admirable. The fact that an image shot at the Hi1 setting shows perfect colours, detail in shadows and can be printed at this size is a testament to the camera’s high ISO wizardry. Exposure: 1/2sec at f/5 (ISO 25,600). Photograph/Raj Lalwani

Conclusion
There might be a few D3S users who may not feel the need to upgrade to the D4. But then, if you shoot a lot in low light and have faced problem’s with focus locking, the D4 is a big step forward.

But its handling quirks left aside, the D4 is exceptional. For a news or action photographer, it is packed with every feature they need, and almost every one that they might want. The noise performance maintains the lofty standards set by the D3S, with additional resolution and dynamic range. Some of the ergonomic changes are not ideal, but eventually, the D4 can deliver in any possible situation.

In fact, that is the best and worst thing about such a camera. If you miss the moment, you just cannot blame the camera anymore! This is a camera that almost reacts faster than you do, ensuring that you never miss the moment. Exposure: 1/160sec at f/10 (ISO 800). Photograph/Raj Lalwani

Ergonomics
No switches for AF anymore, smallerbuttons, easy access to other functions
16/20

Who Should Buy It?
A news or sports photographypro who also wants access to great video.

Why?
The D4 improves upon the D3S in several ways, both in terms of features, focusing and dynamic range, while being as good, in terms of low light shooting.