Its predecessor is arguably the best compact camera around, but the new Canon PowerShot S100 just does not match up. Raj Lalwani tells you why.

There was just an hour left for my flight to New Delhi as I ran into the airport. In my hurry, I had not bothered to give the new Canon S100 a test run before I took it for a long trip up north. As I landed in the biting cold of the capital, I unboxed a camera that seemed so familiar. I had tested its predecessors, the S90 and S95, both of which were the best compact cameras of their time. The feel of the S100 brought back those memories, until I realised that things are different this time.

Features
There are some key differences between the S100 and the S95. Instead of a 10MP CCD sensor, the camera now uses a 12.1MP 1/1.7-inch CMOS sensor. According to the company, the sensor is designed to give better quality at high ISOs than any other PowerShot camera, not counting the recently announced G1 X.
The most significant change is the lens, though. The S95 had a 28–105mm equivalent lens that had a fast aperture of f/2 at the wide end and f/4.9 at the telephoto end. The S100 has increased the zoom range, but all of it is not good news. The maximum aperture at the wide end of the new 24–120mm lens is still f/2, but at the telephoto end, the lens is as slow as f/5.9. Considering that the camera’s biggest rival, the Olympus XZ-1 has a lens that is f/1.8 at the wide and as fast as f/2.5 at the telephoto end, the slowness of this new lens is a blunder. Simply put, if you need to use ISO 400 in a given situation with the XZ-1, the S100 will need an ISO of 2500 to get the same kind of exposure.
The S95 could only shoot 720p video and the functionality was strictly okay. The S100 is far superior, as it shoots Full HD video with fulltime autofocus and optical zoom while recording. The camera does not have a hot shoe, but it can shoot RAW photos. One can increase ISOs in increments of one-third stop, and the Auto ISO functionality is quite efficient. The Creative Filters are a lot of fun, especially the Toy Camera one. One just wishes they could be controlled further. Exposure: 1/60sec at f/2 (ISO 160) Photograph/Raj Lalwani

Handling
It is extremely unfortunate that the company decided to sacrifice the camera’s greatest strength—its customisability, just to add a ‘feature’—that of a GPS logger. The GPS module is placed at the top of the camera, which basically means that there is no space for any customisable button on the top plate. Sure, you can assign a shooting function of your choice to the Lens Control Ring, but the number of shortcut buttons has gone down.
If this was done to accommodate a vital photographic feature, it might have been excusable, but GPS in the S100, like most other compact cameras, is just a gimmick. Recording location coordinates is certainly not something that would be on the priority list of a professional who buys the S-series for its compact size. Moreover, one can only record the log of one’s location, unlike the latest cameras from Samsung that also allow you to download maps and search for places.
The Ring Function button has now been shifted to the back of the camera and it posed a rather unusual problem. I decided to assign the Step Zoom function to the Lens Control Ring, so that a simple turn of the ring would allow me to move from 24mm to 28mm, 28mm to 35mm, 35mm to 50mm and so on. In addition to this, I customised the Ring Function button to adjust ISO. This was similar to the way I like to shoot on the S95, with my right thumb adjusting the ISO and left hand controlling the framing.
But the Ring Function button has a definite lag time. Changing ISO is otherwise fast, when using the menu or while using the Lens Control Ring. There are some other problems too, unique to the S100. The reason why the S90 and S95 give superfast control is the fact that they allow you to adjust Exposure Compensation directly, by simply rotating the rear dial. When using the Program, Shutter Priority and Aperture Priority modes, one can darken or brighten the picture almost instantaneously.
This direct access has now been removed. So with the S100, one needs to press the Exposure Compensation button and then turn the dial (like any other compact camera). Presumably, the company has taken this step so that the setting does not get changed by mistake. But they could have simply made the grooves of the dial more resistive, or given users the option of choosing between the two behaviours.
The flash is an irritant. Considering how small this camera is, my left hand would naturally fall on the top-left area of the camera. This would obstruct the popping up of the flash at times, and the camera would freeze, saying “Wrong flash position, restart the camera.” Such tiny quirks are often the difference between great photographs and missed opportunities. While using Creative Filters, if one switches the flash off, shoots and then switches off the camera, the S100 does not remember the setting and goes back to its default setting. The LCD’s resolution of 460k dots is not too good in today’s day and age, when budget compact cameras also have an LCD of 920k dots. 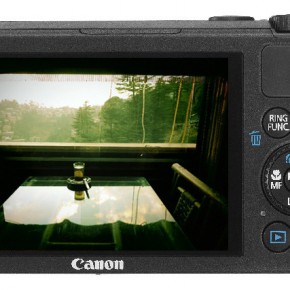 The inclusion of a thumbpad does improve the overall feel of the camera. The LCD has a resolution of 460k dots, which is below the industry standard in 2012. Since the Ring Function button is now at the rear, the customisable Shortcut button is omitted. 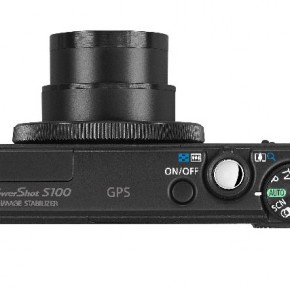 Unfortunately, the top of the camera does not have any customisable buttons anymore since the space is taken up by a GPS module that helps tag photographs. The camera is tiny even when the zoom is extended, but extremely sturdy. 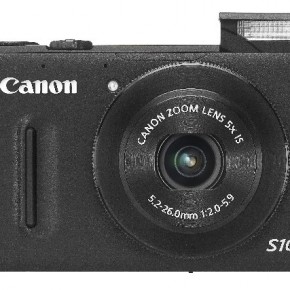 Performance
In terms of performance, there is not much to criticise, so let us get that out of the way first. The battery life is not good enough for a professional or a serious enthusiast. You would be well advised to invest in an extra battery. The lens is quite prone to flare, which was not as acute a problem with the S95.
That apart, the image quality is excellent. Sharpness is quite good, though we have seen compact cameras with better optics that deliver better detail. At high ISOs, JPEG processing engine does a great job of keeping the noise down, while retaining a good amount of detail. Photographs shot at ISO 1000 are well detailed, and if you are willing to shoot in RAW and postprocess your photos carefully, ISO 1600 is easily usable. This is a huge achievement for a compact camera and the only camera that comes close to this performance is its predecessor. Colours and White Balance: As compared to the S95, the JPEG results of the S100 are not so punchy. This is fine if you intend to postprocess the image. Each White Balance preset can be fine tuned, like this photo that was shot with a warmer version of Cloudy WB. Photograph/Raj Lalwani

Conclusion
I strongly believe that the value of a camera depends on the number of great photographs it captures. In that sense, the on-field handling is key… does the camera come in the way of the photographer? Or is it such a seamless experience that it becomes an extension of your eye? The S90 and S95 fell in the second category, particularly because of the large number of direct control buttons.
True, the S95 could not match up to the XZ-1 in terms of optical speed and sharpness, but the ergonomics were far superior to any camera at its price point. This is why it is particularly frustrating that the S100 has severely compromised on handling, simply to accommodate a few additional features.
At a price of Rs. 26,995, the S100 is overpriced—more expensive, in fact than some of its more illustrious peers. The Olympus XZ-1 has a much faster lens, is more versatile and is slightly less expensive. Another option you have is a Sony Alpha NEX-5. While this may not be pocketable, it produces far better quality— again, at a cheaper price. Most importantly, if you appreciate the ergonomics of the older model, the S95 is still available, at a price of only Rs. 21,995. In this scenario, does the new PowerShot S100 make any sense? Best compact camera no more… the crown has fallen. Sharpness and Dynamic Range: While the corner sharpness suffers at the telephoto end, the quality at the wide end is quite good. The dynamic range in JPEG files is excellent, and the RAW files allow some additional headroom. Photograph/Raj Lalwani