The Canon EOS 1100D is an upgrade of a popular DSLR, but it enters a fiercely competitive entry-level sphere. Neha Mutreja puts it to the test.

Two years ago, the Canon EOS 1000D was the most popular entry-level DSLR in the market. Almost anyone who wanted to upgrade from compact cameras to DSLRs would choose the 1000D—it performed really well and gave excellent value for money.
However, the last one year has seen a major upheaval in the entry-level segment. Other manufacturers like Nikon and Pentax have released some exciting DSLRs that have had more features and far better performance than the now-old 1000D. Besides this, there are so many mirrorless cameras that are available nowadays, in the same price bracket. The consumer has a number of options indeed!
In the midst of this crowd, Canon finally announced the update of the 1000D, the all-new EOS 1100D. The company has released this upgrade after a gap of three years, which is a very long life cycle for an entry-level DSLR. After all this wait, I was quite excited to get my hands on the 1100D and test it on field.

Features
The 1100D has quite a few new things to talk about, but the overall feature set is still not as good as we expected it to be. It has a CMOS sensor, which has a resolution of 12.2MP. The camera can record 720p High Definition video at 30fps. However, it cannot shoot 1080p Full HD video, which has almost become the industry standard now. We found this rather surprising. Canon has always been at the forefront in terms of video capabilities in DSLR cameras. Also, there are other cameras in the same price range, which can shoot Full HD video. I wish that it had the ability to focus continuously during video shooting—a feature that has been incorporated in other entry-level cameras.
The 1100D can shoot up to ISO 6400, but does not have the provision of using expandable ISO (to, say, a value like ISO 12,800). The camera can shoot at a frame rate of 3fps, but only while shooting JPEG images. The shooting speed drops while shooting RAW, as does the buffer capability. Some of the 1100D’s competitors do far better in both these areas.
The camera’s autofocus and metering systems have been updated. Just like the more expensive 600D and 7D, the camera calculates exposure by using the iFCL metering system. It measures three factors—Focus, Colour and Luminance, and then determines the correct exposure.
Since it is targetting a rather basic audience, the 1100D has an updated Creative Auto mode, which I personally enjoyed a lot. Just like the EOS 60D, this camera’s Creative Auto mode has a Basic+ option, which allows you to fine tune the final look of the image.

Handling
The 1100D is a curious-looking camera, and not just because it is the first Canon DSLR to be available in different colours. Unlike its predecessor, this camera has a smooth plastic finish, which makes it look rather distinct. This glossy finish was specifically seen in the Canon 300D,launched in 2003. This has obviously been done to reduce the the weight and cost of the camera, and also gives it a flimsy look. However, appearances can be deceptive, as this camera’s build quality is actually quite good. It has a construction that uses a glass fibre armour over a stainless steel chassis.
I particularly enjoyed the large buttons of the 1100D, which are far superior to its predecessor, as well as the competition. I found them specifi cally helpful while shooting action-packed performances as I could change essential settings easily.
I was surprised to see that the camera’s body is not rubberised at all. That said, the grip itself is reasonably substantial, making it comfortable and reassuring. Unfortunately, the memory card slot is now inside the battery compartment. This makes it difficult to change cards when the camera is mounted on a tripod.
Canon seems to have changed its design philosophy with this camera. When I first tried to use the flash of the camera, I found myself searching for its button. But once I realised that it is next to the shutter-release button, I got used to this novelty. If you have used previous Canon bodies and find this confusing, you can assign the button to adjust ISO instead. The camera offers more customisation options. The Set button can be used to access the menu, get a DOF preview, switch the display on and off, or to adjust Flash Exposure compensation.
The LCD is easily visible in bright sunlight, but has a resolution of only 2,30,000 dots. This seems rather outdated, considering that some mirrorless cameras have three times the resolution.

Performance
I used this camera extensively to shoot religious processions and fireworks. I constantly kept shooting while travelling from place to place. The battery life of the 1100D deserves a special mention as it is far superior to most other entry-level cameras. The autofocus performance is fast and accurate, both in the daytime and at night too. The Live View performance of the camera is disappointing, as the camera takes a very long time to lock focus. The Evaluative metering mode of the camera does a decent job in most conditions, but it has a tendency of overexposing the photograph in high contrast conditions.
The low light perfomance of the camera is very good, and is easily as good as any camera in its class. ISO 1600 produces excellent results, with minimal noise and good amount of detail. Beyond this, the noise reduction applied by the camera makes the images slightly soft. This is why we would recommend the use of RAW while shooting at such ISO settings. The colours reproduced are accurate and rich, specifically the reds.
Though the video specifications of the 1100D are relatively modest as compared to the market, the quality of the 720p video is smooth and without any without any artefacts. The sound recorded through the Mono mic is very clear, but it has a tendency of capturing ambient noise.

Conclusion
There is no doubt that the Canon EOS 1100D is an excellent performer—both on field, and in terms of image quality. However, is this camera a worthy successor of the much-loved 1000D? The answer is not so simple. When compared to its predecessor, the camera is a solid upgrade, with almost every feature and performance-related parameter being improved. However, three years is a long time, and the competition has pulled up its socks as well.
It is in terms of features that we are slightly disappointed. The 1100D lacks a few features that the competition has, and yet costs the same. We would highly recommend this camera, but only once the prices drop. 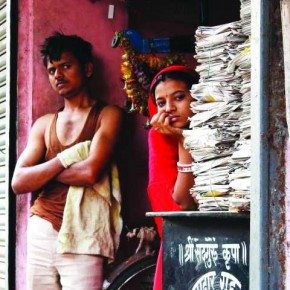 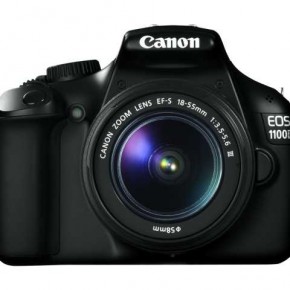 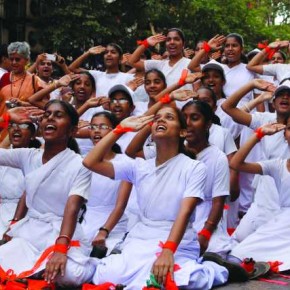 Even while shooting from the hip, the camera’s AF system identifi ed the main subject and locked focus. Photograph/Neha Mutreja 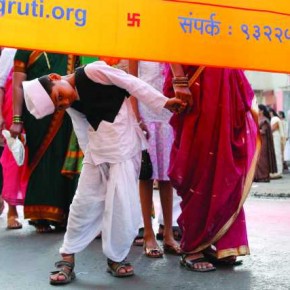 The 1100D produces images that have warm, pleasing colours. The metering did a decent job in a scene that is dominated by white tones. Photograph/Neha Mutreja