Neha Mutreja checks the credentials of the Panasonic LUMIX DMC-GX1, a lightweight camera that vies for the attention of a pro on the go.

The past few years have seen several manufacturers releasing cameras that are small, convenient and yet, do not compromise on features and image quality. Panasonic has been at the forefront of this mirrorless revolution, with some interesting cameras like the G, GF and GH series that targetted different sections of the audience.

Now, there is a fourth lineup of mirrorless cameras that the company has introduced—the GX series. How does the new Panasonic LUMIX DMC-GX1 compare to previous cameras of the same company? What is its place in the crowded mirrorless market? I was keen to find out.

Features
Despite the fact that its name suggests a brand new series, the GX1 is actually a successor of the GF1, a camera that had gained a lot of popularity when it was first released. At its time, the GF1 was a very capable camera, but it had not fared too well on the Better Photography test bench because its delayed launch in India happened at a time when the rest of the market had gone past it. The GX1, on the other hand tries to mend its predecessor’s mistakes, with a better timed release and a more conservative price tag.

The camera includes a new 16MP sensor, similar to the one used in the Panasonic G3. It is quite a fast camera, with 4.2fps shooting enabled, even while capturing RAW+JPEG. If you are okay with a reduced resolution of 4MP (which is more than enough for web uploads), the camera can fire away at 20fps. In this mode, the camera shoots 40 frames and then pauses for a few seconds to writethem onto the card. The camera has a few Creative Controls, which are similar to the Art Filters found in Olympus PEN cameras, but the manner in which they are implemented is not too good. The effects are not so dramatic, nor are they as useful in real-world shooting. Also, if you try to control depth in this setting, the process of doing so is extremely confusing.

The GX1 does not sacrifice any features for those looking for hands-on control. The camera has a hot shoe, the inclusion of which was a relief, considering that the GF3 did not have one.

The flash sits on the left corner of the top panel. While testing, I realised that the flash head can be shifted upwards, just like an external flashgun! This is something that is usually not there in other cameras, so the GX1 is a unique camera that allows you to bounce the light off the ceiling, without investing in an expensive flashgun!

Unlike their PEN counterparts, Panasonic mirrorless cameras are not equipped with in-body image stabilisation. Instead, the company chooses to include the technology in their lenses. There are pros and cons to both approaches. Optical stabilisation is usually more effective. However, only half of the company’s lenses are actually stabilised, which means that when you are using the other lenses, you cannot take advantage of this feature at all. Handling
There are different kit options that you can avail of. For instance, you can buy the dual lens kit, which includes the old 14–42mm MEGA OIS lens, along with the tiny 14mm pancake lens. Alternatively, you can buy the powered zoom kit, which has a much smaller 14–42mm stabilised lens, but is also more expensive.

The GX1 has plenty of direct controls to customise settings, as per your requirement. For instance, the Q.MENU button gives you quick access to settings like Aspect Ratio, ISO, Metering, WB, and Focus Mode.

Besides this, there are as many as four customisable function buttons on this camera. Two of these are external buttons, whereas the other two are virtual and can be set within the touchscreen interface. Additionally, you can also configure and fine tune the overall handling experience, thus making it easy for you to switch between modes and shoot instantly.

The touchscreen itself is reasonably refined, by camera standards, but is still not as efficient as screens found in cell phones. Besides the two virtual function buttons that were mentioned earlier, there is the 1-Area AF option that allows you to drag the focus point by simply touching the screen.

I wish the LCD was of a higher resolution though. 4,60,000 dots sounds decent, but in todays day and age, even compact cameras have started incorporating high resolution LCDs that have around 9,20,000 dots.

Unlike previous cameras, Panasonic has finally added a Level Gauge that can be of use if you wish to keep the horizons straight. This feature has been there in the other cameras of the segment for a long time now, so it is a welcome addition.
The GX1 does not have an inbuilt viewfinder, but you can attach the new Panasonic DMW-LVF2 viewfinder that needs to be bought separately. But then, the camera is not compatible with the older viewfinder that GF1 owners would use. This lack of backward compatibility is unfortunate. 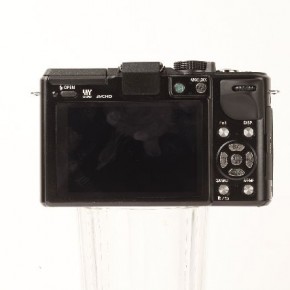 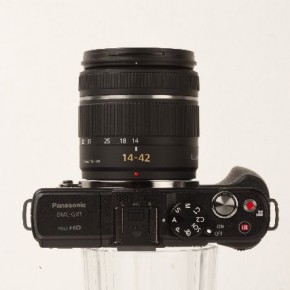 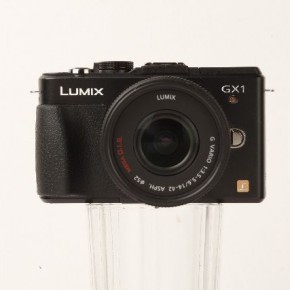 Performance
This camera became my constant companion because of its lightweight nature. Its autofocus is extremely fast, while shooting still subjects, and is easily at par with the competition. With an improved buffer of 11 RAW frames that can be captured at one go, I never faced a problem with the camera’s overall responsiveness.

The JPEG images are not up to the mark as there is a colour shift seen in images shot at ISO 1600 and above. I wish the JPEG engine was as efficient as the one found in the PEN cameras, especially in terms of giving vibrant colours, while maintaining accuracy.

However, the RAW quality of the GX1 is very good indeed. Images taken up to ISO 800 and 1600 are quite good. The image quality starts deteriorating from ISO 3200, but photographs are definitely usable, even at the highest ISO settings. Its metering system is excellent and works well in tricky lighting conditions too.

The GX1 offers Full 1080i HD Video shooting option, both in AVCHD and MPEG-4 format. As far as the video performance is concerned, it is decent but does not even come close to something like the superb GH2.

The colours rendered by the camera are true to life, but according to me, you should always process RAW files for better transition between tones. Photograph/Neha Mutreja

While the GX1 lacks certain features over the competition, there is no doubt that the company has finally combined the best of both worlds, by combining the G3’s technology with the GF1’s small size and handling experience.
For a serious photographer who wants to travel light and also exercise a lot of control over his photographs, the Panasonic LUMIX DMC-GX1 is one of the better options out there. The quality of the images shot at higher ISOs is superior to that of the PEN cameras, though it does not reach the level of some APS-C sensor mirrorless cameras. Photograph/Neha Mutreja

Who Should Buy It?
Street and travel photographerswho want a lot of external control at their fingertips.

Why?
It may lack additional features like customisable Art Filters and in-body stabilisation, but makes up for this with its superb ergonomics and excellent RAW image quality.