The brand new Canon Digital IXUS 310 HS promises a whole host of features. But does it live up to its promises? Supriya Joshi finds out.

Tiny cameras have been a subject of fascination for me for the longest time. Canon’s new Digital IXUS 310 HS is small enough to fit in the palm of my hand and comes with a bunch of features for every genre of photography. How does it measure up in the performance department? Here are my findings.

Features
A successor to the 300 HS, the IXUS 310 HS is a 12.1MP camera that is based on a touchscreen user interface. While the camera may seem rather similar to its predecessor, it has a significantly wider lens that gives you a focal length that is equivalent to 24–105mm (in 35mm parlance). The lens is quite fast at the wide end of the zoom, and has a maximum aperture of f/2. This allows you to obtain a reasonably shallow DOF, as compared to other compact cameras. Also, combined with a wide focal length and excellent image stabilisation, the camera actually allows you to shoot in reasonably low lighting conditions with ease.
Unlike the lesser expensive IXUS models, the IXUS 310 HS comes equipped with semi-manual control, with the availability of Aperture Priority, Shutter Priority and Program modes. But where this camera truly stands out is with its video capabilities. The IXUS 310 HS shoots Full HD 1080p video, as compared to the 300 HS that could only shoot 720p video. It can also shoot super slow-motion movies at 240fps, which is great fun to play with. The camera gives you one of the least expensive ways to experiment with slowmotion action. Tiny microphones, placed on either side of the lens, do a good job of recording stereo sound.
The camera comes in four colours, and I tested the chocolate-coloured one. Here is a tip for you—do not use this camera when you are hungry. You may just want to take a bite off it!

Handling
Though it has a rather smooth finish, it lacks a definite hand grip, so one’s fingers tend to slide over the smooth surface. If it had not been for the hand strap, the camera could have very well slipped from my hands. I would advise you to always have the hand strap around your wrist when you are shooting.
The rear of the camera is completely occupied by the LCD screen, which is one of the major improvements in the camera as compared to the 300 HS. The LCD is larger and has a higher resolution of 4,60,000 dots. The responsiveness of the touchscreen takes some getting used to and navigating between modes can be troublesome. In fact, whenever I would want to shift between an automated mode and something that gave me more control, I sorely missed the dedicated mode dial. Another downfall of the touchscreen interface is the fact that you are bound to leave fingerprints. Quite unsightly, really!

Performance
For the first few days that I was testing the camera, I took it to a picturesque promenade and made pictures while the rain poured down. The autofocus system proved to be quick enough, without needing to resort to the touch AF capability.
I also took the camera to a trek in a nature park to test out its various functions. It is the monsoons, so the light was constantly changing, but the metering system of the camera was spot on in absolutely every instance.
During the trek, I tried my hand at photographing butterflies and would go really close to them. This was where the camera’s extreme close-up capabilities shone through. The colour reproduction was excellent and the details on the wings of the butterflies were captured perfectly. This showed how good the resolution and quality of the lens is, especially when compared to other compact cameras. Using higher ISOs does reduce the quality, but the images are mostly usable up to ISO 1600.

Conclusion
The Canon IXUS 310 HS, priced at Rs. 19,995, is significantly cheaper than its predecessor. The price may still seem high, but in comparison to other IXUS cameras, it is quite competitive. At the end of the day, whether you buy this camera or not depends on how much importance you place on video and how comfortable you are with a touchscreen interface. For more traditional users, you can look at other options from the PowerShot series. 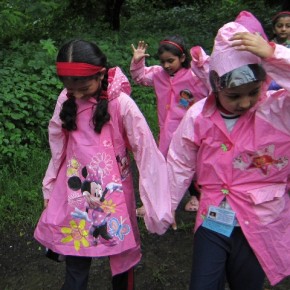 Besides good colour reproduction, the IXUS 310 HS allowed us to recover a lot of latent detail from this underexposed photograph. Exposure: 1/1600sec at f/2 (ISO 200) Photograph/Supriya Joshi