When it was first released, the popularity of the PEN system had a lot to do with its small size and the novelty factor. Two years down the line, the company obviously realised that the system would need to expand to sustain itself and to cater to the pro market. One new lens that Olympus has launched in the process is the super telephoto M.ZUIKO Digital ED 75–300mm f/4.8-6.7.

Features
When coupled with a Micro Four Thirds camera, this lens offers a massive reach, of 150–600mm (in 35mm parlance). For focusing purposes, the lens employs a rear focusing system with screw-type drive to minimise any mechanical noise while using AF. This makes the lens ideal for shooting movies. The maximum aperture of the lens is quite slow, and is f/6.7 at the telephoto end! This makes it difficult to use the lens in low light.
The overall construction is actually quite complex with as many as 18 elements in 13 groups. Six special elements have also been used, to keep optical deficiencies at bay. The front element of the lens does not rotate, which is something I quite liked.

Handling
Usually, such lenses are really large and heavy. However, this lens weighs only 430g, making it only a fraction of the weight of a lens of this nature. Looking at this, one can easily say that this is the lightest 600mm lens available in
the market.
This means that the 75–300mm does not exhibit the ergonomic advantages that some other lenses have. I was quite disappointed to note that it does not have a focus limiter switch. The ability to limit the AF range is something that is a must in any telephoto lens, which is why the exclusion of this feature was quite surprising. Also, there is no
distance scale.
All that left aside, I was really thrilled to be testing this lens, because of its size advantage. However, this excitement lasted only for a few moments. Though it is light, there is a considerable extension at 300mm. When used with the PEN camera, the combination makes the lens very heavy. It almost felt as if the camera was attached to the lens, rather than the lens being attached to the camera. The lack of balance made it difficult to shoot, especially because an equivalent focal length of 600mm is nearly impossible to frame accurately using the LCD. I will definitely advise you to use this lens with a monopod, or buy the company’s proprietary electronic viewfinder to make best use of the lens.
The zoom ring is wide enough to grip, and offers a good amount of friction while zooming. The focusing ring is comparatively narrow and ribbed. The lens is mostly made of plastic, apart from the mount, which is made up of metal.

Performance
When used with the PEN E-P2, the focusing speed of the lens is fairly quick, but it is nowhere close to conventional DSLR lenses. When I tried shooting more demanding subjects like a bird in flight using the camera’s C-AF mode, the speed was very slow. Due to the slow maximum aperture of the lens, it tends to hunt for focus when the light levels fall, especially while shooting at the telephoto end.
The optics of the lens are very good indeed. There is a very slight hint of chromatic aberration in high contrast photos shot against the light, but this is visible only when the images are viewed at 100%. Vignetting is well controlled. The distortion is remarkably low at both ends of the telephoto zoom length. The bokeh is smooth, thanks to the 7-blade diaphragm.
The overall sharpness is very good at all focal lengths, when used at apertures like f/8 and f/11. At 75 mm, the lens is quite sharp even at the widest aperture. At the telephoto end, it shows some softness, but the quality is within acceptable limits. I would strongly recommend you not to use apertures narrower than f/11 though, as diffraction affects the quality.

Conclusion
The Olympus M.ZUIKO 75–300mm is available for a price of Rs. 63,595. The pricing is competitive, considering the massive reach of this lens, but Micro Four Thirds users may find it quite steep. The closest competitor of this lens is the Panasonic 100–300mm, which is, unfortunately, not available in India.
One cannot fault the optics of the lens, but the main thing that would bother a user is the fact that the fastest aperture at the telephoto end is only f/6.7! This makes the lens rather difficult to use in low light conditions, and will limit its applications somewhat.
You should remember that a long zoom like this is a very specialised lens. Buy it only if you are sure that you need it. If you are a Micro Four Thirds user who falls in that category, the Olympus 75–300mm is reasonably competent, but only as long as you are shooting in decent light. 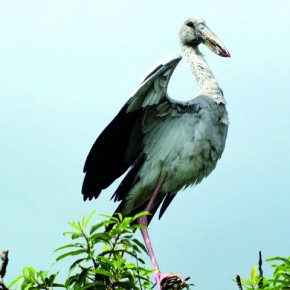 While the 75–300mm offers great reach, it is useful only for stationary or slow-moving objects. Exposure: 1/3200sec at f/8 (ISO 800) Photograph/Shridhar Kunte