K Madhavan Pillai discovers that Canon’s new 1-inch sensor superzoom, the PowerShot G3 X, is the first of its kind, and targets a new audience.

Things are just getting interesting in what seems to be the birth of a new segment in high-end compact cameras—the 1-inch sensor superzooms. Sony started it all with the Cyber-shot RX10 in late 2013, with a 24-200mm f/2.8 (35mm equivalent) 8.3x zoom. The Panasonic LUMIX FZ1000 (25-400mm f/2.8-4, 16x zoom) was released in August 2014 and created quite a stir with its 4k video capabilities. Earlier this year, the RX10 Mk II was launched, and essentially has the same lens as its predecessor, but a new 4k video capable sensor, apart from other high frame rate features. Recently, Canon decided the join the fray with the its 25x zoom offering, the PowerShot G3 X, featuring a 24-600mm f/2.8-5.6 lens.

The resolutions of the cameras are identical at 20.2MP. We have yet to test the FZ1000 (not yet available in India) and the RX10 Mk II (coming to us shortly). But the extra zoom reach of the G3 X will almost certainly interest a new audience beyond its competitors. And here is why…

Features
Avid nature, bird, wildlife and sports photographers have, so far, been limited to superzxoom compact cameras with much smaller sensor (1/2.3-inch), compromising quite heavily on image quality, especially in low light. A 1-inch sensor, coupled with the reach of a stabilised 24-600mm, is easily a huge advantage, and the first of its kind.

Going by our experience with the Canon G7 X tested earlier (which uses the same sensor as the G3 X, the quality of which surprised us), we know that ISO 100-800 is as good for professional use, and up to ISO 3200, noise is very well controled, with ISO 6400 being usable as well. The G3 X goes up to ISO 12,800. The camera is able to shoot at 5.9fps (with AF locked at the first frame) or a much slower 3.2fps (with continuous AF throughout). The menu system of the PowerShot G3 X does not have an option to choose a colour space. Yet, it does a great job with colours. Subtle tones are rendered accurately. Photograph/K Madhavan Pillai

The sad part is that the G3 X does not have an in-built electronic viewfinder, unlike the competition. Apart from the fact that I personally prefer EVFs to LCDs, it becomes sorely needed, especially when shooting at higher focal lengths. Canon does have an EVF accessory though (the EVF-DC1), which can be attached to the accessory shoe, but it needs to be bought separately. This is an aditional cost that photographers from any of these genres, who are contemplating buying the G3 X, will have to live with.

While I am personally not into wildlife, I was interested for a different reason. The macro mode lets the G3 X focus down to about 2.9 feet at 600mm and 1 inch at 24mm, for what should be good focus blurs at f/5.6… good for portraiture as well.

Background blurs also work well with video and the G3 X is fully video capable, with 60p1080, microphone and headphone jacks, audio controls, an extra slot at the base for video tripod plates, manual exposure control, manual focus, and built-in threestop ND filter that can be enabled for stills too. For a recent release, I would have preferred if Canon built in 4k and high frame rate video capability. While this may be simple enough to ask and not so easy to deliver (the competition has it though), it would have gotten yet another type of user interested in the G3 X. At the least, I would have liked my investment into a new camera to be futureproof for the next three years.

Additionally, the camera features a comprehensive set of exposure and scene modes, two custom user profiles slots, a mode that creates a number of creative filter images and crops from a single exposure all on its own, HDR, and a full auto mode as well. Oddly enough, several functions, including colour modes, dynamic range correction, shadow retrival can be enabled only if you are shooting JPEGs and not RAW, or RAW + JPEG. Similarly, if RAW is enabled, none of the colour modes can be used for shooting video as well.

A big advantage of the G3 X over the competition is its 180O tilting 1,620k touchscren LCD, which can be used to access settings, define focus, and release the shutter as well.

Handling
The camera handles exceptionally well. Despite a much bigger zoom range, the G3 X is smaller than its rivals. With a magnesium allow body and dust and drip-proof weather sealing, the build quality is excellent. The lens protrudes a lot when extended to the tele end, and one need to be careful of knocking it somewhere. This is possibly the only compromise in its build.

In terms of controls and handling, a large level of customisation allows the camera to be set acording to user preferences. For instance, even the focus ring can be customised to cycle between ISO values, aperture or shutterspeed during AF, and switch back to being a focus ring during MF. 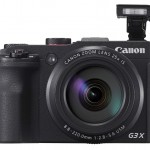 The lens dominates the front of the G3 X but provides a good hold for the left hand… perfect for an EVF, which unfortunately is not in-built. A switch on the side releases the pop-up flash and it is high enough to prevent the lens from throwing a shadow at the wide end. 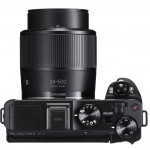 The G3 X can seem boxy at first, but the grip is nicely recessed and the hands fall into the right place. I have always appreciated a dedicated exposure compensation dial. The wide MF ring can also customised to change a large variety of settings, including ISO. 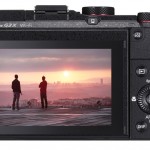 The touchscreen LCD takes up most of the back. A ‘Q’ or Quick access button to common setting is available at the top right on the touchscreen as well as with the Set button. A few of the infrequently accessed physical buttons at the back are tiny and take getting used to.

Accompanying the MF button on the side of the lens barrel is a Framing Assist Seek button, which is exceptionally useful to acquire a subject from a zoomed out view. Pressing it down while using the zoom rocker allows you to virtually trace a rectangular outlined zoom position onto the view on the LCD. Releasing the button then activates the lens to optically zoom exactly to that point. Both the MF and the Framing Assist Seek button can be customised to other functions.

The touchscreen is superbly responsive and quick, and the display information can be customised too. A ‘My Menu’ tab on pressing the Menu button can be populated with specific menu options. I wish the ‘Q’ or Quick Access panel on the LCD could be customised as well.

Yet, on the whole, all of the most important settings can be set to dedicated buttons and dials in a number of ways, making handling quite intuitive.

Performance
I had mentioned a great sensor as a feature of this camera. The image quality it produces is undeniable. For all practical purposes, I can go so far as to say that the dynamic range, colour rendition and noise performance rival some of recent APS-C sensors. The lens of the G3 X keeps up with the sensor too, producing sharp results almost up to the telephoto end, where the edges get a bit soft. Sharpness at the centre is maintained well.

The G3 X locks focus precisely in most conditions. The AF system tracks effectively too. In low levels of light, AF expectedly suffered at the tele end as a byproduct of a smaller maximum aperture, with the camera taking a considerable amount of time to decide and lock focus. The user selectable B&W mode processes images with a slightly higher degree of contrast, which I liked. But this cannot be done while shooting in RAW + JPEG. Photograph/K Madhavan Pillai

Baring the lack of 4k and high frame rate options, the G3 X did respectably well with the quality of video too. IS in handheld videos was quite effective as well.

The only serious performance drawback was battery life. With IS continuously active, (the best option when using the LCD for framing while zooming across the range), I managed about 250 shots before the battery drained. Considering the target audience and price, this could have been better.

Conclusion
Despite some of its minor quirks, the Canon PowerShot G3 X is a solid performer and handles well. It is also the only 1-inch camera in the market to feature a 25x zoom. Priced at Rs. 59,995/-, the G3 X has a price advantage over its closest competitor in India, the Sony RX10. Add the EVF as an accessory, and this price advantage completely dissappears. That said, its feature set and image quality alone would be of interest to many wildlife, sports and nature enthusiasts who cannot afford an APS-C kit with an equivalent lens.