Shridhar Kunte tests the Canon EOS 650D, the world’s first DSLR with a touchscreen, to see what other improvements the camera brings.

After looking at Canon’s last few launches, it seems as if they have stepped away from the megapixel race, at least temporarily. While the competition has released 24MP DSLRs, the company has stuck to a resolution of 18MP for its cropped-sensor DSLRs, the latest being the Canon EOS 650D.

Features
At first glance, it seems that the EOS 650D is very similar to the 600D, which was a rather underwhelming, incremental update of the 550D. But then, under its surface, the 650D does perform some new tricks.

Canon claims that the 650D uses a new sensor, but according to me, this is a modified sensor. There are some definite changes that have happened within the internal circuitry, to allow better autofocus performance in Live View, both while capturing still photos and shooting movies. In the 650D, a part of the Hybrid CMOS sensor is dedicated to using Phase Detect AF. When in Live View, this combines with Contrast Detect autofocus to reduce focus hunting for both stills and videos. In terms of image quality, the differences are more subtle, most of which we have explained in the Performance section of this review.

Even in regular shooting, the camera has a completely revamped autofocusing mechanism. It has a 9-point AF system, all of which are cross-type points!

Of these, the center point is a high-precision dual-cross type sensor, which is especially useful while using fast f/2.8 lenses. It is the first time that we are seeing such a refined AF system in what is eventually an entry-level DSLR.

The 650D is the first entry-level EOS camera to use the DIGIC 5 image processor, offering 14-bit processing for advanced colour rendition. This is another feature that is rarely seen in entry-level DSLR cameras. Due to the new processor, the camera is faster too, with a continuous shooting speed of up to 5fps.

In addition to this, there are several Creative Filters that can help you add a grainy B&W look or even pinhole-like effects, but like before (and unlike several mirrorless cameras), this is possible only after the image has been shot.

There are two other new features worth speaking of. The 650D can wirelessly control an external Speedlite or group of Speedlites, which is a feature that is still missing in its immediate competitor. The autofocus system is not only fast, but also incredibly accurate, far better than any entry-level DSLR. Exposure: 1/250sec at f/8 (ISO 2000). Photograph/Shridhar Kunte

Handling
One thing that bothered me was the spacing between the Q and WB buttons. When I was pressing the WB button with my thumb, the Quick menu kept getting activated accidently. This is because the buttons are smaller in general, due to the large LCD at the back.

While I first thought that this is a negative, I changed my mind when I realised how good the touchscreen is. Rarely have we seen such an efficient touchscreen on a camera, and the swipe, tap and pinch commands allow you to control the camera easily.

We tested this camera with the new EF-S 18–135mm f/3.5-5.6 IS STM lens. Here, the STM stands for the stepper motor used to drive the focusing mechanism, ideal for silent AF in video.

When I picked up the camera, the weight balance is quite nice with the kit lens. The polycarbonate resin and glass fibre armour over a stainless steel chassis makes the 650D’s body both light and tough. The grip is reasonably generous, by entry-level DSLR standards.

The balance with the kit lens is good, but as you mount a lens with a bigger barrel diameter, the camera becomes a little uncomfortable to hold. I was pleased to find the EOS 650D has a dedicated lever below the mode dial to switch on the video mode. 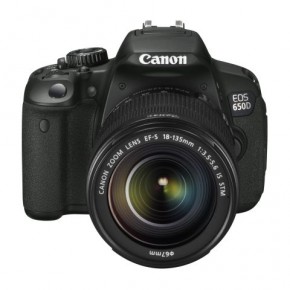 From the front, the camera looks very similar to EOS600D. On the right there is the flash release button, the lens release button, and the depth-of-field preview button. On the handgrip is the IR sensor that will sense the signal from remote control. 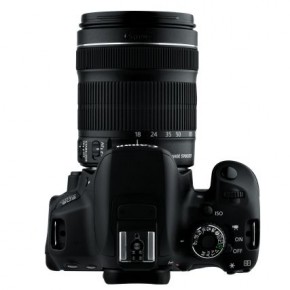 Below the mode dial there is an on/off lever with a separate position for activating video mode. There is only one button on the top to control ISO. There is an addition of stereo microphone just front of the hot shoe. 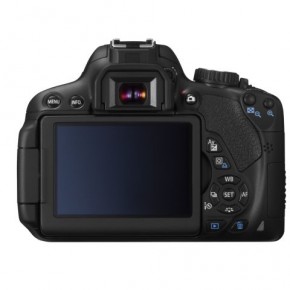 The major area on the back is taken by the touchscreen LCD. Autofocusing in Live View mode is activated by tapping the subject on the LCD. A Touch Shutter option activates the shutter on tapping on the area to be focused.

Performance
The AF speed is excellent, superior to the EOS 600D and Nikon D5100. While using Live View, the hybrid AF system works decently, but is definitely not as fast as some mirrorless cameras in the market, or even as fast as the Sony SLT cameras. I think Canon has to do some more work on this system.

There is no AF-assist light, so while focusing in really low light, the built-in flash needs to be raised manually, which can be quite disturbing for the subject. With the supplied SD card, the camera shot only three RAW + JPEG files before it slowed down. This is really slow as a higher resolution camera from the competitor captured eight RAW + JPEG files before slowing down. This clearly shows that the camera has a limited buffer capacity.

In terms of JPEG processing, Canon has adopted a punchy approach, which will suit the target audience. The noise performance is very good, but does not reach the level of the competition.

In bright, contrasty light, one tends to see blown out highlights often. The in-camera HDR works very well but unfortunately, this is possible only with JPEG images. Video quality is exceptional. Nine cross-type autofocus sensors, one of which is a dual cross-type point, ensure that the autofocus is quick and accurate, with a variety of optics. Photograph/Shridhar Kunte

Conclusion
Owners of the 550D and 600D should not get carried away, as the camera does not offer enough compelling reason to upgrade. For new users, there is no doubt that the camera’s video truly shines.

But there are many options from Sony that match or surpass the video performance, with faster AF. Image quality is good, but not the best in this class. The camera is feature packed, but has quirks like poor buffer capacity. The 650D could have been so much more, but it ends up with some stiff competition in almost every arena.

But then, videographers and touchscreen lovers will love this camera. It is the first time that a camera has incorporated touchscreen functionality so efficiently. Also, the autofocus capabilities are excellent for the camera’s price point, so if you are an action photographer, the Canon EOS 650D is a good buy. This mode, first seen in Sony cameras, works well. The camera rapidly fires four images and then combines them into one JPEG, to optimise detail and minimise noise. Photograph/Shridhar Kunte

Who Should Buy It?
Touchscreen lovers and those who want a second body with the 7D for action photography.

Why?
Never before has an entry-level DSLR focused so quickly or accurately. However, if you are a careful, leisured shooter and do not need video, you can look elsewhere. 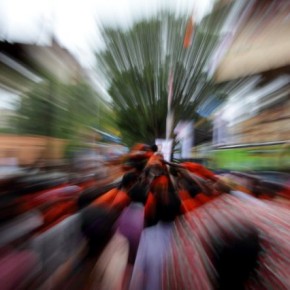 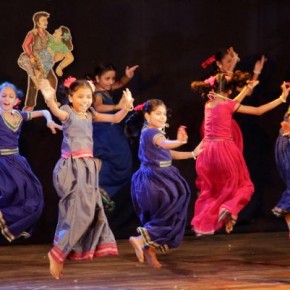