Shridhar Kunte tests the new 50.6MP Canon 5DS to find out whether the three-year gap for a megapixel leading DSLR by Canon is worth the wait.

Till very recently, Canon was adopting a rather conservative approach in terms of megapixels counts for full frame or APS-C DSLR cameras. While they may have had their rationale, and with no competing high resolution cameras from Canon in sight over the last three years, many previous users of Canon, who desired high pixel counts, had shifted their loyalties to Nikon. At Better Photography, even as we watched the tides turn between the ‘big two’ in the last decade, based entirely on technology and features, it remains an odd bit of trivia to know that Canon had announced an APS-H (29.2 x 20.2mm) CMOS sensor with a whopping 120MP resolution, back in mid-2010. Now it seems that Canon intends to do a big turn-around by introducing two new 50.6MP DSLRs. The EOS 5DS R has a cancelled optical low pas filter to maximise pixel level sharpness (but which can cause moiré). The EOS 5DS, on test this issue, is essentially the same camera, with a fully effective low pass filter over the sensor.

Features
For 5D series, Canon has borrowed some advanced features from the APS-C DSLR, EOS 7D MK II and from their flagship model, EOS 1D X. The newly developed full-frame 50.6 megapixel CMOS sensor is driven by dual DIGIC 6 processors, to share the burden of the large volume of data generated. The new design of the sensor involves gapless micro lenses that have been moved closer to the photodiodes, ensuring greater light gathering and an improved signal to noise ratio for cleaner high ISO performance. The tones produced and colours captured are smooth, neutral, and quite pleasing. Exposure: 1/2sec at f/11 (ISO 100), Flash on TTL fill. Photograph/Shridhar Kunte

The ISO range is from 100-6400 in 1/3-stop or 1 stop increments. Further, it can be expanded to include L: ISO 50 and H: ISO 12800 (the native, unexpanded range of the EOS 5D Mark III). The AF system is the same as that of the EOS-1D X series, with 61-point wide-area autofocus system, which includes a separate processor to handle AF calculations. Of these 61 points, 41 are cross-type and five are dual cross-type points, to help with focus accuracy and consistency.

Handling
For pro users, handling is just as important as features and performance. The body is made up of magnesium alloy and is weather-sealed against the elements, when coupled with weather-sealed L series lenses mounted on it. The 5DS looks similar to its predecessor, the 5D Mark III… even the control placements and the feel of it is alike. From the back, when kept beside 5D MK III, the cameras are difficult to identify. The big differences are all buried inside.

There are some appreciable design improvements though. The textured areas on both the deep hand-grip and around the more prominent thumb-rest on the rear of the camera allows more confident handling. A small elevated portion on the back acts as a hand-rest. This allows the right hand thumb to fall more comfortably on the textured surface on the back, and provides easier access to the rear Quick Control Dial, Multi-controller joystick and Live View/ Video switch. The 5DS is also more rounded on the corners. On the whole, the design allows long hours of comfortable use. 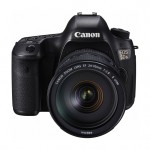 Not many controls are visible from the front. In the top right corner is the mono microphone for recording sound while capturing videos. On the handgrip is the IR sensor that will sense the signal transmitted from an IR remote control. 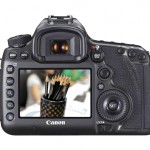 The mode dial is on the left, below which is the ON/OFF lever. The mode dial now has a lock to avoid accidental changes. Four function buttons are located on the top side of the LCD screen out of which three are dual function. 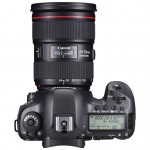 The LCD covers a large part of the back. Just above the top right corner of the LCD is the dedicated video recording button. The important buttons on the back of the camera are arranged vertically down the left side, with sufficient spacing for easy access.

Previous Canon users will also appreciate the familiar control wheels, characteristic of pro and semi-pro bodies… a smaller wheel on the top, near the shutter release button, and a bigger one (the Quick Control Dial for speedily changing exposure) on the back.

On Canon older models there was only one single lever for switching the power on or off, and to lock the rear command dial. This was criticised by many users. Now this is being separated into a power switch on the left of the top panel and a dedicated lock button which remains where the power button was. This prevents photographers from accidentally locking their camera’s settings while switching on the camera. Another welcome change is the addition of a mode dial lock to prevent accidental changes in the shooting mode. Canon is amongst the very few manufacturers to provide RAW processing software with the camera. On editing RAW files, the sharpness and detail are simply staggering! Exposure: 1/60sec at f/11 (ISO 800), external flash set manually to 1/64 power. Photograph/Shridhar Kunte

Canon has also added some useful functions in 5DS. For instance, in the playback mode, the camera allows to view any two images side-by-side for comparison. I found this quite handy, especially while comparing compositions. Even histogram information can be overlaid for comparison.

Not every change is positive in Canon’s control layouts of their more recent DSLRs. In the playback mode, the ‘zoom in’ and ‘zoom out’ buttons located near the thumb rest on the 5D Mark II and 7D, which could be quickly accessed, are gone. Instead users have to go through the magnifying button on the far left and then turning the front command dial to zoom in or out. I personally prefer the simpler, dedicated two button operation.

Performance
I tested the camera with several Canon L series lenses. I found myself using the excellent 35mm f/1.4L most often, and occasionally the 70-200mm f/4 L. Zoom lenses, that are otherwise perfectly sharp on the 5D Mark III, reveal all their flaws on the 5DS. This sensor necessitates the use of high-end block lenses, so be ready to invest in primes.

Focusing speed and accuracy were both excellent, even in demanding lighting conditions. I found myself using Zone AF quite often, in varied situations, and it rarely missed getting the target. The zones effectively function as selectable AF clusters. The selection of specific clusters is a key decision in ensuring you achieve 100% accuracy in focusing. Serious users can additionally fine-tune the camera’s tracking sensitivity and characteristics to their individual needs. For casual shooting, the six presets are perfectly capable too. When it comes to continuous shooting, the 5Ds (5 fps) is not as fast as 5D MK III (6 fps). Yet, given the huge file sizes, this is quite impressive. It manages 12 RAWs in a row, before the buffer fills up (again very impressive). But again, this was only possible because I was using a CF card rated at UDMA 7. Slower media cards are not an option if you need to get the best shooting speeds out of the 5DS. I was happy to find an SD card slot as well, though. The option to save the RAWs on the CF card and JPEGs to SD allows the buffer to clear faster.

At 50MP, the slightest camera shake becomes easily visible. To ensure that the mirror slap does not cause internal vibrations, the electronic motor-driven mirror mechanism is beautifully dampened. This also makes the 5DS much quieter than any of the other high-end Canon DSLRs. Excellent Evaluative Metering
In difficult lighting situations with high levels of contrast, the metering did wonderfully intelligent job of managing to maintain details in shadows as well as bright areas. Photograph/Shridhar Kunte

At lower ISO settings up to ISO 800, the image quality is truly exceptional. With pixel counts going up, image quality needs to be relatively considered. I was fully prepared to accept a compromise on high ISO performance, but the 5DS does surprisingly well on that front too, with ISO 3200 showing a good dynamic range and no colour shifts. Despite throwing up some noise and artefacts, the images cleaned up well and were usable. In-camera HDR worked very well too.

While the quality of video is crisp, resolutions are limited to 1080/30p. I would have hoped for at least 60fps, given the large processing capacity of this camera. There is a socket for an external microphone, but no headphone socket to monitor the audio.

Conclusion
Canon has clearly put their best foot forward with the EOS 5DS, for still photographers. The camera is priced at MRP of Rs 2,52,995/- (about Rs. 40,000 more than 5D MK III). The 50.6MP sensor is capable of delivering extremely fine detail, but this is not a camera for everyone. Sports, wedding and video users are clearly better off with the other Canon DSLRs. It delivers its best results at lower ISO settings, and with RAW. If you need extremely large images, and can combine careful technique with the best L series block lenses (which can get quite expensive), there is no other contender to the megapixel throne at the moment.