The newest entry-level APS-C sensor DSLR, the Canon EOS 1500D, is all set to follow in the footsteps of its impressive predecessors, to make serious photographers out of hobbyists. Nilofer Khan puts it to the test.

This story was originally published in September 2018. 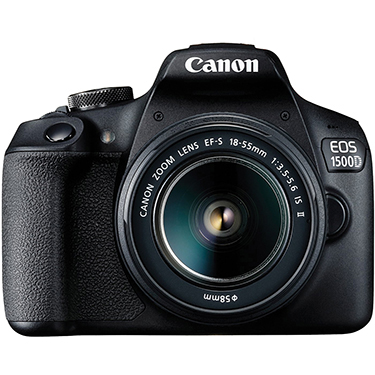 When Canon launched the 1300D back in 2016, the camera had useful additions like WiFi and NFC. This year, the company began to catch up with the current trend of higher resolution sensors with its successor, the Canon EOS 1500D. Like most other cameras in this range, it is aimed at beginners or students looking to buy their first DLSR, or bloggers on a budget. At first glance, it does not appear significantly different from the previous edition. However, among its most important upgrades is its sensor.

For AF, it has a 9-point phase-detection system, with only one cross-type AF point at the center of the frame sensitive to f/5.6, enabling One-Shot AF, AI Servo AF, or automatic AI Focus AF. Live view AF is enabled by contrast detection, but includes face detection as well. Focus works all the way down to 0 EV. In burst shooting, the continuous frame rates is 3fps. Exposure metering is enabled via a 63-zone system. You can choose between evaluative, partial, spot, or center-weighted average. Exposure can be compensated by ±5EV, and autoexposure bracketing is available for ±2EV.

Apart from the standard aperture or shutter priority, program, and fully manual exposure modes, the camera offers beginners with nine auto modes directly through the mode dial, denoted by easily understandable icons—fully automatic, flash-off, Creative Auto (CA), portrait, landscape, close-up, sports, food, night portrait. The CA mode lets you to customise the ambience, flash, and depth of field preferences, for a greater degree of control. Within auto modes, you can additionally enable ‘Shoot by Ambience’ settings, with eight options to play with tones and contrast—Standard, Vivid, Soft, Warm, Intense, Cool, Brighter, Darker, and Monochrome (this has three colour tones including Sepia, Black and White, and Blue). The final option on the dial is video (full HD at 30fps). There are creative filters effects as well—Grainy B/W, Soft focus, Fish-eye, Toy camera, and Miniature.

Among its other features is a reasonably powerful in-built flash with a guide number of 9.2m at ISO 100. The E-TTL II metered flash features flash exposure (FE) Lock, Auto pop-up, and can be manually enabled as well. The EOS 1500D also features a non-tilting 3-inch 920k-dot LCD. A flap at the side conceals ports for a wired remote, mini USB (oddly enough), and mini HDMI. Users can use the in-built WiFi/NFC to transfer their files onto their smart devices using the Canon Camera Connect app. The camera has a steel lens mount.

The kit lens is the EF-S 18-55mm f/3.5-5.6 ISII, a standard zoom that first came with the EOS 1100D, featuring image stabilisation algorithms that recognises the direction of a pan, disabling IS in that direction. 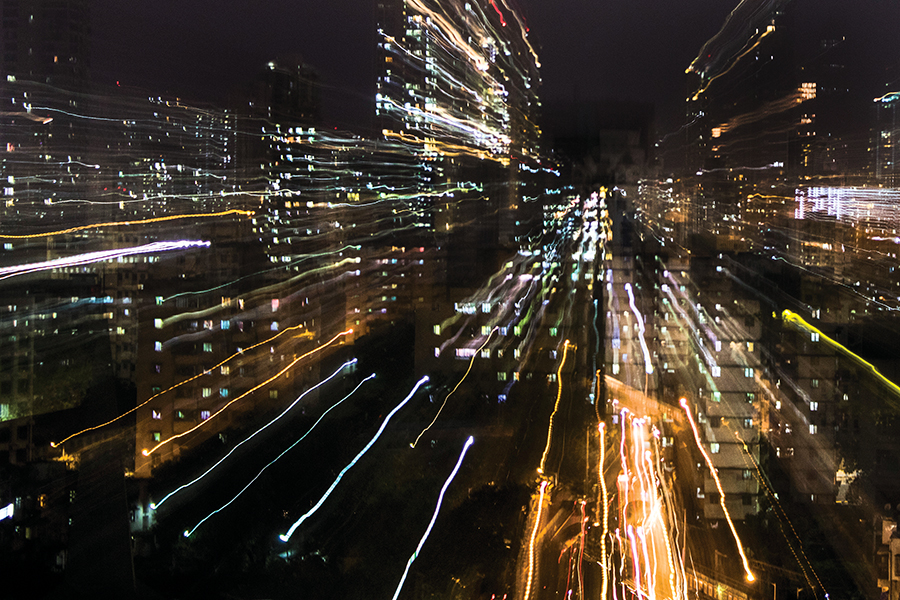 Handling
The 1500D’s polycarbonate body weighs a very portable 475g. It feels reasonably sturdy though, without any telltale squeaks or creaks. On the top of the camera, all the controls are placed on the right, including the pop-up flash button, allowing easy single-handed use. The flash needs to be enabled manually in the night mode, close up mode, and portrait mode, depending on lighting conditions and the desired effect.

The arrangement of physical controls is easy for a beginner to understand. ISO, White Balance (WB), and AF and drive modes have dedicated buttons to quickly change settings. Switching between modes shows a brief description on the LCD. The menu is simplistic and friendly as well. The camera uses bursts of flash as AF-assist to focus in dimly lit conditions, which can be annoying if you want to be inconspicuous. It can be disabled under Custom Function Settings. WB has six easily accessible presets, a custom WB, and two auto WB options—Ambience Priority (to retain tonal warmth) and White Priority (to eliminate colour casts). 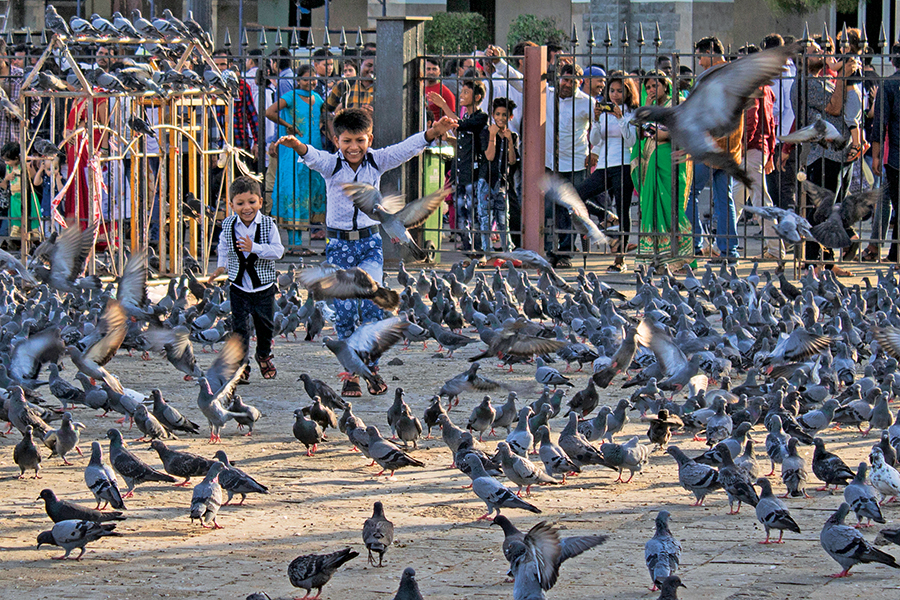 It usually does a good job of locking focus on moving subjects. Exposure: 1/250sec at f/5.6 (ISO 100). Photographs/Nilofer Khan

Performance
The new sensor does quite well with image quality at lower ISO settings. Up to ISO 1600, image quality is rather good, and then starts showing increasing luminance and chrominance noise after that, with images at ISO 6400 requiring significant noise correction. Converting RAWs separately delivers the best results at higher ISO settings, especially considering they are 14-bit files.

The 9-point AF is quite conservative by today’s standards. Subject tracking is reasonably effective but limited by these points. Yet, in single or continuous AF, combined with the kit lens, it is quick and decisive, but not entirely silent. Live View mode AF was slower, and not as effective, especially in lower levels of light or when a specific focus point is selected

During video shooting, the in-built microphone picked up the sound of the lens motor in quieter environments. In such conditions, it is best to focus manually. 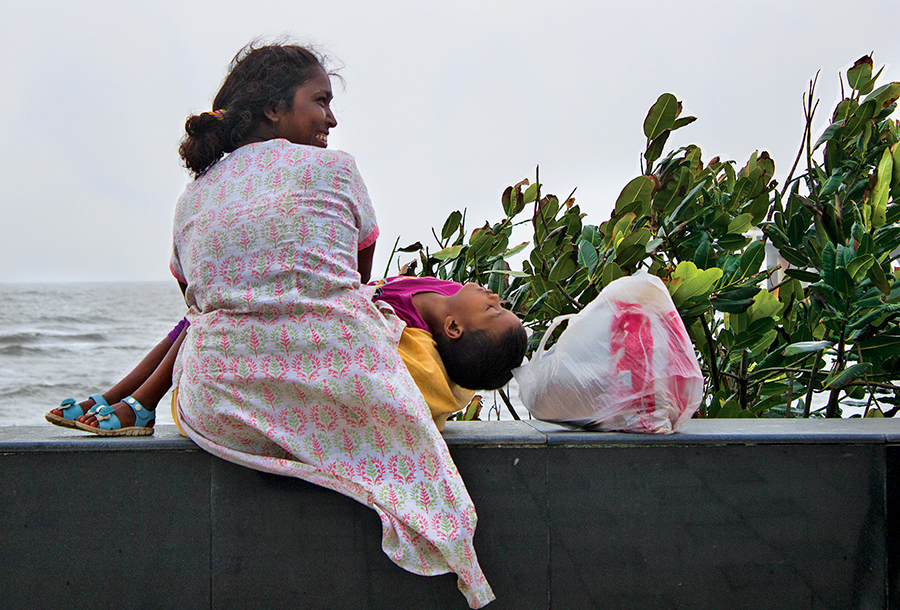 The EOS 1500D’s multi-segment metering does a good job of retaining details when the subject is shot against a bright background. Exposure: 1/1250sec at f/5.6 (ISO 200). Photograph/Nilofer Khan

Conclusion
In the hands of an experimental beginner willing to learn, the Canon EOS 1500D can achieve some exceptional results. However, going by today’s standards, I fully expected the camera to offer much more, particularly in terms of AF. Unlike many other Canon options, it also does not feature Dual Pixel AF for a better AF performance in both stills during live view, and video, in lower levels of light.

Priced at Rs. 37,995, the 1500D is on the expensive side for what it delivers, despite the inclusion of a newer sensor. It would be wise to look at alternative options, before arriving at a choice. Canon’s own mirrorless EOS M100 (priced at the same level), or the Sony A5100 (an aging camera priced slightly higher, but with great features) make excellent options too. Alternatively, you can also save up and opt for a more expensive and more versatile camera, for example, the new Canon EOS  200D.