As Raj Lalwani tests the tiny Canon EOS 100D, he wonders if this is the company’s actual answer to the mirrorless competiton.

The mirrorless party has been in full swing for the past few years, and Canon’s efforts to disrupt it with the EOS M were halfhearted. But while the joker in their pack did not seem to work, the company has now pulled out an ace. The mirrorless party now sees, hold your breath, a DSLR in competition. The new EOS 100D is the world’s smallest APS-C DSLR, and its incredible form factor is bound to ruffle some feathers.

Features
The 100D is an engineering breakthrough. Even several weeks after using it, I couldn’t help marvelling at how the company managed to fit an APS-C sensor, a mirror construction, optical viewfinder and the regular EF mount in a body that is so compact. To give you some perspective, ponder over this. The entry-level 1000D and 600D/700D are already quite small, as far as DSLRs go. Not only is the 100D much smaller than these cameras, it is actually less wide than certain mirrorless cameras!

Usually, such a design revolution comes with a compromise in terms of features or build. I was pleasantly surprised to note that there were barely any tradeoffs. Make no mistake. Though it is the smallest DSLR in the lineup, it is not intended to be the most basic one. In fact, the 100D is more like the 700D than the 1100D, something that is also indicative in its pricing. So the camera has an 18MP sensor, a Digic 5 processor that allows 14-bit RAW shooting and high-end video functionality that includes complete manual settings, audio level control and an external mic input. The quality of the 18MP sensor is what we have come to expect from Canon’s entry-level DSLRs. Exposure: 1/50sec at f/6.3 (ISO 800). Photograph/Raj Lalwani

The STM lens also allows you to focus during video capture, and along with the new version of the Hybrid CMOS AF system, it should facilitate quick focusing while using Live View for stills. The video focusing is nowhere near as good as the new 70D.

The compromises are mostly minor. The camera has a 9-point autofocus system, only one of which is cross type. This is identical to the low-end models like 1100D and 600D, but the 700D offers a far better AF system at only a slightly higher price.

But then, all this is on paper. While using the camera, I found the autofocus quick and accurate in almost every situation. A hobbyist would definitely be more than happy with the focusing speed and a professional would gain by using a good USM lens on the camera.

That said, I find the lack of an AF-assist lamp worrying. Canon has usually done this in their low-end models, requiring the onboard flash to trigger white bursts of light to acquire focus in the dark. This can get so obtrusive to a potential subject that it is best not used.

I was pleased to note that the flash can be used to trigger an off-camera flashgun, a useful feature that the competition has largely excluded, at this price point. Handling
Here came another pleasant surprise. Despite its shrunk body, the 100D handles as well as any entry-level Canon, and in certain cases, even better. The build quality is quite good and there is a good amount of external control. The touchscreen is capacitative and as good as the one found on the EOS 700D and M. Along with the intuitive interface and dedicated ISO and Quick Menu buttons, it makes the overall operation really fast.

Do remember that if you are a video enthusiast, you may want to go for the slightly larger 700D, or even the older 600D as both these cameras have tilt-andswivel screens. The LCD of the 100D is of very high quality, but it is fixed.

There are subtle things that the company’s designer have paid attention to. The position of the shutter-release button seems strange at first sight, but it makes complete sense once you wrap your fingers around the grip. The grip is not substantial, but reasonably comfortable, as long as you do not use a very heavy lens.

This brings me to my biggest gripe with the 100D. It is such an incredibly compact body, but where are the small lenses? In the mirrorless world, APS-C systems have a bunch of small lenses, but with the 100D, there are very few prime lenses that actually suit the camera’s size. The 40mm pancake is a perfect match, but strangely enough, the kit that the company is selling is with the 18–55mm STM lens. This lens, being larger than its non-STM predecessor, robs all the size advantage that the 100D gives. 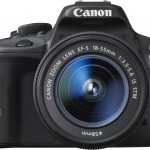 I was quite impressed by the aluminimum alloy construction. The placement of the shutter-release, and the distance between the ISO button and exposure dial are different from other Canons, but work great for a camera of this size. 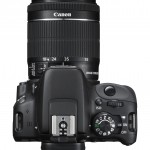 All the great work done by reducing the body size gets undone by the large kit lens. I wish the company had introduced kits with pancake lenses. If you are attracted to this camera because of its compact size, remember to invest in some prime lenses.

The buttons are not too small and well recessed. Though the screen is not articulated, the touchscreen functionality is fantastic. In conjunction with the buttons, the touchscreen helps make the overall operation really fast, indeed.

Performance
The 100D’s sensor is not as good as some of the competition, but it is the best amongst Canon’s cropped sensor options—with the exception being the new 70D that we have not tested yet. Noise performance is not the best at this price range, but the JPEG processing has been greatly improved and the amount of detail retained in images shot at ISO 3200 is decent. The 14-bit RAW files capture a good amount of detail in both shadows and highlights, and with a good lens, the camera’s sensor shines. I can see this as a great backup body for a pro.

The only worrying aspect in terms of performance, is the Auto White Balance performance. While shooting in warm, mixed lighting, we consistently got an ugly, orange cast and while shooting video in overcast weather, the camera overcompensated for the warm green tones in the frame, leading to rather unnatural colours.

The camera shares its battery with the EOS M, which had poor battery life. But thankfully, my apprehensions were set to rest… the 100D, with its optical viewfinder, is far more power efficient, and gets a good number of shots in one charge. Conclusion
I thoroughly enjoyed the Canon 100D, but it is a strangely priced camera. At Rs. 48,995 for the body, it is only slightly cheaper than the 700D, which has advantages like better focusing and a tilt-swivel screen.

If you do not need that kind of AF performance, you can save a lot of money and get the older 600D. It is Rs. 15,000 cheaper, has a tilt-swivel screen and may be bigger, but is not bulky by any means. Canon is clearly charging a premium for the size, and unless you believe in using prime lenses, this may not be worth the amount you are paying for it. Excellent Detail at Low ISO Settings, Good Flash Coverage: The amount of detail captured by the sensor-optics combination helped us make this tiny crop from a much larger frame. The onboard flash was used for illumination. Photograph/Raj Lalwani

Who Should Buy It?
Those who enjoy prime lenses and professionals looking for a light backup body.

Why?
It does not compromise on quality, handling or features, despite its tiny size. If you don’t mind a slightly larger body, get the 600D or 700D (based on your budget).