BenQ G1: Not a Superhero Ambarin Afsar tests the BenQ G1 on a variety of parameters and finds out that it falls short of most expectations.

When I found out that I was testing a compact with an f/1.8 lens and a tilt-and-swivel LCD, I was quite excited. Add to that the claim of being the world’s slimmest compact to have both, and my eagerness reached new levels. I also realised that besides the trend of packing more zoom into affordable cameras, companies are also moving towards providing better low light shooting. But, with the BenQ G1, I discovered that a fast aperture cannot be the only saving grace of a camera.

Features
A resolution of 14MP, a 3-inch 920k-dot swivel screen, an f/1.8 lens—the camera seems to offer a lot, on paper. But, it is hard to ignore the fact that for a slightly cheaper amount, you get a 16MP camera that offers an f/1.8 lens with a roughly similar optical zoom of 4.2x—the Nikon COOLPIX P310. It is the main competitor of the G1. The only thing that the Nikon P310 lacks, is a swivel screen.

If we take a look at the feature set, the G1 offers the P, S, A, M modes along with Background Defocus, Handheld Night Shot and Filter modes. The Defocus mode involves adding an unnatural amount of gaussian blur to the photo.

Oddly enough, effects like Lomo, Fisheye and Toy (the Miniature effect) have been put into the Scene mode list instead of Filters. The camera features 20 Scene modes, most of which are the usual suspects like Sunsets, Pets, Party, Text and so on.

Moving on, the camera features optical IS and can make macros at about 3cm from the lens. It also has a stereo microphone and and offers 1080p Full HD video.

Handling
The first thing that struck me about the camera was that it was rather boxy. I have also been testing a mirrorless camera, and strangely enough, both are roughly the same size! What I cannot understand is how a camera with a compact sensor and with lesser functionality than a mirrorless can be roughly of the same width. While the G1 might be slim, it could have had a better design to make it truly pocketable.

The LCD swivels out easily enough, but feels flimsy. Also, there is nothing to hold it in place when it is shut.

The camera features a dedicated mode dial, along with an exposure dial situated right below the mode dial, on the back of the camera. The wheel allows you to access shutterspeeds in the Manual mode and exposure compensation or Scene Modes in others. The four-way controller, too, has a dial that can be rotated. It takes a little while to get used to both the wheels, and not be confused, but they function smoothly.

The G1 has a video recording button and a ‘Q’ button that can be customised to settings like ISO, WB, metering, AF areas and so on.

Performance
The camera is slow. It takes a few seconds between each shot. In the 6fps mode, once it has made a batch of 13 photos, it takes a good 15–20 seconds to write them to the card! For this duration, the camera freezes and you cannot do anything but wait. The playback time taken between shots is also quite slow.

The AF is very sluggish and keeps hunting. The image quality is where the camera really shocked me. When there is bright source of light in the frame, besides blowing out, it turns into a weird blotch! The lens flares terribly and there is quite a bit of fringing. While the shot might look good overall, when you view it at 70 or 80%, you realise how much loss of detail has occured, with JPEG artefacts at even base ISOs.

Conclusion
The G1 starts out ambitious, but messes up horribly. For f/1.8 and a swivel LCD, a price of Rs. 18,990 seems okay, till you realise that the Nikon P310 is priced at Rs. 16,950. While the P310 lacks a swivel LCD, it more than makes up in functionality and image quality. Or, you could pay a little extra and get the Nikon P7100, which has a hot shoe, RAW and far better image quality. The lens flares so badly that any light source in the frame turns into a blotch. Exposure: 1/1800sec at f/8 Ambarin Afsar (ISO 80). Photograph/Ambarin Afsar

Who should buy it?
Avoid, unless you wish to spend a considerable amount of money for compromised quality.

Why?
Despite having excellent features on paper, this BenQ camera does not even come close to the performance of its peers, and it is more expensive. 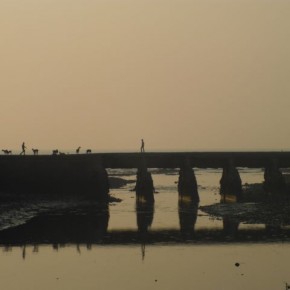