Tanvi Dhulia puts the Insta360 One X, a sleek-looking action camera with a wealth of nifty features, to the test. 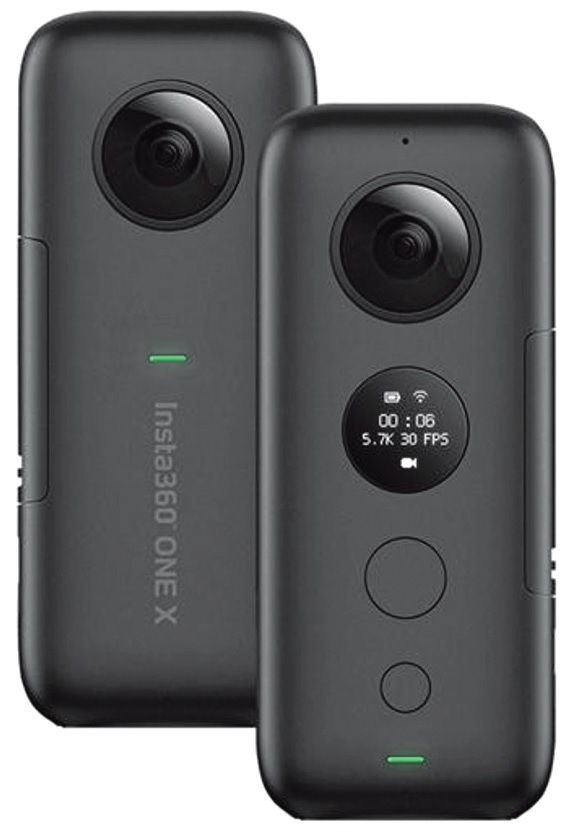 With a bundle of features, the Insta360 One X is an action camera capable of recording 5.7K spherical video and 18MP still images that can be exported in non-360 frames. To achieve this, it is equipped with dual 200° ultra wide fisheye lenses.

Want to make a picture of yourself, but don’t want that tacky selfie stick in the frame? The camera’s blind spot keeps it hidden. Want to race down a hill and capture every moment clearly and smoothly? The FlowState stabilisation feature has got your back.

The device records 5.7K video at 30fps, and can also manage 4K footage at 50fps or 3K at 100fps, for smooth motion in action videos, and slow-motion effects. Time-shift and Cinematic Slow-Mo features allow you to speed-up or slow-down moments in a completed video. For still images, one can activate HDR, and also record moments in RAW format. The option for a self-timer is also available.

There is a dedicated One X app that allows users to transfer, edit and share videos and images. It enables one to view and export images in various formats, like 360° fisheye, crystal ball, or tiny planet. The app locates the camera through Bluetooth, then automatically connects to its WiFi network. The camera can be connected to mobile devices through WiFi or a supplied USB cable. This allows one to operate it using the app, which also gives control over variables such as ISO, exposure compensation, white balance and shutterspeed.

Although the One X is not waterproof, there is a waterproof housing you can buy for it. Other accessories include a dart-like mount that can be flung along with the camera, and a selfie stick that can also be used to take ‘bullet time’ shots, where you have to swing the device around your head.

It is worth noting that the One X is also capable of livestreaming. And for those who prefer to colour correct what they’ve captured in post-production, log recording is available. 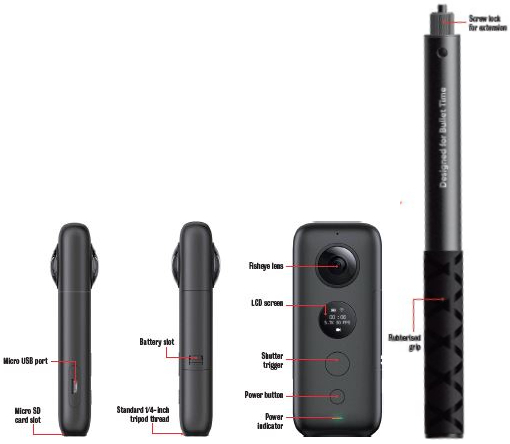 With a length of 115mm and a weight of 115g, the One X is fairly compact and lightweight. Needless to say, it could comfortably sit in one’s palm or pocket. Its tall frame with rounded-off edges houses a no-frills monochrome LCD which displays basic information like the shooting mode and battery life. This makes it essential to download the companion app so that you can see what you’re recording, an aspect you wouldn’t need to fuss about with a GoPro.

Basic operations with the One X are pretty straightforward since it has just two circular buttons. While the larger one triggers the shutter, and can be used to confirm options while navigating the menu, the smaller of the two is utilised for maneuvering through the settings, and for switching the power on and off. The menu itself is displayed on a small LCD display above the buttons.

Along with a MicroSD card slot, a standard tripod mount is present at the bottom of the camera, which can be used to attach various accessories. There’s also a Micro USB port on one side and a battery door on the other.

The company’s desktop editing software for 360° visual media allows you to export the image/ video in various formats, which means you can shoot first, and then think about what it should look like later. Photograph/Tanvi Dhulia

The camera delivers excellent video stabilisation in most situations. Its image quality is decent, and the auto-stitching ability is quite good. However, in objects close to the lens (like your hand holding the camera) the stitch line can be discerned. Furthermore, the battery life of the device is a little disappointing, but as it is removable, one has the option to replace it for longer shoots.

With its pocketable size and abundance of features, the Insta360 One X is an excellent companion for anyone with a penchant for adventure. A notable drawback is its price, especially considering that it is not waterproof. To use it underwater, one would have to buy a dive case, and the same goes for the selfie stick.

But a great advantage with the One X is that, for a frame, a user has different angles to choose from. This makes the camera far more accessible and versatile. One should also be aware that while the device itself is simple to operate, the companion app has somewhat of a learning curve.