Seeing in The Eye: On Photography and the Gaze

“If a photograph can inspire the sharing of personal stories from lived experiences—allowing for the intersection of emotional logics—perhaps it can play a key role in changing the gaze; in encouraging us to accept the stranger we are bound to become to ourselves when borders of differences are traversed.” 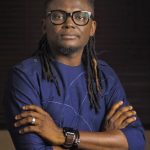 Emeka Okereke holds a Master’s degree from the École Nationale supérieure des Beaux-Arts de Paris, France, and has exhibited in biennales and art festivals in cities, across the world. Okereke is the Founder and Artistic Director of Invisible Borders Trans-African Project, and has also served as a visiting lecturer in several art platforms and learning institutions.

During my preoccupation with borders, movement and all the various forms of differences they presuppose, I have more often than not encountered the question: how can imagery (and by extension photography) play a useful role in the restitution of our world towards more conscious and correlational human relationships? As an attempt to reflect on this question, I would like to begin with a quote from Toni Morrison’s The Origin of Others… “The danger of identifying with a stranger is the possibility of becoming a stranger. To lose one’s racialised rank is to lose one’s own valued and enshrined difference.” It would seem, at first glance, that it is a quote about reciprocity. Yes. There is that, yet it goes even further. It is a quote about affecting the gaze. Thus I would, for the purpose of my reflection, argue that everything begins with the gaze, affects the gaze and naturally, the effect reciprocates.

In the language of the Igbo people of Nigeria (that I belong to and speak as my mother tongue), the gaze is central to the concept and definition of love. As such, the word love loosely translates to “see in the eye”. Here, we return to imagery. To see in the eye is to arrest and retain an image by which someone or something is recognised and given a place in the society. The image made through “in the eye” is preceded by a societal construct that allows for easy categorisations and definitions of affiliations. Yet, the double bind here is that while the gaze is connected to a societal hegemony, for which unique identity is oftentimes implied, it is by the same token, personal—a function of “one’s own valued and enshrined difference.” It is this claim and subsequent clinging to ownership of difference that often constitutes the elephant in the room of human interactions; that makes “seeing in the eye” devoid of mutual sharing: a “seeing past the eye”.

Since 2009, I have taken part in and presided over a project called the Invisible Borders Trans-African Project. The core aim of the project is to assemble African artists—mainly photographers, writers and filmmakers—to engage the question of borders and imposed cartographies, within the context of the 54 African States making up the continent. Central to our exploration is how imagery can be potently deployed for critical thinking, mediation, conversations around the complex realities of peoples, places and histories of Africa, which for many years, have been summarised, flattened or romanticised to the sole advantage of those looking from the outside. Our engagement has equally extended beyond the African continent to address, in broader terms, how spaces of differences are reinforced; how borders are, in the real sense, shadows or the negative precipitate of the hard lines of differences. We do this through our annual Trans-African Road Trips where artists live and travel together across borders, while producing thoughts and artistic works inspired by the everyday encounters on the road. 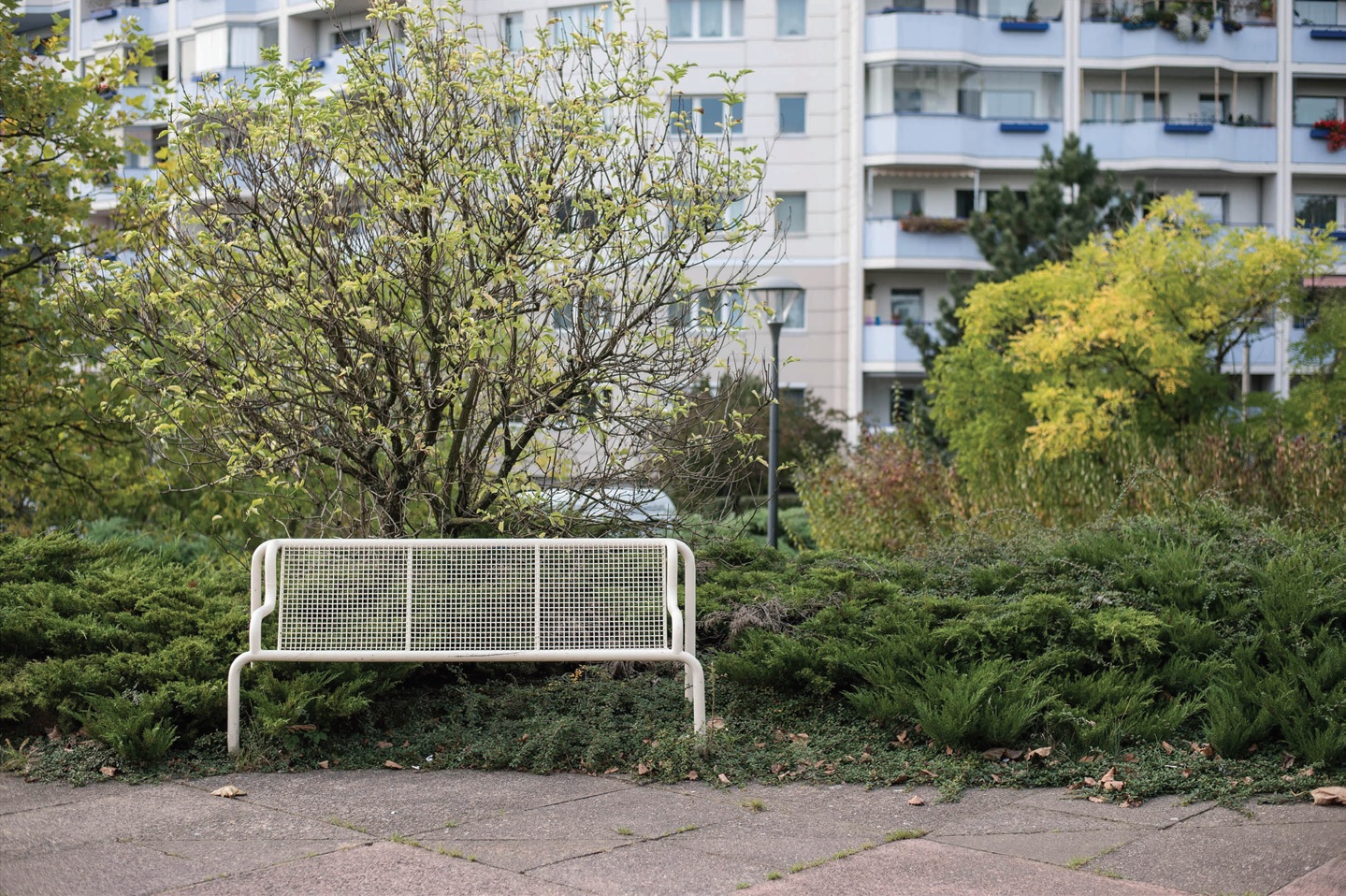 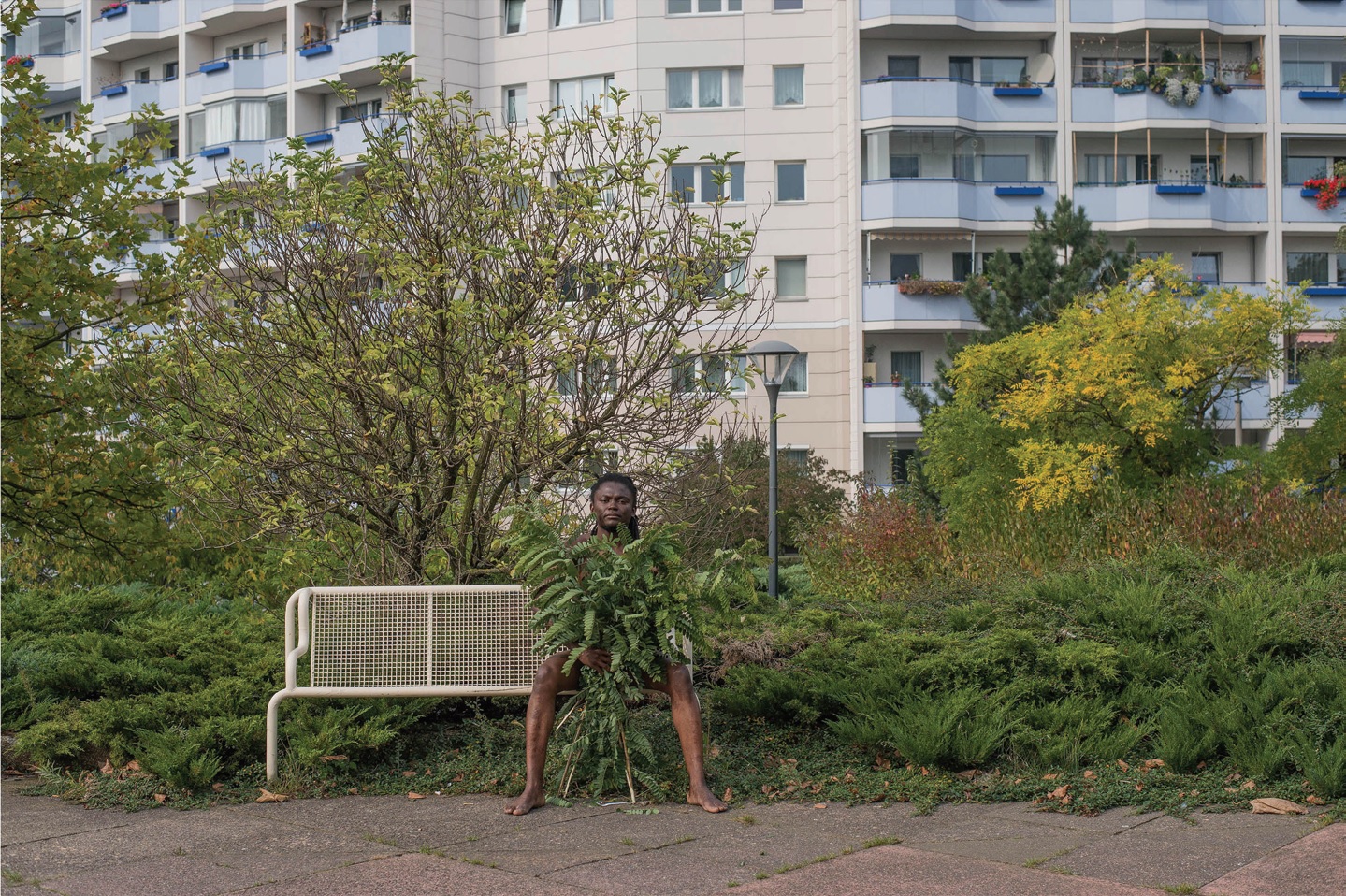 In 2014, during the fifth edition of the road trip project, which was the first-ever transcontinental one, we travelled from Lagos in Nigeria, to Sarajevo in Bosnia and Herzegovina, for a period of 181 days. I recall our stop in Berlin. We chose as our area of intervention, the suburban district of Marzahn—a former GDR district, which continues to retain many of its peculiarities, and for that, is a no-go area, even for Berliners. By this time, the political climate in Germany, as we know it today, was coming into full force. By popular opinion, Marzahn is a place you don’t go if you identify as a migrant or foreigner in any form. I opted to make a photograph, which at the same time, was a public space intervention.

This photograph took as a motif one of the outside benches situated in a recreational square. These benches have been nicknamed “EU benches” owing to the fact that they were sponsored by the European Union, as a way of encouraging social interaction in Marzahn. This photograph, a self-portrait, has me sitting on the bench, without clothes or anything on, except for a bunch of green shrubs (another important motif of Marzahn stemming from EU’s gentrification efforts) to lend a sparse sense of privacy. This photograph would eventually become an object of passionate discussion during our presentation convened in Marzahn. The atmosphere in the room was at first tense, as one would expect of any space where differences are addressed. But soon after, this gave way to exchanges about our presence in Marzahn. Experiences and stories were shared by the audience, many of whom were from Marzahn, with some others from Berlin.

If a photograph can inspire the sharing of personal stories from lived experiences—allowing for the intersection of emotional logics—perhaps it can play a key role in changing the gaze; in encouraging us to accept the stranger we are bound to become to ourselves, when borders of differences are traversed.