“If you want to know what someone fears losing, watch what they photograph.” Such simple, yet profound words that have been unknown to me, until now. What a time to even discover it, where I feel like I am surrounded by a certain impending doom.

I’ve always thought about what I photograph as a documentation of the things that have piqued my curiosity, or have delighted me by their existence. Even when things weren’t okay, it was those hours that I spent walking and seeing, that reassured me of a better tomorrow. But until now, it had never occurred to me that my pictures could also be the antithesis of the things that I love the most.

I recently received crushing news. Schmoo (my cat) was diagnosed with a chronic kidney condition, along with several other complications. Since the diagnosis, she has completely withdrawn from food. Instead, she has retreated to various corners of the house that are otherwise seldom visited. She spends the entire day biding her time. For what, I’m not sure.

Over the years that we’ve known one another, Schmoo has been a friend, my family, even a spectator, to all that has transpired in our apartment. The nature of our relationship is one that’s based on love and tolerance (sometimes, we can’t stand the sight of each other). She’s always been a permanent fixture, and up until now, showed no signs of ever forsaking this role. But the timing right now is such, where I am forced (albeit reluctantly) to consider a future with her absence. My instinctive reaction was to dig up all the photographs and videos that I ever made of her. It was striking to see how differently I felt about them now, comparable to an indescribable sadness. I continue to be surprised at how photographs can make us feel different things at different points in time. And how their meaning changes, as we grow older and view them with newer experiences. 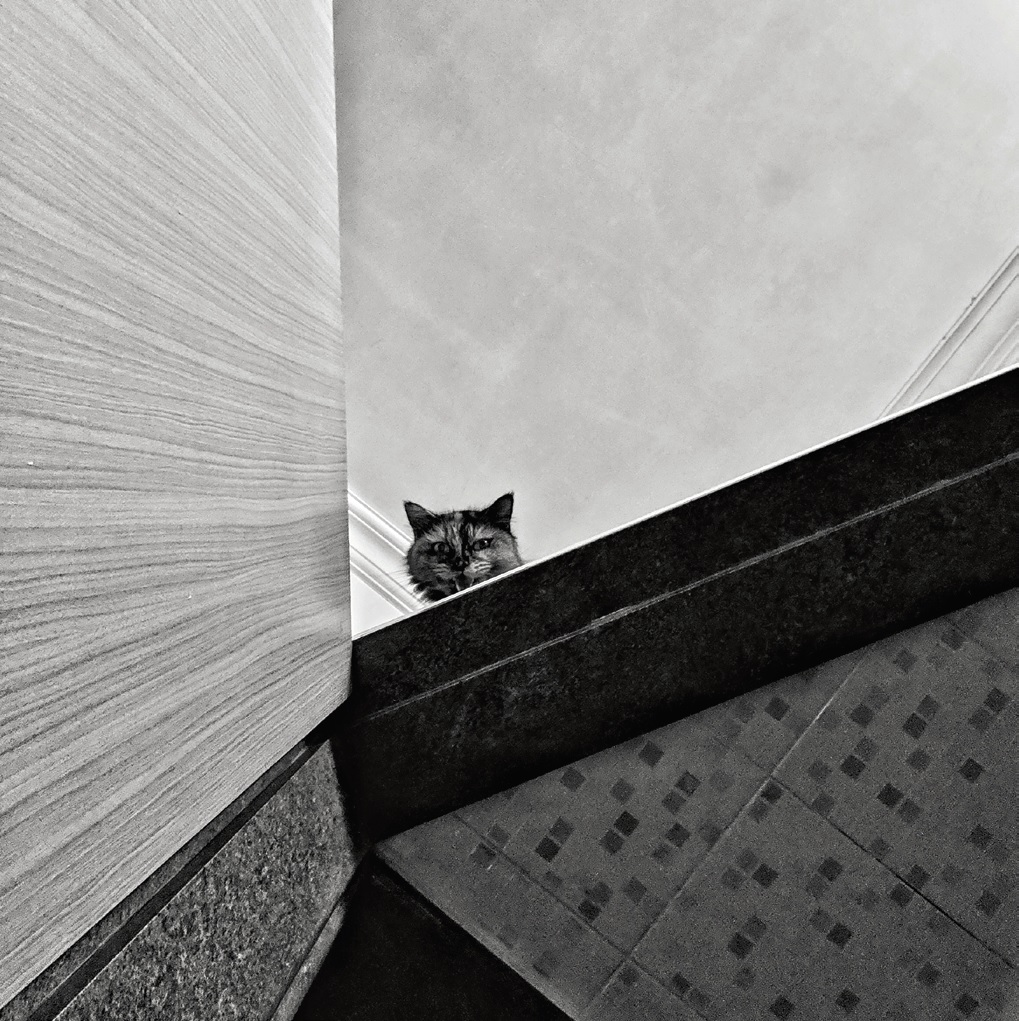 This photograph of Schmoo was shot by me, exactly four days before her diagnosis. What appears to be a snarl, is in fact a loud meow, directed at a pack of her favourite food that I was dangling at her, from below. Its agonising to see her lose her endurance, and the incredible love that she had for food.

Although I have made several pictures of Schmoo, over the years, I feel, now, this incredible urgency to photograph her constantly. I suppose this is what fear, the fear of loss, does to you. It makes you frantic, even a little irrational. It almost feels like an apology for all the times that I thought that there would be another opportunity.

Even though she’s always in my thoughts, I don’t want to just rely on my memories of her. The thing about memories is that they’re imperfect. They fade, and gradually become what we want them to be. I’ve also experienced how constant reminiscing can lead to a denial of the present. So by photographing or documenting Schmoo, I want it to be a means, for me, to confront and accept the fact of her illness.

I know this reads like I have succumbed to a fatalistic eventuality. But it’s not. A part of me knows that she’ll eventually recover, but I am not sure if she’ll ever be the version of herself that I’ve always known and loved. I don’t know what these photographs that I’ve been making of her, on my phone, will eventually reveal. I don’t know what the instant film that I’ve just purchased, will expose. What I am hoping to do is document a progression, one that hopefully leads to a not so distant future, where she’s around me, like she has always been, in our tiny apartment.