Lessons From a Blind Photographer

Pete Eckert, invited me to spend a day in a studio where he was at work. The shooting space was as lightless as the darkest night. For Eckert, of course, that’s a familiar place. Absolute black is Eckert’s everyday life. It is where he makes his photographs. He is one of the world’s most accomplished blind photographers.

Eckert arrived with a camera, a model, and a trunk full of flashlights and colored gels. But most importantly, he brought a mind full of inner visions. Watching a blind photographer is a revelation. It carries life-changing lessons for every photographer, especially for all us sighted photographers who have been blinded by our sight. It might even open our eyes.

The studio in which he was working was a legendary one in Los Angeles. The hallways are lined with photographs made there over the years: Marilyn Monroe, Jack Nicholson, Arnold Schwarzenegger, Denzel Washington, Madonna.

He placed his Toyo 4x5in view camera on a tripod. He set the aperture at f/22. The bellows rail is specially notched so he can precisely focus by touch. He paced off distances and positioned the model, Mary Dignan, a friend of his. Dignan is a lawyer and artist who is both blind and deaf. Eckert describes her as so determined that she can “eat nails and spit bullets.” In 2014, she spent almost three months teaching art at the Mathru School for the Blind in Bengaluru. The photograph he makes is titled Slipstream.

Each of Pete Eckert’s photographs begins as a mental construction. He creates a fully imagined photograph in his mind’s eye. Then he uses a camera to bring that inner vision into the world of the sighted. “I slip photos under the door from the world of the blind to be viewed in the light of the sighted,” he told me. Every image is an elaborately realised internal visualisation first, a photograph second. 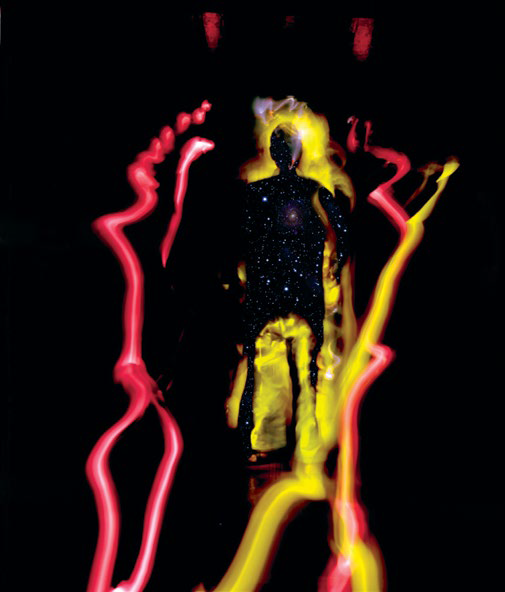 Eckert double checks with studio assistants: “Is the shooting space totally dark?” He calls to his model, “Are you ready?” Then he trips the camera shutter and locks it open. For the next fifteen minutes, the photographer roams the dark studio, painting with light.

A photograph, of course, is the record of a scene before the camera. But with Pete Eckert, it captures more—the artist’s gestures, the passage of time, the realisation of a visual idea, and the outward manifestation of a purely inner mode of seeing.

I stand in the black background and watch him work. With the camera shutter open, Eckert moves through the darkness deploying his lights to build the image he sees in his mind. “I use any light source I can understand,” he says. His palette includes flashlights, candles, lasers, lighters, even a blaze of ignited black powder. The lights swirl like a carnival ride. The photographer does a smooth dance around his model, building up the photograph.

It is poignant that Eckert will never see the wonderful photograph he is making, and he gets frequent questions about this fact. Why create photographs you will never see? But he turns the question on its head. Eckert points out to sighted viewers… that they must make do with just photographs. And that they will never get to see the images as they form in his mind, as they are meant to be.

Eckert’s photograph of Mary Dignan conveys careful thinking and specific messages. Her figure is full length because “we all view ourselves as whole individuals.” The yellow glow enclosing her head represents the barrier of blindness. The slipstream flow of yellow and red light reflects “the close-at-hand world that must be felt by touch, by the deaf blind.” But the inner starscape signifies the boundlessness of imagination and of the self. And the entire galaxy at her heart. Pete Eckert does not see limitation. He sees possibilities as wide as the universe.

Of course, a blind person making photographs is a radical act. By releasing the shutter, the blind lay claim to the visual world. “I’m a very visual person, I just can’t see,” says Eckert. These photographs also force a re-evaluation of commonplace ideas about sight, blindness, and photography. Sighted photographers live in a swirl of images, but has the modern barrage of visual clichés swept away our originality? Has our insistent sight and the current visual pollution overcome our vision? In the end, who is sighted and who is blind? Blind photographers offer a deep lesson for all photographers. They demonstrate that there is a crucial difference between mere outward sight and true inner vision. Great photographs, we are reminded, are not a product of the eyes, but of the mind.

Douglas McCulloh is a photographer who exhibits internationally. He is curator of ‘Sight Unseen’, the first major museum exhibition of work by blind photographers, and is one of six artists who created ‘The Great Picture’, the largest photograph ever made.

This article originally appeared in the June 2015 issue of Better Photography.