K Madhavan Pillai: Reflections on Japan and on the Canon Way of Doing Things K Madhavan Pillai discovers why some of the world’s biggest brands, including Canon, are Japanese, and how Canon has harnessed the meaning of kyosei as its global philosophy.

Over the years, if there is one country that has contributed to more brands becoming household names in India, in the sphere of photography, it has been Japan. For a long time now, I have been fond of Japanese art, management styles, work ethics, mannerisms and food. So when I was invited by Canon to witness some of their very latest technology and visit their factories, at the back of my mind, my agenda was to discover more about the attitudes and culture that has made this little country almost synonymous with our existence as photographers. I was quite taken aback when I was asked to write the name of Fujio Mitarai (legendary for the ‘Mitarai Way’ of management, the 81-year-old Chairman and CEO of Canon Inc. is also instrumental in shaping Japan’s corporate global vision) as my sponsor on my visa documents. 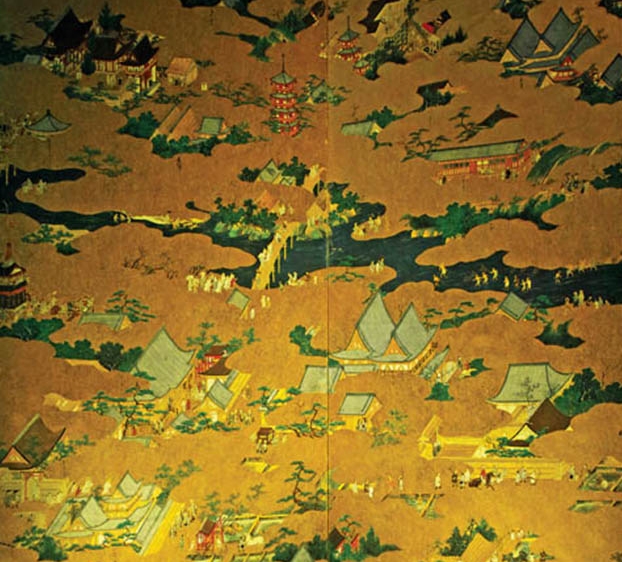 The Tsuzuri Project (initiated in 2007) aims to pass on Japanese art and culture to future generations by producing high-resolution and exact facsimiles of precious cultural assets, such as decorative folding screens and sliding door paintings from Japanese antiquity, both from within Japan and around the world. It is done by combining traditional and new processes. This enables the original artworks to be preserved in a controlled environment, while the facsimiles are displayed to the public and used for educational purposes. So far, Canon has reproduced 56 antique art pieces. A Canon EOS 5D Mark III DSLR is used to capture details of the delicate antique. Using a special tripod head, it is methodically shot in multiple segments and later recombined into a single, high resolution image.

As a part of Canon’s strategy, R&D and the manufacture of components happen in-house. There is a focus on innovation. For instance, Canon has recently developed a 250MP sensor, showcased a functional 8k Cinema EOS prototype, and 8k monitors as well. At the moment, because no commercially available technology can record, transfer, transmit or display 8k data (which can be in the range of a gigabyte per second), Canon is working with various Japanese associations to come up with worlwide standards for 8k. 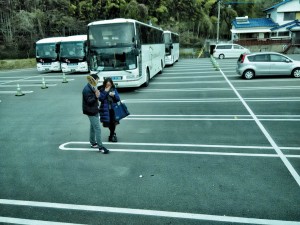 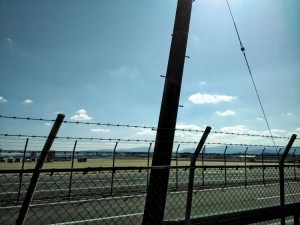 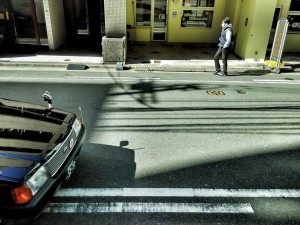 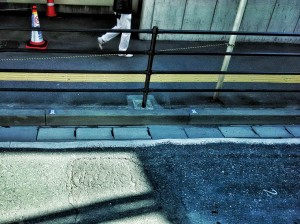 There is a history of being precise in Japan, to the point that it has developed into an almost intuitive sense, seen in their arts and daily life. The Japanese also happen to among the most polite and observant people in the world. While wandering around Tokyo one evening, I happened to inadvertently walk into an ikebana class in progress. I was cordially invited to watch. In complete silence, practitioners carefully placed single stems into a vase at exact angles. On another occasion, road workers were quite amused to find me and Shridhar (Better Photography’s Deputy Editor—Technical) watch intently as they immaculately repaired a pothole, and photographed it for documentary reference. 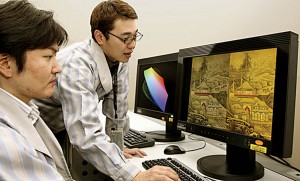 Canon’s proprietary colour matching methods are used along with lighting data from the shooting environment. To ensure that the colours are a perfect match and to ensure the safety of the antique, the print is made on the spot. 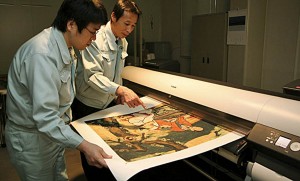 Large format inkjet printers along with specially made washi (Japanese paper made from plant fibre) and kempon (silk paper) are used. Apart from print longevity and quality, the papers are optimised for applying gold leaf. 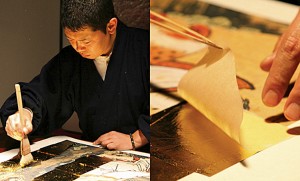 The use of gold foil, paint and isinglass techniques make these pieces of art unique. Gold is applied by a rare, traditionally skilled craftsman by hand. A special ageing process to is used to make the artwork look old. 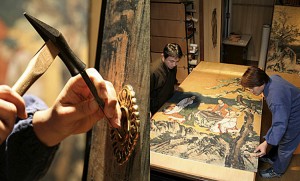 The screen is finally mounted on a frame that is delicately handmade to be absolutely identical in appearrance and quality as the origina. Special attention is paid to make the fittings and the backing fabric look old.

Be it the food, prepared and presented beautifully, at the smallest sushi restaurant, the examination and delicate pruning of a garden tree with a pair of tiny scissors, or the extremely high tech, careful assembling and testing of Canon’s flagship DSLR, the EOS 1D X Mark II in their huge factory at Oita, I realised that, for the Japanese, work is a philosophy and a reward on its own, just as photography is for a lot of us. In a culture with intricately interwoven contrasts, two things have been passed down through the centuries—an unflinching dedication to a chosen profession for life, and arriving at the most direct and logical solutions, however complex the situation. 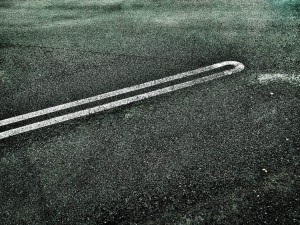 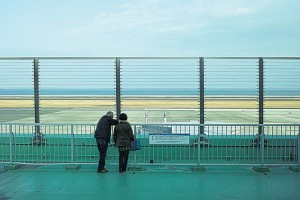 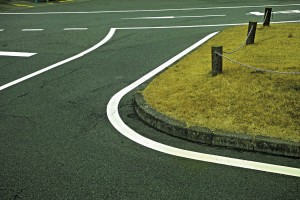 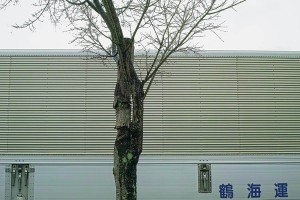 “To my eye, the streets of Japan show a certain artistry and neatness, the easy randomness of which I think comes from being meticulous, as a culture.”

There is a cyclical nature to this as well, and I noticed it during interactions with factory workers and supervisors at Oita. While there exists a hierarchy, solutions to issues are sought from employees working closest to the source. And since most people in Japan remain employed for life with the same organisations, companies dedicate significant resources to their training, growth and welfare. If I were to point to a singular factor for the success of companies in Japan, this is it. Now apply this to an individual, organisational, national and global level, and you have the basic workings of kyosei, a Japanese word which has been Canon’s corporate philosophy since 1978. In essence, it means ‘in cooperation with all’. Canon’s version that I keep reading in their headquarters in New Delhi is ‘living and working for the common good’. 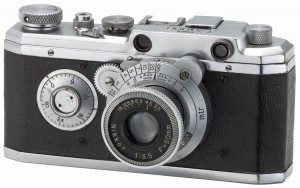 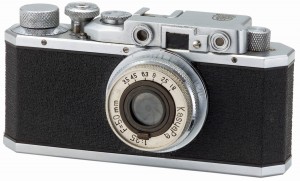 The very first Canon camera, the Kwanon (1934), was so named after the Buddhist goddess of mercy. The logo on Kwanon was a many-armed goddess seated on a lotus, much like the goddess Laksmi, a Hindu diety.

The corporate kyosei followed by Canon stresses on five stages, with the success of each stage depending on the value and strengths brought in by the stage preceding it. Simply put, these stages are-economic survival, cooperation with workers and executives, cooperation with partners outside the company, global outreach and cooperation therein, and finally, engaging with governments to solve problems related to supply chain, trade deficits, etc. While Canon Inc., Japan, operates at all five levels, from what I see, Canon India has just begun to operate at stage three. As a photographer and Chief Editor, I have often been asked by students of the subject for a path ahead for financial and personal success. In this, the practice of photography, is not unlike having a corporate vision. If the spirit of kyosei has served Canon admirably well, taking the company to new heights and through difficult times, it can just as easily be the photographic kyosei way to success too. 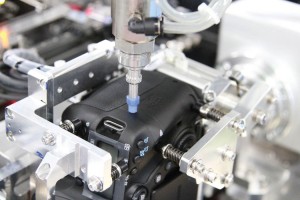 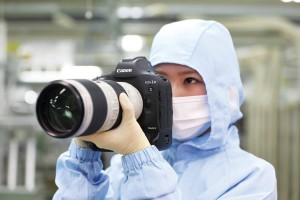 “A walk through of Canon’s highly automated factory at Oita displays the level of care, precision and control over quality needed to produce the smallest components to the finished product.”