A Tryst With The Wild Usually, lions do not like water, but in the Okavanago Delta Area in South Africa, they have to cross a number of springs and streams to hunt for prey. Photograph/Kunj Trivedi

Kunj Trivedi’s love for wildlife and his passion to immortalise that one moment of action in his frame is what makes his images spectacular. Neha Mutreja speaks to him and finds out about his quest for perfection.

When I first met Kunj Trivedi at his exhibition titled Through My Lens in Mumbai, I remember him saying “wildlife photography is all about disappointments.” This simple yet insightful statement had me curious about Kunj as a wildlife photographer. I thought to myself… here is a man who knows what this genre of photography entails, accepts it humbly and yet brings back some spellbinding images. At his exhibition, everyone from kids to adults had something to say about the huge prints—educational, awe inspiring, experiential… all at the same time. I was very motivated to find out more about the rather reclusive Kunj bhai. So, one rainy morning I reached his apartment, which is situated in one of the plush localities of Mumbai. I found him working on his laptop—viewing and processing recently-shot photographs. Seeing him engrossed in his work, early in the morning, I sensed how passionate he is about what he does. This is evident in his photographs too. There is a certain quality to them. They either leaves you in awe or grow on you slowly, making you wonder how he managed to get the shot. Each of them have their own individual stories. I wanted to hear about them, one by one.

Working From Nine to Nine
While most of us consider retirement as a dormant phase of our lives, Kunj bhai decided to take up photography after partially retiring from his work. Today, he dedicates most of his time and energy to his passion. “I am a retired man, but I work from nine to nine. My day starts with studying, seeing, segregating and processing my images. Sometimes I dedicate more than 12 hours to this.” It is evident that his keen interest in the subject is what keeps him going. But why was it that he never took up photography earlier in his life?

The Road to Photography

It dates back to his first school trip to the famous Serengeti National Park, Tanzania, in Africa in 1945. He reminisces, “We were transported to the park in a World War II military truck. After an action-packed day, I spent the night sleeping at the back of the truck, listening to deafening roars of lions amidst the sounds of an African night. It was an amazing experience. It always remained at the back of my mind.” As the years passed, his studies kept him occupied. He opted to graduate in the field of commerce and went on tobecome a Charted Accountant. His busy schedule hardly gave him time to practice photography. But family trips to National Parks in Africa pushed him closer to nature. “Most of our business was with African countries. This gave me many chances to visit several natural reserves.” During his stay in Kenya, he made it a point to make regular trips to the Taso National Park on holidays. Though dormant, the foundations for his passion were being laid even while he was engaged in business.

A Kick Start
As I continued to hear his story, it reminded me of the scientific term ‘latent heat’. It is the hidden heat in a water molecule, which cannot be felt or seen, but which holds a lot of energy. Though Kunj bhai started out with photography quite late in life, his hidden talents simmered over the years, without him knowing it. It was in 1992, at the age of 63, that he wholly dedicated himself to photography. During this time he took up several tours to national parks, shooting with both still and video cameras. “I used to shoot and take videos, but gradually I realised that managing the two was a compromise. So I shifted my focus towards still photography. And as I took more pictures, I found myself deeply involved.” Once in the wild, it was as though the land beckoned to him. Tough conditions became a way of life. He quickly adapted to the great outdoors, extreme weather and difficult terrain.

An Affinity for Cats
With time, Kunj also realised that he had a special affinity towards the big cats. “Tigers, leopards, cheetahs… I am always interested in animals in action. Watching them is an absolute pleasure. Capturing the action is absolutely challenging.”He adds, “During our family trips to reserves, if I saw a leopard, I used to wait for the right moment. The scorching sun never bothered me. All I wanted was to get the perfect shot. If you are passionate about something, everything else becomes unimportant.”

A Quest for Perfection
Keen observation, an eye for detail and eye-hand-mind co-ordination are some of the things that he has carried forward from his professional life. It is something that is evident from his working style. “I do not like clutter in my frames. I like to work with a clear and straight-forward approach. I have a temperament of sticking to what I take up. Then I work towards honing my skills,” explains Kunj bhai. His love for perfection is also seen in the way he catalogues all his images. After every shoot he segregates and tags his images. If he is unsure of the species of some animal, he makes it a point to look through books, consult experts or search on the internet. Over the years Kunj bhai has polished his skills—first by trying to get technically correct pictures, and later developing his own distinctive style. By his own admission, he is his own staunch critic. “I come back from shoots and see my photographs. I look for flaws, which most of my images tend to have. Then I try to avoid those same mistakes again. For example, I had a problem with getting sharp pictures earlier. Nowadays, unless I get the whiskers of a tiger perfectly sharp, I am not satisfied.”

The Challenges of Wildlife Photography
Like any profession, photography has its challenges. Like any passion, it has its moments of satisfaction and disappointment. “There have been many instances when I spent a lot of money on safaris and guides, without a single good picture to show for it. It is more frustrating when you are not at the right place when the action happens. These are things that you need to accept in wildlife photography. You have to brace yourself for failure. What keeps me going back for more is the sheer joy of watching these animals. Then I tell myself… I just have to have it!”

He believes that luck plays a role as well. However, more than luck, single mindedness and perseverance are most important factors for good wildlife photography. “It is difficult to pursue this type of photography. Shooting from a covered car or sitting on a constantly moving elephant poses its own challenges. Hours of wait, scorching heat and hundreds of flies make it seem like an impossible task. But you forget all this if you get a great shot,” he states.

On Being Socially Responsible
Though Kunj bhai enjoys almost all forms of wildlife, he is most fascinated by the big cats. “Very soon, possibly in my lifetime, some of these species will become extinct. I prefer to do my bit by photographing them and then holding exhibitions instead of associating myself with any conservation project. I believe that instead of forcing people to conserve, they need to do it because they wish to preserve something for a little while longer. All of us, including the government, will have to join hands to preserve nature,” he says. Kunj bhai’s son summed up his father’s spirit aptly. “While the rest of us were hot, hungry and tired after hours in the blistering heat and sun, he would be urging us on. All we wanted to do was to get into the cool comfort of the lodge. As usual, he would persuade us to wait. More often than not, we would be rewarded with a truly memorable and spectacular sight. He just knew that we had to wait for it to happen.” 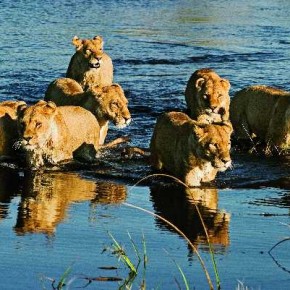 Usually, lions do not like water, but in the Okavanago Delta Area in South Africa, they have to cross a number of springs and streams to hunt for prey. Photograph/Kunj Trivedi 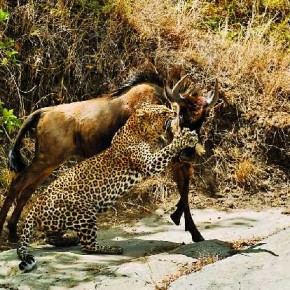 Shot in Masai Mara Reserve in Kenya, this image shows a leopard attacking a group of Wildebeest who had come there to drink water. Photograph/Kunj Trivedi 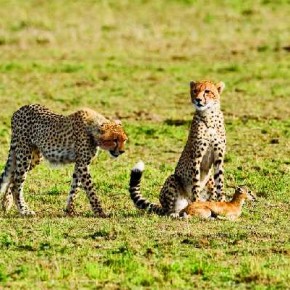 In this image, Trivedi has shot a leopard that has gone with its cubs to catch a baby fawn. This shows how leopard train their cubs to learn the art of hunting.Photograph/Kunj Trivedi 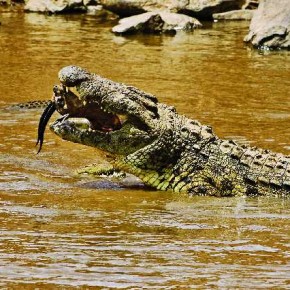 Trivedi has captured the attack of a crocodile that took place when the animals were migrating from Serengeti National Park, Tanzania to Kenya’s Masai Mara. Photograph/Kunj Trivedi 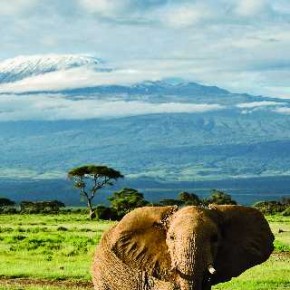 Trivedi photographed this elephant in front of the spectacular view of Mount Kilimanjaro, the highest free standing mountain in the world, at Amboseli National Park, Kenya. Photograph/Kunj Trivedi 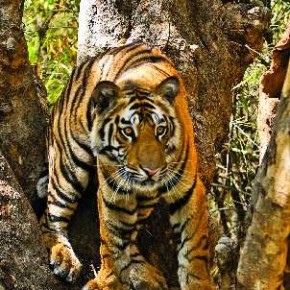 Tigers do not climb trees, but cubs do it from time to time. This image was taken in Bandhavgarh Tiger Reserve in Madhya Pradesh. Photograph/Kunj Trivedi 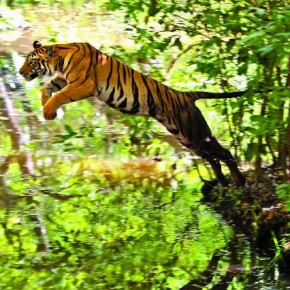 This is a rare wildlife moment that Trivedi has captured, of a tiger that is just about to jump across the water. Photograph/Kunj Trivedi 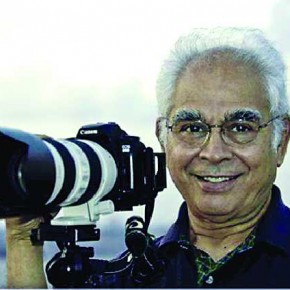