Mustafa does not think that he has ever had a diffi cult project. However, he did mention one physically daunting situation, when he had to walk for days and even climb a mountain to reach a Maoist camp in Chhattisgarh. Photograph/Mustafa Quraishi

From a celebrity photographer to being a seasoned photojournalist, Mustafa Quraishi has come a long way. Conchita Fernandes takes you through his journey. When he was a young boy, Mustafa Quraishi dreamt about piloting army helicopters. However, a failed medical examination because of a broken elbow made this impossible. His mother Humra Quraishi, who is also a journalist, suggested that he spend some time with photographer K K Lashkar from The Times of India. The time spent with Lashkar out in the field allowed him to recognise how much he enjoyed photography. This was his beginning. During his second year in college, The Indian Express offered him a job as a photographer and in his own words, “the rest was history.”

The exhilarating Glamour
In the nascent years of his career, Mustafa spent a considerable amount of time photographing celebrities and high-profile social gatherings. Even at the time, the term ‘Page 3’ carried the tag of being frivolous. He says, “other photographers didn’t think that it was photography, because of the late nights, early mornings and drunk and abusive people. But for me, it was a great thrill.” His Page 3 photography days made me wonder about how a photographer can go from something so glamorous and superficial to covering important political issues that are their polar opposite. Before his first trip to Afghanistan, he asked his journalist friends what they wanted to see from the country. They said that they wanted to look at photos of the youth and the everyday Afghan life. “But when you see abject poverty and helplessness, it becomes difficult to ignore them.” Photograph/Mustafa Quraishi

“I don’t have a role model. Being a good human being and a photographer is what inspires me the most.”

A Life Changing Opportunity
Although he enjoyed his time at The Indian Express, he eventually got too comfortable and complacent. He realised that he had to move on. He wasn’t seeking a job, but photographer Gurinder Osan from The Associated Press asked him to submit his photos to the agency.With a photography background that was completely disassociated from
photojournalism, Mustafa was surprised when AP asked him to travel to Andhra Pradesh to document the Naxal community. This would be his stepping stone in the field of photojournalism. “They wanted me to cover the state independently without having any reporters spoonfeeding me their story ideas. It was just like covering a foreign
country, with a foreign language.”

Discovering Humanity
“When I was sent to Hyderabad in 2004, the Naxalite movement had become huge in the state.” Mustafa’s first encounter with the group was when he accompanied a few journalists to the Nallamala forests. “It was an eerily exciting trip by road, on foot and then by boat. It was strangely thrilling to be marooned on an island accompanied by heavy downpour, along with the looming threat of a police raid and encounter.”

Here, he met a variety of Naxals of all ages, belonging to different professions. “Though most of the Naxals knew why they had joined the movement, I met a 17-year-old girl called Laxmi, who, in broken Hindi requested me to teach her Hindi and take her away from the place.” This entire experience led to a long term project at understanding who the cadre were and why they decided to join the movement. Similarly, Mustafa has also ventured into the core of the Maoist community in Chhattisgarh. There are only a handful of photographers who have been able to delve into the layers of secrecy surrounding both the Maoist and Naxalite communities. With the help of his photographs, he has been able to bring forth a rather different aspect of their lives—one where we don’t just see the groups training or in battle, but visuals of subtle moments from their private lives. Mustafa does not have a set idea about how he wants his photographs to look like or what he wants from them. Instead, he lets his pictures develop as the day goes by. Photograph/Mustafa Quraishi

“I used to carry my camera everywhere. I felt totally insecure without it, because I didn’t want to miss a breaking news picture.”

The Thrill of Uncertainties
In the 10 years that he spent with AP, Mustafa was present at the centre of several important and volatile moments. For instance, right after Osama Bin Laden was killed, he was sent to Kabul to be on standby to photograph any violence. He recalls the place being completely on edge and a visible tension was felt in everyone he spoke to. To add to the unstable situation, his two-week stint there turned into two months. “At one point, I remember calling up my mother and telling her that I didn’t want to die so soon.”

During his Page 3 days, he recollects being beaten up over a dozen times and even faced a legal issue with a Bollywood actor, all in the name of getting the best photograph. And then there were nights where he slept with the lights switched on, because he could not get rid of the mental image of an Afghan boy who had lost his legs to an explosive device.

This is what makes Mustafa one of the few photographers who can seamlessly alternate between issues ranging in varying levels of intensity. Depending on a photographer’s approach, a controversial subject can either be glorified or demonised. But Mustafa’s impartial, yet sensitive vision has helped him tread this very fine line.

About Mustafa Quereshi
He admires the work of photographers like Kevin Frayer, Gurinder Osan and Anja Niedringhaus. His work has been featured in several publications like The New York Times, Newsweek and The International Herald Tribune.

You can view Mustafa’s photographs on his website www.mustafaquraishi.com 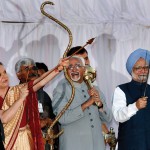 Quite a few of his photos are laden with mild threads of humour, a quality only a few photojournalists possess. Photograph/Mustafa Quraishi 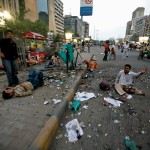 Under AP he was sent for hostile environment training. This enabled him to better handle tense situations like the 2008 Delhi bomb blasts. Photograph/Mustafa Quraishi 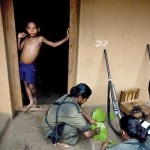 His photos from the Maoist region are not just depictions of their harsh realities. It gives us a rare look into their day-to-day activities. Photograph/Mustafa Quraishi 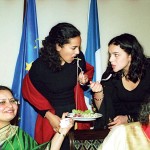 During a party, he had shown his Page 3 portfolio to the Editor of a leading magazine, who rubbished it. Later, the same magazine called him up to source his images. Photograph/Mustafa Quraishi 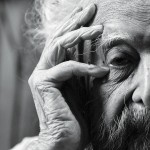 Mustafa’s and Khushwant Singh’s association goes back to about 17 years. Over the years he had created several portraits of the noted author, who passed away on March 20, 2014. Photo/Mustafa Quraishi