Thomas Sauvin: A Passage in Time Chinese women strike a pose for a beauty pageant, their outfits a melange of traditional Chinese clothing with western styling. Photograph/Thomas Sauvin Thomas Sauvin is a native of France with a home in Beijing. He is a collector and curator of negatives and photos. One of his photobooks, Until Death Do Us Part, was originally packaged in crowdsourced cigarette boxes, contributed by Chinese citizens.

Thomas Sauvin reopens a window into the history of Beijing with his collection of negatives that were once discarded and forgotten by the people of the city. In conversation with him, Aarushi Redij gets a glimpse into the memories of a culturally evolving China.

What do you feel when you look at old family photos? You shake off the dust, not just from the album, but from the thin veil that separates these memories from your conscious mind. But, if the images are of unfamiliar faces and unheard stories, what could make a person interested in the ordinary world of a stranger?

I was quite intrigued and perhaps even amused when I stumbled upon images of Chinese people posing with their refrigerators and televisions and a baby smoking a cigarette. My head was brimming with questions. I wondered how Beijing Silvermine, a project by Frenchman Thomas Sauvin, had become the keeper of a stunningly authentic memoir of Chinese history. The body of work, picture by picture, redefined my understanding of the people and history of China. China’s imagination was catured by the glamour and grandiose of western civilisation. Stage performaces with beautiful showgirls were often subjects of photographs. Photograph/Thomas Sauvin

Sauvin was a management student in Beijing, where he was introduced to photography. He spent a few years working at local photo festivals, gaining knowledge of contemporary works in the field. Soon, he was hired by the Archive of Modern Conflict (AMC) London to be their correspondent in China, for his knowledge of both modern photography and the local language. He spent many years collecting for AMC before his attention was diverted towards colloquial records and images. “Surrounded by photo material no one was interested in, it seemed like these images were ignored for their banality but perhaps, it is this very feature that caught my attention,” says Sauvin.

Positively Negative
He focused his energy on unravelling the history of Beijing, where he had lived for most of his adult life. His exploration of local bazaars and encounters with antiquarians left him with a burning question. What became of these discarded and damaged images, did they survive in their original state as negatives? What Sauvin was looking for weren’t iconic photographs or even images of a major landmark in history. They were photos of everyday life shot by ordinary Chinese citizens. “These negatives spoke of the China that they as a people had lived through, during the Cultural Revolution. This was an intriguing story to an outsider like me,” says he.

He set out to collect as many negatives as he could find in his hometown of Beijing, but every search yielded in one name, a person called Xiaoma. It seemed that the elusive man had been collecting these negatives for a long time. Fueled by curiosity, Sauvin contacted him only to realise that Xiaoma’s purpose behind purchasing the negatives was disturbingly naive… to extract silver nitrate from them. Aghast at the destruction, he was quick in purchasing kilos of negatives that were destined to be mined. Thus began his journey, creating the Beijing Silvermine.

Shaping the Silvermine
Over the next few years, Sauvin sieved through countless abandoned negatives before handpicking the ones to be scanned. Soon, his workshop in Beijing was crowded, with box upon box of carefully selected images. But he had no clue as to what he would make of them. The huge investment of money and time was like a ticking clock. He began to doubt the future of the project. Finally, after spending months going through the negatives, he struck gold amongst the silver. His mind began to recognise several recurring themes and he started putting similar pictures together. There were people posing with appliances, cliché pictures at popular destinations and many such exhilarating patterns. Finally, the loose ends seemed to tie themselves up.

Over time, he realised the importance of his work. He was creating a stunning repository of Chinese history that was not otherwise available to an outsider. While every photograph in the collection has its individual story to tell , Sauvin chose to overlook the same. “Rather than taking inspiration from one photo, I drew upon their larger cultural inferences. I hoped to tell a story that would have otherwise been lost. An all encompassing history of the Chinese people, as documented by the Chinese people,” says Sauvin. He did not want the magic of the larger story to be lost to single personal anecdotes. With cultural homogenising, people began to find ways to entertain themselves. Amusement parks, botanical gardens and foreign locations were favoured by the people. Photograph/Thomas Sauvin

Breaking Boundaries
He first exhibited the project in England in 2012, and it was received with surprise and fascination. Never before had the West seen images of China which were so differing from their common, myopic perceptions. It brought to light the reality of a demographic that was much like the rest of the changing world, grappling with the onslaught of a global, westernised culture. He then went on to exhibit the photographs in countries like Singapore and Hong Kong, but never ventured into mainland China itself, for he feared how they would perceive his exercise. Would they see it as an invasion into their private memories?

But soon enough, news of it reached China. To his surprise, the people loved Beijing Silvermine. It told their story as they collectively remembered it. “They appreciated its lack of propaganda, its simplicity and endearing moments,” says Sauvin. Encouraged by the positive response, he saw it as a way for him to give back to the community that he had been a part of, for so long.

The entire journey of creating the Silvermine, has opened up his mind to a different facet of China. It has allowed Sauvin to feel a sense of belonging, an opportunity that he feels, not many expats get. He intends to keep collecting such discarded negatives till there are none left to discover. “This project will probably bear witness to the death of analogue photography in China and will be a permanent record of it”, says Sauvin.

To view more from the Beijing Silvermine, visit www.instagram.com/beijing_silvermine/ 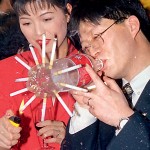 Sauvin stumbled upon an image of a bride lighting a cigarette for a guest, and posted it online. The response was extremely positive and so he revisited his archives to search for similiar images. It brings to light this custom that was once practised at Chinese weddings. Photograph/Thomas Sauvin 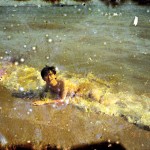 Such images of people leisurely bathing at the beach are very common. Even those who could not afford fancy vacations, found a means of recreation. Photograph/Thomas Sauvin 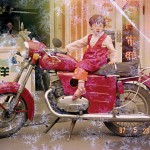 With the opening of the economy, people began purchasing electronics and machines. This was a novelty to them and they documented each new gadget in photographs with members of the family. Photograph/Thomas Sauvin 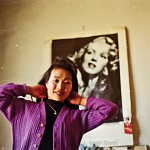 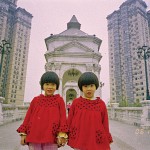 Chinese families with twins preferred to photograph them dressed in identical outfits. The resulting images invoked symmetry and were often quirky. Photograph/Thomas Sauvin 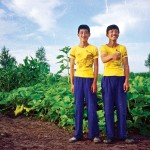