Philippe had to lean back and hold on to the wood, while the whole balcony floated on a watertight tank in a Hong Kong  harbour. Photograph/Philippe Ramette This article was originally published in November 2013.

When you first look at Philippe Ramette’s pictures, your jaw drops. You see a man in a suit, perched quite casually on the ledge of a cliff, strolling across a tree trunk, or even sitting upside down involved in intense thinking. All of this, with a seeming nonchalance.

After staring for a while, you then wonder if the images have been digitally manipulated. That is, until you look closely and notice his not-so-calm expression, his tense arms and his suit that looks slightly crumpled. It then dawns on you that there is something more to the picture.

Each photograph is conceptual and it is photographer Marc Domage who actually executes Philippe’s vision by releasing the shutter. The more time you spend observing this collaborative work, the more you begin to understand the irony and genius behind each photograph.

The Acrobat
Ramette’s images are highly conceptual and require a lot of preparation and an intense amount of physical endurance, a they require him to stand or sit or lie on metal harnesses fixed at impossible angles. To make his images, he had to design a harness that stays hidden in his suit. This harness is fixed firmly to the surface he wishes to hang from, to look as though he is walking up a tree, or hanging off a cliff, with a facial expression that signifies pondering. For his series Rational Exploration of the Undersea (2006), he had to train to dive and had to wear lead weights under his suit and on his ankles to weigh him down. A team of divers worked with him to execute his images. All of his images are conceptualised by Philippe, but the camera’s shutter is released by photographer Marc  Domage. Photograph/Philippe Ramette

Always an Artist
Even though he is passionate about photography, Philippe considers himself an artist first. “It was by a stroke of serendipity that I got into art school. It was in that moment that I knew for the first time in my life, that I had found my place. I am totally committed to art.”

His earlier work consisted of seemingly bizarre metal contraptions and wooden installations, which he made in the 90s. Photography, then, became a natural extension of his vision, as he saw it as a way to demonstrate the purpose of his sculptures. “All these practices are closely related. My photography work feeds my sculptures, my sculptures feed my drawings, my drawings feed my photographs. ”

The Contemplation
Philippe’s ideas can take root anywhere. The origins are layered, multiple and unpredictable. They may come in a dream like Balcon2, his favourite image, where he is in a balcony that is horizontally levitating off the surface of the water in a Hong Kong harbour. “This image was quite complicated and took a long time to achieve. It took me two years to conceptualise and execute this picture from a mere dream!” he said. Titled Gravity Reversal, Philippe hung upside down from the building with the help of a metal hook on his feet for this image. Photograph/Philippe Ramette

The Art of Laziness
Philippe “practises laziness” frequently as he believes it helps him to mediate and let free thoughts flow. He tries to bring out mundane moments with an infallible logic by staging and photographing every day moments like rationality, contemplation, irrationality and exploration.

The Comedy of Life
There is a vein of humour that runs through his images, and are an attempt to bring out the satire in life. He claims no influence from anyone specific, although his work is compared to the comedic styling of actor Buster Keaton. “My influences are more numerous and complex than that,” he says. One major influence in his work is French director François Truffaut. “I am quite fascinated by the brutal emergence of the extraordinary in the everyday life that Truffaut brings out. This allows me to think of our life as a film in progress, whose director and principal actors are us!” A diver would swim to Philippe and give him oxygen whenever he required it. To achieve stillness in the image, they would have to wait until the bubbles and sand would  clear. Photograph/Philippe Ramette

The Road Ahead
Ramette has not made any new images since 2008, but he has not given up on photography just yet. “I have ideas that are not precise enough for me to act. Meanwhile, I have collaborated with choreographer Fanny Chaillé for a dance that we will soon take to New York.” For a man who is pushing the boundaries with his photographs, you can only wonder the delights that his future projects will bring. “I am in a period that I call reflection!” he says, which immediately brings me to imagine him perched precariously on another precipice, contemplating his next ingenuous visual treat. The perfect setting is vital to ensure that the irrationality behind Philippe’s act comes out. Photograph/Philippe Ramette

Gadgets and Gear
• Marc Domage uses a Hasselblad for photographing Philippe’s concepts.
• All the images involve Philippe’s metal or wooden sculptures which allow him to be positioned atop various surfaces.

Tips by Philippe
• Having a clear idea of what you want goes a long way in perfect execution of your creative vision.
• Laziness is a good thing. Through laziness, you approach a kind of meditation, which is essential for photography.

About Philippe Ramette
Born in 1961, Philippe is primarily a sculptor who lives and works in Paris. He grew up in the town of Dijon and carries very strong memories from there. The horizontal escalations, the irrational walks are all influenced by his childhood. 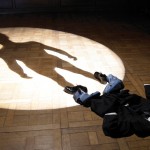 Despite the elaborate measures taken to make his images, there is a certain sense of simplicity that reflects in Philippe’s work. Photograph/Philippe Ramette 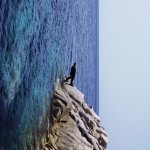 Philippe’s images are reminiscent of superhero comics and in that sense, aspirational. Photograph/Philippe Ramette 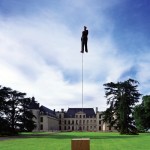 The images he makes invoke a sense of nostalgia and sometimes take you back to your childhood days of vivid imagination and  wonderment. Photograph/Philippe Ramette 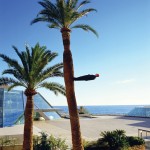 Philippe’s attention to detail is so meticulous that he even has to have his hair set in place, for the illusion to look  complete.