The Many Faces of Tehran Masoud is known for juxtaposing strong architectural shots with human subjects. It is a theme that continues to recur in his work. Photograph/Masoud Gharaei

Masoud Gharaei takes Conchita Fernandes on a stroll around Tehran, as he talks about its people and the reason why he loves to make pictures of them.

Marjane Satrapi’s Persepolis, an autobiographical graphic novel, recounts the tumultuous overthrow of the corrupt Shah during the 1979 Islamic Revolution in Iran, and how it affected her life and that of her family. In the movie Argo too, viewers witness the wrath of the Iranian people, after the former United States President Jimmy Carter provided asylum to the defeated Shah.

In both these instances, the reader and the viewer are given a one-sided view of Iran—a political one. Very little is said or depicted of the country’s rich historical and cultural traditions. Unfortunately, this negative image has stuck with it since the 1970s, and very little has changed since then. However, thanks to an increasing number of young emerging Iranian street photographers, the way the world perceives Iran today is slowly but steadily changing One of the men responsible for this is Masoud Gharaei.

Creating a Sense of Nostalgia
I remember the first time that I stumbled upon Masoud’s photographs. It almost felt like I had entered one of the bylanes in Tehran. Also, having grown up in the Middle East, the images evoked different feelings within me. The visuals of the little cafes and the old timers gathered for a chat, reminded me of my trips to the marketplace in Kuwait, when I was young. Masoud has recorded this and several other interactions, and has woven them together to give his viewers an insighful peek into his world. I prefer shooting in black and white because it brings the subjects into focus. I just find colours very distracting. Photograph/Masoud Gharaei

Making a Choice
One look at his images and you will never guess that he is in fact quite new to the world of photography. I was surprised to learn that he started shooting just about two years ago, and it has been only a year since he began using his cellphone to make images. There was a reason to this.“Before taking up street photography full-time, I was an Art Director at a magazine. I spent a lot of time stuck in the office working, and had no time to shoot.” At this point, he had to make a choice between photography and his job. Masoud chose photography. This desicion has not just allowed him to devote his time towards something that he loves. His photographs of the bustling streets of Tehran have resulted in several exhibitions and his inclusion into Rooz Daily—an Iranian photography collective.

Dispelling Preconceived Notions
What I like the most about Masoud’s work is that his images dispel any stereotypical ideas that you may have about Iran. Here, I am not just talking about his photographs of bare-faced women, but of the way he has shot the everyday interactions in the streets of Tehran. It tells you that Iran is more than a country filled with protestors constantly rallying against the west, and neither is it as conservative as the media makes it out to be. To this Masoud comments, “Thanks to the political struggles and also the false images produced by the media, most people have a very negative view about Iran. This is why in my pictures, I try to show both the sides of my country—the beauty and its drawbacks.” Street photography is all about instincts. When you’re out shooting, you need to let your instincts take over you. Otherwise, you’re going to miss your shot. Photograph/Masoud Gharaei

Dealing with Restriction
When asked about how open Iranians are about having a camera pointed at them, he talks about how uncomfortable people get with DSLRs. “I have been arrested several times for my photography. It really used to bother me. I hope that this culture of photography in my country changes soon, and that my people become less afraid of it.”

A New Change
However, as soon as he embraced the cellphone, Masoud uncovered a new pathway to the very same people who detested him for photographing them. This time around, they did not care and he slowly became a part of their daily activities. This just did not result in better photos, but it also meant that he didn’t lose out on important moments. Moreover, he wasn’t afraid of getting arrested or picking a fight. But every now and then he encounters a disgruntled woman. “When this happens I try my best to talk her out of it and convince her to let me keep the photograph.”

Masoud knows that it will be a while till people begin to see Iran for its actual self. In the mean time, the 27-year-old photographer is going to continue making engaging visual stories of his people.

This article originally appeared in the August 2015 issue of Better Photography.

• Camera Does Not Matter: Remember that great moments are not necessarily captured on expensive cameras. So, don’t stress on the quality of your device.
• Review and Introspect: Every now and then, ask yourself why you make the type of photographs that you do. If you don’t have an answer then it’s time to move on.
• Don’t Forget to Smile: When you’re out shooting, it helps to have a smile on your face. You will appear less mysterious and more approachable.

About Masoud Gharaei
After quitting his job as an Art Director of a magazine, he continues to make his living through industrial photography and by shooting street photographs. His favourite movies are The Godfather and Citizen Kane, and he enjoys the works of William Shakespeare and Federico Garcia Lorca. Whenever he feels tired and uninspired, he listens to music for a quick pick-me-up. 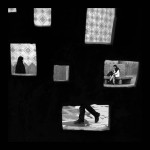 Although he has photographed most of the streets of Tehran, Masoud does not feel uninspired. He is of the opinion that the dynamism of the street always leaves room for something new and dramatic, every single time. Photograph/Masoud Gharaei 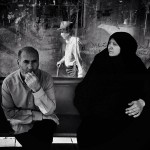 Masoud uses Snapseed and Photoshop to edit his photographs. However, he only restricts its use to controlling the brightness, contrast and the different filters available. Photograph/Masoud Gharaei 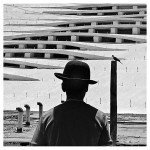 He started off his cellphone by making pictures of men in hats. They were his first subjects. “Whenever I took pictures of them, I felt like I was recording one moment of my own life. Those men are the heroes of my photos,” he says. Photograph/Masoud Gharaei 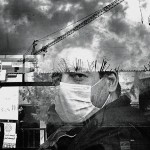 Masoud likes to show his photographs as he sees them. This is why, during the editing stage, he does not remove a single scratch because he feels that it’s as much part of the city as he is. Photograph/Masoud Gharaei 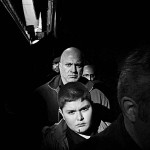 Instagram has been a great learning opportunity for him. He talks about how incredible it is to receive feedback from people he admires so much. Photograph/Masoud Gharaei 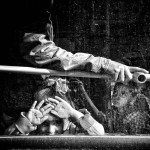 He prefers using the iPhone over other cellphones because of its fine tuned photography applications and the device’s fast processing speed. Photograph/Masoud Gharaei 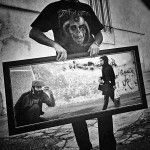 Masoud finds street photography to be very invigorating. “I think the most striking feature of the genre is that it is always on the move. There is no room for hesitation. You have to be quick, accurate and careful, and this is exactly why it’s so energising,” he says. Photograph/Masoud Gharaei