Taken with a LensBaby in Nevada, USA, this is a photograph of the alternative arts fair known as the Burning Man. The fair has become a showcase for obscure, outrageous and odd art. Photograph/Benjamin Krain

You cannot help but be awestruck by the photos of Benjamin Krain. Ambarin Afsar finds that his opinions have the same compelling effect.

The city of Little Rock, Arkansas, USA, has an extremely lucky photojournalist called Benjamin Krain. Beginning as a photo intern, Krain got what people dream of having—a really stable job just after they finish college. He has worked with the Arkansas Democrat-Gazette, a local newspaper—one of the oldest published newspapers in the area—for 15 years. “It is my first and only photography job. I must have impressed someone because they kept me around after I graduated,” he quips.

A Tough Nut
But it is not only luck or impressing the brass that has brought Benjamin Krain to where he is now. So much so that a few years ago, the Arkansas Gazette published a 16-page all-colour special section for his projects on Afghanistan and the Marshall Islands in USA. Krain’s true passion for photojournalism coupled with hard work and perfectly honed skills have contributed to such longevity in a chaotic environment. “I love photojournalism. It is about real people and real events. The pictures have content and value and some have the power to bring about change. I love being a part of that. Plus, it is awesome and I am good at it.”

The Advantages of Crazy Deadlines
Even after years of shooting for news photography, Krain finds deadlines challenging. He feels that the benefit of a newspaper job is the variety of the photographic opportunities that it provides. “It is a bit of everything—from high-school sports in bad lighting to war zones and caves. You learn to produce good pictures very quickly in any adverse situation.”

The Burning Man
Krain voices the fact that, for him, most of his photographs become more like snapshots in a family album. They are reduced to reminders of the events in his life. “I tire of my photographs easily because I lived the experience while I was shooting them,” he says, exhibiting his burning creative restlessness.

Strangely enough, his favourite photo series, ‘The Burning Man’, mirrors his own restless and free-wheeling thoughts. “The Burning Man was the most fun out of all my projects and the pictures are so strange and surreal that I still like looking at them,” says Krain about his showcase of the obscure, outrageous and the odd. Further elaborating on the series, Krain informs that each year, thousands of people gather in the Black Rock desert of Nevada, USA to partake in the ritual of burning the ‘Man’. The ‘Man’ is a 50-foot wooden and neon icon which is doused with gasoline, stuffed with fireworks and then set ablaze.

Emotional Challenges in Photojournalism
On being asked whether he has ever come across a photograph that just would not happen and took a lot of effort, he staunchly retorts, “Everyday. Patience is a virtue that leads to much better pictures.” Yet, this resilient man found himself drained as he covered the destruction left behind by the Hurricane Katrina in USA in 2005. According to Krain, Katrina was emotionally and mentally the most difficult assignment he has ever covered. “There was a bigger sense of attachment and familiarity that made it difficult for me to even walk around.” Everyone Krain encountered, regardless of whether he was taking their photo or not, had a story to tell. “I could not document the situation without having very personal interactions with these people.”

To Fake or Not to Fake
Krain thinks that despite emotional challenges, photojournalists need to ensure high degrees of integrity in their work. “The impact of a picture comes directly from the belief of truthfulness. Once the public grows cynical and mistrustful of journalism, our credibility and responsibility is lost.” Although photographers are the keepers of this faith, Krain feels that publishers also need to give them the freedom and the resources to make accurate and insightful pictures. Interestingly, Krain also enjoys fashion photography because for him, it is the complete opposite of photojournalism. “Everything about it is fake, which makes it a nice change of pace from my daily work. Plus, it is totally about beautiful women.”

The Marriage of Fine Art and Photography
Benjamin’s images exhibit an intuitive sense of composition and have achieved a sense of balance between playful and serious. Combined with an abstract play of light and an understanding of the larger issue at hand, the images appear deeply poignant and evocative. It is a strange marriage of fine art and photojournalism. Artistically inclined since childhood, Benjamin took a photography class during his junior year at college. He changed his major to journalism to get an internship with a newspaper. But it was the art classes that shaped his style of photography. “Studying fine art photography gave me an edge above traditional photojournalism as it strengthened my compositional skills.”

The External Influence
For Krain, the works of legendary travel and documentary photographer David Alan Harvey and noted photojournalist Alex Webb are probably the biggest influences on his photography. They were such a huge inspiration that he wanted to meet them to observe how they work. “David really pushes his theory of authorship, which helped my photography take a big leap forward.” Put simply, the theory of authorship is merely the awareness that anyone can make a technically perfect image with a camera. But, to make evocative pictures that convey a definitive message, one needs to be an author or a poet, not a technician. When asked what made a great image for him, Krain said that it was hard to describe the ultimate image. He feels that one would instinctively know a great image when one sees it. “The old saying that a picture is worth 1000 words is definitely true. But a history scholar once told me that some pictures are worth 1000 pictures. This really sums up the power of photography. Great photographs not only inform, but influence the public.” 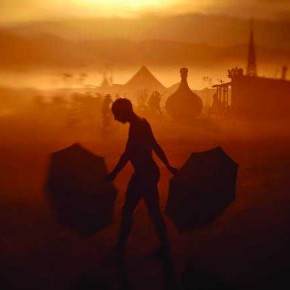 Taken with a LensBaby in Nevada, USA, this is a photograph of the alternative arts fair known as the Burning Man. The fair has become a showcase for obscure, outrageous and odd art. Photograph/Benjamin Krain 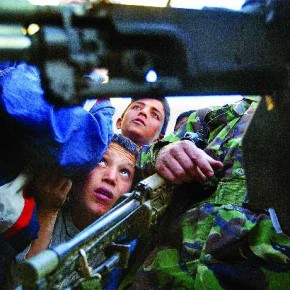 British soldiers with NATO’s International Security Assistance Force are surrounded by a crowd, while on patrol through villages in rural eastern Kabul. Photograph/Benjamin Krain 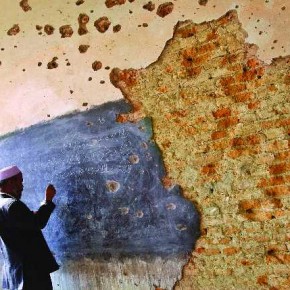 An instructor at Habibia High School in west Kabul writes on a bullet-riddled blackboard. The school was once a major battleground during civil war fighting in the 1990s. Photograph/Benjamin Krain 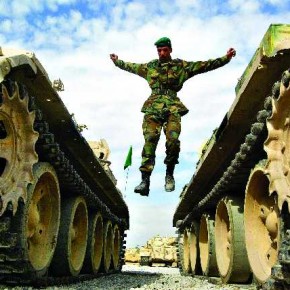 An Afghan soldier jumps from a 1960s era Soviet T62 battle tank while learning to repair them during training in the new Afghan National Army. Photograph/Benjamin Krain 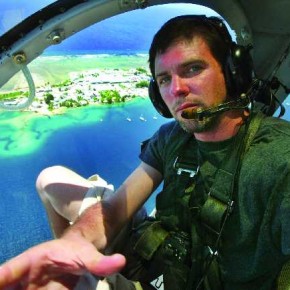 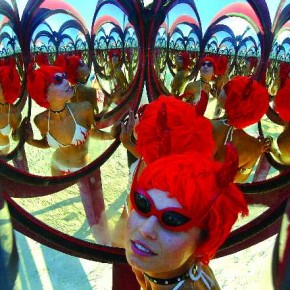 This image portrays the general vibes of the Burning Man festival, where the rules are few and the possibilities are endless. Photograph/Benjamin Krain 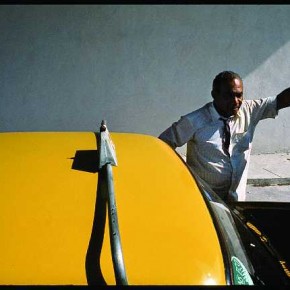 A federally employed taxi driver refuels his car with propane at a gas station near Havana. The short supply and high price of petroleum have led to the use of natural gas. Photograph/Benjamin Krain 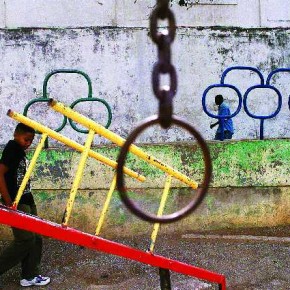 Havana is the largest city in the Caribbean and the center of all things Cuban. It is crumbling and is held together only by its people’s pride and by the fact they have no alternative. Photograph/Benjamin Krain 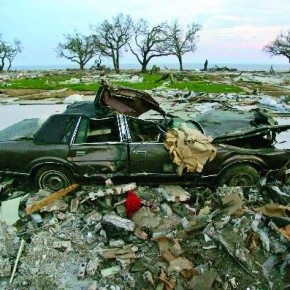 Taken in 2004 when the Hurricane Katrina struck USA, it shows the destruction done by the hurricane in coastal Mississippi, splintering buildings and killing hundreds of people. Photograph/Benjamin Krain 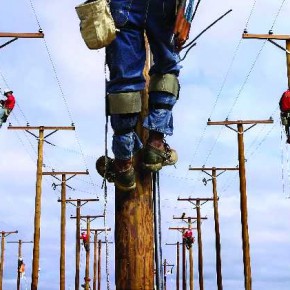 This image was taken in the Meter Pole Makeup Event, in Little Rock, USA. Linemen from around Arkansas show their skills in constructing, operating and maintaining power line systems on specially installed poles. Photograph/Benjamin Krain