Saibal explores the everyday truths of circus life, rather than deliberating upon its spectacular character. Photograph/Saibal Das While turning the pages of Saibal Das’s Circus Girl, I beheld an occult world, a world full of unknown secrets and mysteries. As I scanned one image after the other, I felt an energy resonating from the black and white photographs. I admired the skillful coalescence of Saibal’s persuasive imagery with the lyrical text of Nola Rae, an acclaimed performance artist. The fervent gaze of the circus girls bore into me, as it simultaneously brought back memories of girlhood. Powerful, potent and thoughtprovoking, Circus Girl cast a charming spell upon me.

A Labour of Love
What does it take to make an exultant photo project? Well, this question was always on my mind, and after seeing Circus Girl, I could not help but quiz Saibal on the same.

“Making a project is not a hit-and-run thing. It is a far more nuanced and in-depth experience. In addition, it teaches one to work on a self-imposed deadline. You learn to work as a photographer, a creator, a visionary, all at the same time,” he says. While working on the project, Saibal travelled for more than a year and photographed some of the most prominent circuses in India. His journey began in Jaipur, and picked up pace in Kolkata’s Park Circus Maidan.

“Living in the circus is tough and sporadic. I used to photograph everyday while documenting the nomadic circus life. I was guided by my own vision, and explored something new every day.”

“I used to photograph every day while documenting the nomadic circus life. I was guided by my own vision and explored something new each day.” His images bridge the gap between the realities and pretences of two parallel worlds. Photograph/Saibal Das

Outsider vs Insider
Photography is balance. The harmonious juxtaposition of objectivity and subjectivity distinguishes a good photograph from a great photograph. But, how does one attain this perfect equilibrium? Is observation just as important as friendship?

“Well, yes, absolutely. I photographed the circus in Jaipur as a visitor. However, as I began travelling with troupes from all over the country… my experience evolved from that of an outsider to a welcomed insider. As my subjects started to open up, I became more of a friend than a photographer to them,” he says.

Memories of Yore
Saibal grew up in a culture of photography, and began photographing at home. In many ways, he still retains the charms of an esrtwhile tradition of making images. And till today, he fondly recollects the times when he used to photograph with his family members.

“My father Sasankasekhar Das and uncle Panchanan Dutta owned a camera, and they would constantly make pictures at home. We had our very own projector and every once in a week, the entire family would gather and watch the visuals together,” he says.

In fact, Saibal’s interest in the circus originates from his earliest childhood memories. “I remember how, every winter, the circus came to our little hometown of Chandernagore in West Bengal. Through the day, performers, clowns and all sorts of exotic animals would move through the town announcing their long-awaited arrival. Those were the days of magic and glitter!”

“I interacted with Raghu Rai, Pablo Bartholomew and Prashant Panjiar, who helped shape the project.” The juxtaposition of age, gender and vantage point highlights the distinct role of every individual in the circus. Photograph/Saibal Das

Coming Full Circle
Circus Girl stands for Saibal’s journey from an inquisitive youngster to an ardent photographer. His images document the “backyard of magic”, and manage to say something original on an oft photographed subject matter. “Circus Girl was born out of the blue, as I began to photograph after being awarded the National Media Fellowship in 1996.”

“I interacted with Raghu Rai, Pablo Bartholomew and Prashant Panjiar, who helped shape the project. Over the years, I saw Circus Girl grow from a nascent idea.” As I leafed through the book once again, I began to comprehend the depths of this exquisite spell. I seized a wonderful idea, witnessed a discerning method and beheld a graceful implementation.

I found many of my questions answered as I savoured the treasures of an effective conversation. What does it take to make an exultant photo project? Why should we not let our dreams die? Why should we walk that extra mile? What makes a good photograph? Why must we keep looking through the viewfinder? And, why should we continue making magic? • He develops prints from the comfort of his home, while working in his own darkroom.

• Do not jump on your subject with a camera during the first few days. Before you begin to shoot, expose yourself to the subject and their surroundings.

• Carry minimal gear when you photograph. Try not to be very conspicuous with your mannerisms and body language.

He has worked for The Telegraph, India Today and Outlook before he became a freelance photographer. He admires the works of Josef Koudelka, Michael Ackerman, Raghu Rai and Prabuddha Dasgupta amongst others. 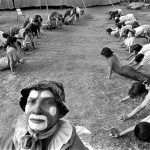 Saibal’s images are reflexive and profound because of an unmistakeable use of irony. Photograph/Saibal Das 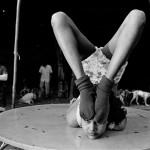 Life in the circus seems to be an arduous journey of countless ups and downs. Photograph/Saibal Das 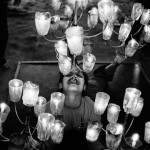