Some of the birds I came across would get aggravated if their young were around. This is one of the rare instances where I didn’t face that situation. Photograph/Giacomo Brunelli

Giacomo Brunelli revisits his childhood love for animals by making quirky, unusual photographs of them on streets.

Growing up, I was surrounded by animals. I love animals. As a child, I would actually collect them, adding to our family pets much to the chagrin of my family. This series was a way of reconnecting with animals—just as I used to play with them as a child, aiming my camera at them is a way of playing with them as a grownup. The images are dodged and burned a little in the dark room, just enough to highlight certain areas. Photograph/Giacomo Brunelli

My Perspective
Animals is the first series I ever did, it was also the most spontaneous. After finishing a photography course, I was looking for a subject. I had shot other subjects like landscapes, but I had a certain mood in mind that needed to fit something in particular.

The series started when I first photographed a cat jumping off a tree in Italy. That is when I noticed that my camera is very noisy. When I press the button, the shutter makes a noise that the animals react to. This response is my way of photographing my interaction with them. This dog had blue eyes and was probably partially blind. As he couldn’t see me he was scared by my presence, even though I was standing far away from him. Photograph/Giacomo Brunelli My cat brought me this mouse. I juxtaposed it with something pretty, as I wanted to depict life and death in one frame. Photograph/Giacomo Brunelli

The Process
The first part of the series was shot in Italy and the second part was shot in the UK. I would wake up at dawn and drive or walk until I found an animal. I would then compose the frame such that the background and light fit the mood I was in.

Sometimes I would come across a situation where an animal would scare me or people would chase me off their property. But then, this is something I strongly feel about… you have to be willing to take risks to make good photographs. A lot of times, you have to have a sense of space and light. You have to be prepared for anything to happen. Photograph/Giacomo Brunelli

Considering how different these images are from the conventional animal photographs, I was surprised at how well the series was received in different countries. I think this is because the love for animals is universal. Usually I try to get reactions from the animals. However, in this case I waited for 20 minutes for the horse to get up. That is probably what makes this photograph so quiet. Photograph/Giacomo Brunelli

My Equipment
I used a Miranda Sensomat with a 50mm lens and Kodak Tri-X 400 film. For the prints I used standard chemicals, paper and a very old enlarger.

To view more images from Giacomo’s work, you can visit his website www.giacomobrunelli.com 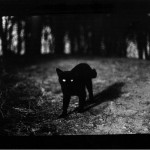 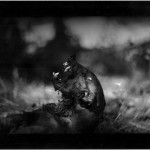 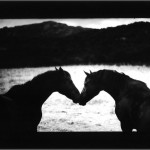 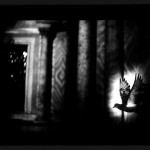 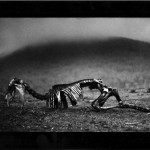 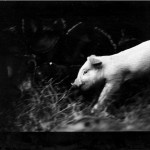