Children hold on to a ‘house full’ board, as they wade through a flood in Mumbai,1990s. Mukesh believes that photos carrying a humorous undertone can be quite impressive; but equally tough to portray in news. Photograph/Mukesh Parpiani

Ace photojournalist-turned-gallery curator Mukesh Parpiani prefers to portray the true essence of society and politics. He shares his experiences and beliefs with Digantika Mitra.

This story was originally published in May 2012. There comes a time in the life of every photojournalist when he needs to use his entire sense and sensibility to capture an important moment, in a fraction of a second. Mukesh Parpiani recollects such a moment in his career as a photojournalist. Mrs Indira Gandhi, the then Prime Minister of India (mid-80s), was visiting the riot-affected areas of Bhiwandi, Mumbai.
At one relief camp, Mukesh noticed a woman holding a child in her arms, pretending to cry and seek Mrs Gandhi’s sympathy. The woman pinched the child so hard that it began to cry. Mukesh was standing right behind her, when he saw Mrs Gandhi studying the woman’s pretence rather than her tears. He shot the moment the woman pinched her child and also captured Mrs Gandhi’s facial expression. The result was a brilliant photograph. “It was such an interesting moment. It just could not have been pre-planned,” says Mukesh.

A Realist at Heart
As a photojournalist, Mukesh Parpiani’s main objective has always been to mirror the truth, the reality of his times and the society as it is. “Record the truth as it exists and appears in front of the camera,” he adds. “The camera does not lie, but it seizes the truth.”
From the Bhopal Gas tragedy in 1984 to the Mumbai riots in 1992–93—Mukesh has portrayed the nation during its most significant and critical moments, with the precision and passion of a realist.

“ Today’s readers are intelligent. By adding unnecessary spice to your photograph, you cannot take them for a ride.”

No Exaggeration Please
Mukesh believes that it is every photojournalist’s responsibility to refrain from showing unnecessary blood and gore. “Don’t make the photograph of violence a six-column head when two columns are sufficient,” he advises.
He remembers the bomb blast at the police headquarters in Delhi in 1997. Many newspapers had published a disturbing picture of a plain-clothed policeman holding a man’s severed head by the hair—which he suggests, could have been avoided.“Today’s readers are intelligent. By exaggerating or adding unnecessary spice to your photograph, you cannot take them for a ride.” Hasina Aapa, don Dawood Ibrahim’s sister, attends the wedding of her nephew in 2004. In Mukesh’s opinion, one has to be alert enough to click the right moment. Photograph/Mukesh Parpiani

Portraying Mumbai Policemen
Between the 1980s and 1990s, the Mumbai police used to travel only on two-wheelers. Their uniforms and attitude were quite different, and they were never as heavily guarded as they are today.
Mukesh has taken many photographs of Mumbai’s policemen, which have been published in different newspapers he has worked with. In 2007, the Mumbai Police Organisation put together a coffee-table book called Mumbai Police, for which they invited Mukesh to contribute some of his early photographs. This one-of-a-kind coffee-table book contains mostly his images of the police men and women in different moods, situations and settings.
“If I get a good sponsor, I would love to do a second volume that portrays and pays tribute to the Mumbai police of the 21st century,” he expresses.

Of Important Transitions
After leaving The Daily, Mukesh joined The Indian Express as Photo Editor. There, he built a team that catered to 17 editions of the paper all over India. Even today, that team continues to work on the templates and patterns designed by Mukesh.
When he moved to Mid-Day, he encountered an interesting challenge—switching from film to digital. There too, he formed a team of about 12 photographers and provided a digital camera to each of them. “My team won several awards,” Mukesh looks back. “I feel satisfied when I see the Mid-Day team still following my legacy.”

As Gallery Head
Today, Mukesh is concentrating on his newly acquired role—Head of Piramal Art Gallery at the National Centre for Performing Arts (NCPA), Mumbai. “I’ll be using this platform for grooming talented photographers and bringing the best out of them. I will be teaching photojournalism and inviting experts in the field to share their ideas. I will also be hosting workshops conducted by wellknown figures from different branches of photography.”
Mukesh still continues to shoot around the city, whenever he has the time. “I now want to take photographs from the heart rather than from the head. I hope by the end of 2009, you will find a newly transformed artist in Mukesh Parpiani, who was once upon a time a news photographer.” Mrs Indira Gandhi’s entourage tries to ensure a rain-free path for the then Prime Minister. “Such pictures carry the potential for a good story,” Mukesh says. Photograph/ Mukesh Parpiani

About Mukesh Parpiani
Mumbai-based Mukesh has worked with three newspapers: The Daily, The Indian Express and Mid-Day.  Currently, he is the head of Piramal Gallery at the National Centre for Performing Arts (NCPA) in Mumbai.  Today, he indulges in street photography. He finds India’s diversity to be an interesting subject for photographers. 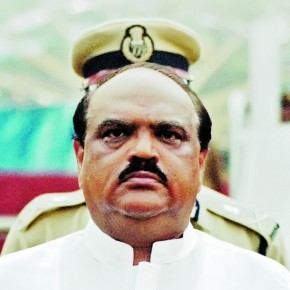 Chhagan Bhujbal stands tall as he is sworn in as Deputy Chief Minister of Maharashtra. Mukesh at times adds a touch of satire or humour to his photojournalistic images. Photograph/Mukesh Parpiani 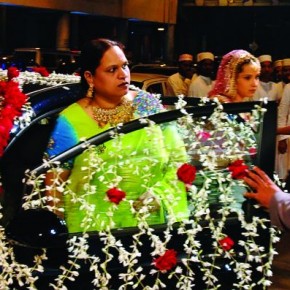 Hasina Aapa, notorious don Dawood Ibrahim’s sister, attends the wedding of her nephew in 2004. In Mukesh’s opinion, one has to be alert enough to click the right moment. Photograph/Mukesh Parpiani 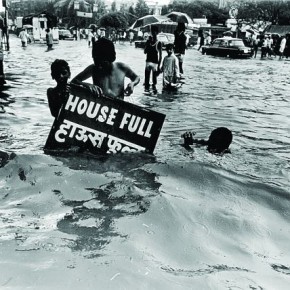 Children hold on to a ‘house full’ board, as they wade through a flood in Mumbai,1990s. Mukesh believes that photos carrying a humorous undertone can be quite impressive; but equally tough to portray in news. Photograph 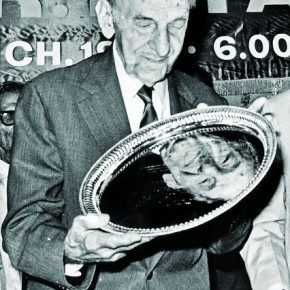 J R D Tata glances at the Bharat Ratna trophy he was awarded in 1992. Mukesh released his camera’s shutter in a flicker of a second when he saw the reflection. Photograph/ Mukesh Parpiani 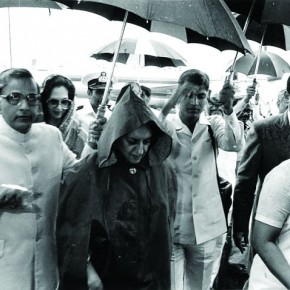 Mrs Indira Gandhi’s entourage tries to ensure a rain-free path for the then Prime Minister. “Such photographs carry the potential for a good picture-based story,” Mukesh says. Photograph/ Mukesh Parpiani 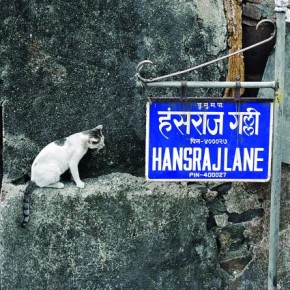 Today Mukesh indulges in street photography and concentrates on taking images from the heart rather from the head. Photograph/Mukeh Parpiani 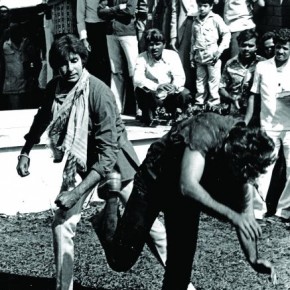 Amitabh Bachchan practises a fight scene on the sets of Coolie (1983). This was taken minutes before the actor’s infamous lifethreatening accident. Photograph/Mukesh Parpiani 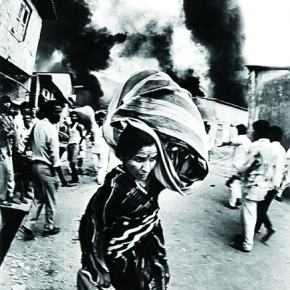 A woman flees from a riot-afflicted area . As a responsible photojournalist, Mukesh believes that whatever the situation, the truth must be conveyed without exaggerating it. Photograph/Mukesh Parpiani 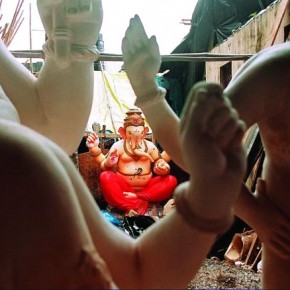 Mukesh beautifully captures a Ganesh idol which is decked up for the Ganesh Chaturthi celebrations. Photograph/Mukesh pARPIANI